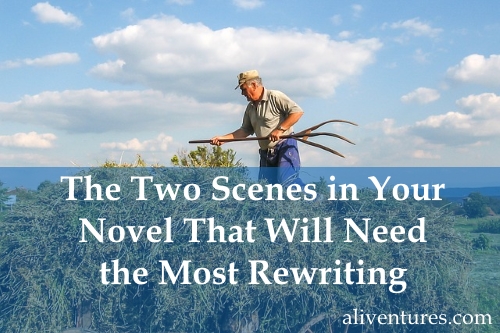 Novels are tricky. There’s so much to juggle that no-one gets it quite right the first time round … and most authors end up doing wholesale rewrites, rather than just making a few editorial tweaks.

I’ve come to accept that rewriting is just part of the process of creating a novel. Each time I start work on a new book, I want to be a more efficient writer – and while I have found some things easier, I still end up doing a lot of rewriting and reworking.

Maybe it’s the same way for you.

Whether you’re working on your first draft of your first novel, or you’ve completed a bunch of novels already, there are two scenes that you’re likely to spend a lot of time rewriting:

However hard you worked in the first draft, and however much you planned, these are just really difficult scenes to pull off well.

But the good news is – even if your first draft doesn’t quite hang together in these key areas, rewrites can fix anything!

The first scene of your novel needs to do a lot of heavy lifting. It has to get the story going – no mean feat! – and it has to establish your main character(s). At the same time, it needs to set the tone for what’s to come and it has to “hook” your reader.

Plus, unless you draft your book patchwork-quilt style, working on scenes here and there and stitching them all together at the end, the opening scene is probably the very first thing you wrote when you began your first draft. Chances are, your ideas have shifted a bit (or a lot!) since then.

The first scene of my novel Lycopolis went through about a dozen rewrites. I had several completely different versions of that scene – in the very first draft, for instance, I went with an omniscient perspective dipping in and out of all my different characters’ viewpoints. It soon became clear that this wasn’t going to mesh well with the limited close third-person perspective I ended up using for the rest of the novel.

If the current draft of your opening scene isn’t quite working, you might want to ask yourself:

Why the Climax of Your Novel (Probably) Needs Rewriting

The climax of the novel is the high point of tension/action where everything comes together. Your protagonist, after the greatest trial yet, finally wins what they were after all along. (Or, in a less happier novel, your protagonist finally fails irrevocably.)

The climax, like the opening, needs to do a huge amount of work. It has to pull together lots of different threads from your novel, and potentially quite a few different characters. In many novels, your hero has to face what seem like insurmountable odds … and s/he needs to triumph regardless. But that triumph must be earned, and convincing.

Invariably, I find that the first time I draft this scene in my novels, it falls a little flat. The action isn’t dramatic enough. The very real possibility of danger isn’t potent enough. The characters don’t struggle enough. With each rewrite, the climax involves more tension, danger and drama.

Occasionally, after the first draft, I find I’ve changed my mind about how it should all end. This happened with my second novel, Oblivion, which took a long time (my kids were both born along the way!) and where I realised that I wanted the novel to end quite differently from how I’d originally planned.

If the climax of your novel isn’t quite coming together, you might want to ask yourself:

If you find yourself rewriting your opening scene and the climax of your novel multiple times, don’t be surprised or dismayed – it’s perfectly normal to end up reworking these a lot. Other scenes in your novel might need much less attention, because they’re neither so complex nor so crucial to your novel’s structure.

With my own novels, I’ve definitely had times when I felt like I would never get these scenes finished to my satisfaction. Eventually I did! If you’re at that stage right now, hang on in there – take a break or get someone else’s input if you can, and then get back to the rewrites. Good luck! 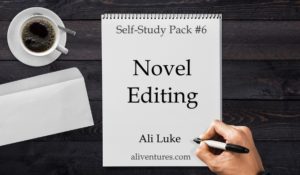 Want some help editing your novel? Check out The Novel Editing Pack, a set of self-study seminars and worksheets that’ll give you the tools you need to get your novel into shape.

The four seminars in the pack include:

You can buy it from the self-study seminars page here.