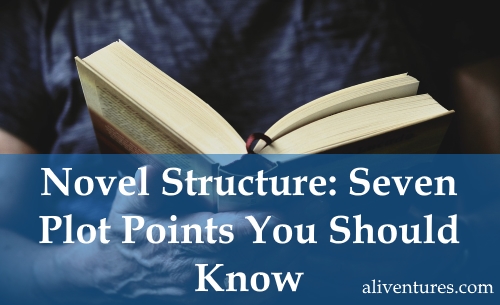 In screenwriting, there are commonly agreed “plot points” that movies are expected to follow.

With novels, you’ve got more flexibility – but many writers and theorists would argue that you should hit specific plot points at specific stages in your novel. These are the moments that move your story forward – the things you’d likely include in a summary of your plot.

There are lots of good guides to plot points out there, particularly in the world of screenwriting. For novelists, K.M. Weiland has written absolutely loads on this, including her excellent book Structuring Your Novel: Essential Keys for Writing an Outstanding Story – and you can hear her talk about novel structure and outlining in my self-study seminar pack on Editing Your Novel (#6).

But if you’re not ready to dig in deep just yet, here’s the quick guide to plot points:

What Are the Key Milestones Your Plot Should Cover?

While these aren’t the only important things in your plot, I think that if you can nail all of these, the rest of your plot should hang together pretty well!

This could be the opening line, but doesn’t have to be. It might not be a huge thing (like a dead body or an alien invasion) – just something that raises a question, intrigues readers, or makes them want to read on. It needs to come within the first few pages of your story.

At some point early in your story, probably around 12% of the way in, something should happen that sets the story in motion by breaking the status quo. This is the moment where the protagonist gets drawn into the story. It may overlap with the “call to adventure” but doesn’t have to.

The first plot point occurs around 25% of the way through the story (though this can be reasonably flexible in novel-writing – more so than in screenwriting). It’s a moment where everything changes: the set up of the story is over, and Act Two is beginning. Your protagonist is going to spend the next quarter of the book reacting to the change and its implications.

The midpoint of your novel comes – unsurprisingly! – roughly in the middle. This is where something major happens that jolts your character out of “react” mode and into action. From now on, they’re going to be actively fighting for something, whether that’s for a return to the status quo, or for a goal they’re determined to pursue.

The third plot point normally marks a low point for your protagonist – perhaps even a failure, or their darkest hour. Things won’t have gone their way, no matter how hard they’ve tried … and they might feel tempted to give up. But this is where their character development pays off: in the aftermath of this plot point, they’re newly determined to reach their goal. This is often the point at which the stakes are highest, leading into the climax of your novel.

This is the point where the protagonist faces the antagonist … and, usually, wins (though not without a struggle, and quite possibly not without a sacrifice). It’s the moment that the rest of the story has been leading up to, and it needs to be engaging and satisfying.

Stories don’t normally end with the protagonist striking the final blow against the villain. You’ll normally carry on for a bit after the climax, showing the new reality (good or bad) sinking in, and the implications of it.

Well-Timed Plot Point Are Crucial for a Satisfying Story

Plot points can sound a bit like writing by numbers … but even if you’ve never heard of them before you might well find that you’re naturally hitting these points in the fiction you’ve written.

You don’t need to count your pages and time your plot points at exactly the 25%, 50%, and 75% marks, but if you have them far off these points, you may find that your story is dragging in places.

If you’re at the planning stage of your novel, plot points are a handy way to make sure you’ve got major events happening in roughly the right places. If you’re editing, they can help you shape your story and see what might need to be cut or moved around.

If you feel that your story is lagging, or that the tension dissipates rather than builds towards the end, then it’s worth looking at the positioning and nature of your plot points to see if anything needs tweaking. This might be just what your novel needs to make it work.