What’s a Character Arc, Who Needs One, and Why? 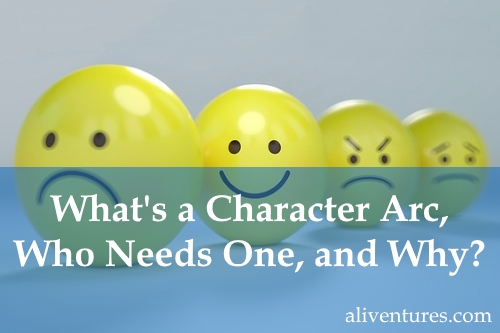 You’ve probably come across the idea of a “character arc” before now … but what is it, and why’s it called that?

A character arc isn’t the same thing as your plot. It’s the progression of your character as a person throughout your story.

It’s called an “arc” because you can imagine it plotted on a graph. Character arcs will normally follow an upward trajectory – where your character increasingly becomes a better person – though some will instead trend downward, where a character goes from good to bad, or bad to worse.

Do All Your Characters Need a Character Arc?

In fact, trying to give every single character a full blown arc would almost certainly be overkill.

Minor characters don’t need to have a character arc. They might appear on and off throughout your story (perhaps your protagonist’s overbearing mother-in-law, or her annoying colleague) – and they might not change at all during the story.

Even some protagonists won’t necessarily have a traditional character arc. In a series, for instance, the protagonist will often have a very slow character arc. They might grow and change … but they won’t resolve all their issues within a single book.

Sometimes, your protagonist won’t really change at all, as a person (though a lot might happen in the plot). Maybe they already have everything sussed and there’s no need for them to go on an inner journey. In this case, the story is about them being tested and staying true to themself, in what’s called a “flat arc”.

Why Do Character Arcs Matter?

Arguably, a character’s inner journey is the whole point of a story.

Yes, things happen in the plot – mysteries are solved, battles are fought, baddies are defeated, the world is saved – but often what really matters to both the writer and the reader is the change that all of this brings about in the protagonist or main characters.

A good character arc should help the reader believe that the character really deserves their success (or their failure, if their arc was negative – more on that in a moment).

Character arcs are also, of course, intricately tied in with plot.

Events in the plot affect your character; they respond to these events (potentially in a way that’s out of character for them); their response causes something else to happen, and so on.

Character arcs are more important in some genres that others, of course. In a series of adventure novels, readers might be invested in the protagonist’s success, but they won’t generally be expecting the protagonist to really change during the course of the story. (In fact, readers might well protest if your protagonist changes too much.)

Other genres are very much focused on the character’s inner journey, though: a lot of literary fiction falls into this category, as do “coming of age” stories. Fantasy novels will often involve a strong character arc, too, where your protagonist learns and grows significantly through the course of the novel.

What Exactly Does a Character Arc Involve?

In a short story, a character arc might be quite simple, and involve a straightforward change – perhaps prompted by a single incident. For instance, we might see a character at the start of the story who has an obvious problem (e.g. they’re grumpy – and lonely) and then something happens to change all that (e.g. they meet someone who’s kind to them and helps them open up).

In a novel, though, characters arcs will almost always be more complex. Your character might grow and change slowly – but there might be moments when they backslide. (These should have real plot consequences.)

Another option is to have a character who starts off as someone more-or-less likeable, but who becomes less likeable for a while – they side with the antagonist, for instance, or give in to temptation. They might need to hit rock-bottom before they start on the upward trajectory of their arc.

Character arcs don’t have to be positive, however. As we’ve mentioned, they can be flat – where a character stays essentially the same. They can even be negative. In a negative arc, a character might start off neutral or even good, but succumb to temptation or end up on a slippery slope of doing worse and worse things.

For lots more on character arcs, including loads of great examples and insights, check out K.M. Weiland’s excellent book How to Write Character Arcs. (If you’re not at the stage where you want a whole book yet, then there’s plenty of great advice in several blog posts on her website, including a whole series of posts that starts here.)

I’m going to pick a few examples of characters who undergo a fairly significant inner journey in their respective stories. I’ve chosen one from a novel, one from a TV series, and one from a film (and hopefully at least one of these will be familiar to you).

Example #1: Edmund Pevensie (The Lion, The Witch and The Wardrobe)

In The Lion, The Witch and The Wardrobe, Edmund starts off as – frankly – a not particularly nice boy. He’s rude and grumpy from page one, and he’s spiteful to Lucy after she tells the siblings about going through the wardrobe into Narnia.

After he meets the White Witch, he becomes even worse – selling out his siblings to her. He’s also shown as fairly unintelligent, falling for her flattery and lies.

By the end of the novel, though – after various misadventures – he fights to defend the Narnians against the White Witch and in fact is the turning point in the battle, when he’s both brave and intelligent: he goes for the Witch and smashes her wand to stop her turning anyone else into stone.

This is also an example of a character arc that restores a character to “who they really were all along” – or, from Lucy’s perspective:

When at last she was free to come back to Edmund she found him standing on his feet and not only healed of his wounds but looking better than she had seen him look—oh, for ages; in fact ever since his first term at that horrid school which was where he had begun to go wrong. He had become his real old self again and could look you in the face.

When the first Iron Man movie begins, Tony is the crazily-rich womanizing owner of Stark Industries, a weapons manufacturer. He’s in Afghanistan to show off his latest weapons to the U.S. military. But when his convoy is attacked by terrorists, Tony is wounded and kidnapped.

This is what prompts him to create a miniature arc reactor and a suit of armour – the Mark 1 – which he uses to escape from the terrorists. After seeing the destruction his weapons were causing in the wrong hands, wants Start Industries to stop selling weapons altogether. He continues to develop his Iron Man suits, and discovers that his business partner and mentor Obadiah Stane has been trying to oust him from the company.

By the end of the movie, Tony proclaims to the world that he’s Iron Man.

Plenty of things about Tony don’t change. He’s still an inventor at the end of the movie. He’s still rich. He still likes the limelight; he’s still irreverent. But his eyes have been opened to the damage his company was doing … and he’s much less self-centred than he was before.

At the start of the epic Game of Thrones series, Sansa Stark is a 13-year-old with a head full of fairy tales. She’s obsessed with the idea of marrying Joffrey (at this point, she hasn’t realised how truly horrible he is) and she’s focused on traditional “ladylike” pursuits like needlework.

During the course of the series, she goes through some truly horrific experiences (starting with her father being executed in front of her) – but she becomes a powerful, self-confident character who’s adept at playing lots of the adults surrounding her, including the supremely cunning Littlefinger.

By the current Season 7, she’s almost unrecognisable from the naive, rather self-centred girl she once was.

Whatever sort of story you’re writing, your characters need to go on some kind of internal journey.

Maybe they’ll become much better people or overcome huge problems in their lives. Maybe they’ll stay essentially the same – but their resolve will be tested.

You may find that character arc emerges naturally as you write, or you might want to plan for it (if you like to outline ahead of time). If you’re not an outliner, then the revision stage is often a good opportunity to look at and tweak character’s arcs – making sure that the changes they undergo are justified and satisfying.

For more on creating and writing characters, check out the other pieces so far in our four-week series:

#2: How Much Should You Describe Your Characters? (newsletter)

#6: When Should Your Characters Behave Out of Character? (newsletter)

You might also want to check out my “Advanced Fiction” self-study pack, which has three seminars relating to characters (Heroes & Villains; Handling Viewpoint in Fiction; Seven Ways to Add Depth to Your Characters).

You can find all the details of that, and my other self-study packs, here.