Is Writing a Novel a “Someday” Dream for You? 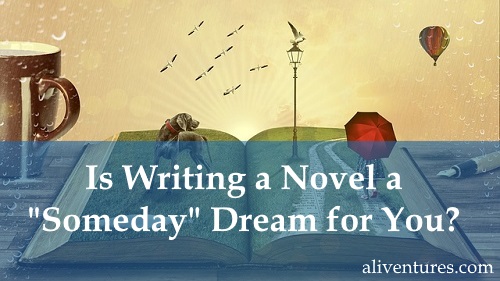 Note: This post was originally published in 2016, and was updated in January 2019.

Are you thinking of writing a novel someday?

Maybe you’re waiting because you don’t have an idea, yet.

Maybe you’re waiting because you don’t have much time, right now.

Maybe you’re waiting until you feel more confident: until you’re a good enough writer to tackle the challenge of a novel.

I’d like to – gently – suggest that perhaps it’s time to stop waiting.

Yes, a novel is a big undertaking. Yes, your life is hectic and you don’t feel ready and there are a dozen good reasons to wait.

Here’s why I think you shouldn’t.

You’re Denying an Essential Part of Yourself

For most writers, particularly novelists, writing isn’t just something they stumbled into. It’s almost never something they began doing for the money.

Writing is something essential to who they are. It’s a crucial part of their identity. It helps them feel happy and whole.

If that’s how you feel about writing (or if you suspect that might be how writing would be for you, if only you’d let it into your life) … then please don’t spend years denying yourself the opportunity to write.

You’re Waiting for a Day That Will Never Come

While there will no doubt be a particular day ahead where you do have more time available (retirement is, for most people, the key one) … that might be years in your future.

And if you’re not writing now, you may well find that your life somehow fills up with all sorts of other things. You may never have time to write.

Confidence and inspiration are even trickier. I’ve known quite a few writers put their dreams on hold until retirement, only to worry that they’re “too old” to get started now. And plenty of writers will know what it’s like to sit down in front of a blank screen or a blank sheet of paper, feeling completely uninspired.

You’re Not Going to Get “Good Enough” by Not Writing

I’ll be the first to admit that writing a novel is hard. It is, for me and I think for most writers, far harder to write a good novel than to write good non-fiction. You need to master lots of different skills – from the word-level knack of writing really great, fluent prose to the big-picture ability to create a plot and character arcs.

There are plenty of resources out there that can help, from books to courses to whole degree programmes.

Unless you write, though – unless you do your best to create a novel, however much it falls short of the ideal you had in your head – you’re not going to get any better at writing.

Yes, you could write short stories or blog posts or freelance pieces for years in the hope you’ll become “good enough” to tackle a novel. You’ll definitely pick up some skills that way. But until you actually embark on your first novel, you won’t be making the progress you should be.

If You’re Waiting for an Idea…

First, be honest with yourself. Many novelists have an idea bobbing around in their head – perhaps for years and years – before they dare set words down on paper. Have you got an idea that feels too big, too difficult, too precious to waste your imperfect words on?

That’s the idea you should be tackling.

Second, if you really don’t have an idea for a novel, don’t just sit and wait for one to miraculously appear. Hunt it down. Read lots of books: soak yourself in words. Seek out inspiration in other art forms: music, art, whatever works for you. (And it doesn’t have to be highbrow. I listen to a lot of heavy metal when I’m feeling uninspired.)

If You’re Waiting for Time…

Writing a novel won’t necessarily take as long as you think. If you can write 1,000 words in an hour (which is fast but far from unachievable), you can draft an 80,000 word novel in 80 hours.

If you work for just 30 minutes per day, you’ll have that first draft done in around five months.

While that’s not quite NaNoWriMo levels of impressive, it’s pretty good! You could have a good, polished second draft after a year.

I’ve got two young children (currently nearly-6 and just-turned 4) and I do understand how much of an issue “time” is when it comes to writing. For months after the younger one was born, I wrote in 15 minute chunks, if at all!

But unless you’re going through a genuinely temporary time crunch (new baby, huge work deadline, uni finals), you can figure out a way to fit in some writing time.

What could you do less of? If meal prep takes up a lot of time, for instance, can you batch cook and rely on ready meals a little more often? I

What could you stop altogether? Is there a voluntary role you could step down from? (I did just that last week.) Can your spouse or older children take on specific chores?

If you can find just two hours a week to write, you’ll have your novel’s first draft finished in around eight months.

If You’re Waiting for Confidence…

I feel a little mean here, but I think I need to tell you this: you’ll probably never feel totally confident. I still wonder whether I’m “good enough” to write novels … but I do it anyway, because I love it, and because I definitely won’t become good enough by hiding under my duvet!

Sometimes, it helps to realise that most writers (and other creative-types) don’t feel particularly confidence. Joanna Penn writes very honestly about her own crises of confidence in her encouraging book The Successful Author Mindset. I really admire Jo, who has had huge success in her business over the past few years: it really helped me to realise that she faces the same self-doubt as every writer.

One of the best ways, in my experience, to become more confident is to keep taking action. Outline your story. Get to know your characters. And start putting those words down on paper.

What are you waiting for? What’s holding you back from starting on your novel? Drop a comment below to tell us. 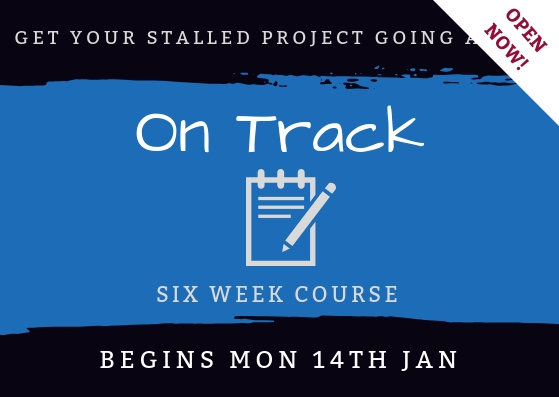 Quick reminder: My latest online course, On Track, begins today. (Registration is open until the end of this Friday.) When you sign up, you’ll get sent the Welcome pack and Module #1 straight away, so the sooner you join, the sooner you can get going.

If you’d like some help turning your novel from a “someday” dream into something you’re taking action on, then we’re here to help! You don’t have to be a novelist, either: On Track is open to all writers, including bloggers, freelancers, non-fiction writers and more.

You can get all the details, and join us, here.