Anti-Heroes and Villains: How They’re Different & Tips for Writing Them Well 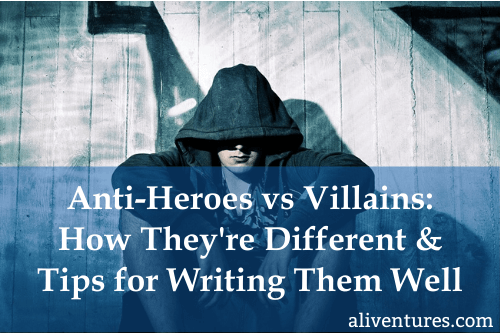 This post was originally published in December 2016 and updated in June 2020.

At what stage, though, does a dark hero (aka “anti-hero”) turn into a villain?

The line between them can be blurry, and is as much about story role as it is about morality.

Some characters can be tricky to categorise, and may potentially move from one role to another – especially in a series of connected works. (In the Marvel movies, for instance, Loki is arguably an anti-hero in Thor and a villain in Avengers.)

In writing and literary circles, you’ll often hear “protagonist” and “antagonist” being used instead of “hero” and “villain” because these are a bit more emotionally neutral and describe a function within the story rather than a type of character … and this is the framework we’re going to use.

Let’s take a look at anti-heroes vs villains, and how to write them well:

The classic hero – think Captain America, in the Marvel films – tends to be brave, good looking, morally upright, strong (if male) … and so on.

Most regular heroes do have flaws, but these don’t make up the bulk of their character, and they tend to be things they overcome during the story.

So what’s the definition of an anti-hero?

Anti-heroes subvert expectations. They’re – just about – on the good side of things, but they may not be pleasant people, and they might well resort to some shady tactics to get things done.

They’re a good way to avoid the common writing problem of creating “flat” or two-dimensional characters: ones that don’t have much complexity.

They may change a bit during the course of the novel. However, they’re unlikely to become a completely straightforward hero, because that would make their character virtually unrecognisable.

Some of my favourite examples of anti-heroes are:

In stories with a romance-based plot (ending in a marriage/relationship), there’s often a heroine who’s the main viewpoint character but also a male lead who we call the “hero”. These heroes, too, can be anti-heroes:

Villains, like anti-heroes, can run a fairly wide range. You could position them pretty much anywhere from “misguided and misunderstood” to “pretty nasty but with some attractive qualities” to “horrific with no redeeming features”.

In some novels, there isn’t a villain at all. There is an antagonistic force, but it’s something more like society’s expectations or terrible weather – something impersonal that causes the protagonist’s struggle.

Sometimes, the villain may not be the primary antagonistic force. They might play a smallish role, but the main struggle the character faces is against something else.

There may also be a villain and a greater, more evil villain (in which case the less-evil villain can potentially step into an anti-hero role).

I like villains, whether they’re the snarky-misunderstood sort or the truly evil sort. Here are some of my favourites:

Villains can be very tricky to do well, especially as they tend to get much less time on the page than the hero/anti-hero. In many stories, the villain works in the shadows or isn’t really recognised for who they are till part-way through.

A few things to keep in mind:

If you want to write a dark anti-hero or a villain on the redeemable end of the spectrum, that may require having a greater evil (e.g. societal, environmental, supernatural) that everyone is fighting against. In my Lycopolis trilogy, for instance, Seth occupies the dark end of “anti-hero” territory, and – along with the rest of the characters – ends up fighting against supernatural evil.

Anti-Hero vs Villian: Which Fits Your Character?

If your character is ultimately on the side the reader will be rooting for, then they’re an anti-hero. If you feel that they’re becoming too close to being a villain as you write or even as you initially develop your characters, you could:

Rich, complex characters are fun to write and fun to read. Creating an anti-hero can be a challenge, but hopefully a rewarding one.

If you’d like more help with writing heroes (not just the anti- type!) and villains, you’ll enjoy Lorna Fergusson’s seminar “Heroes & Villains” in my Advanced Fiction self study pack.