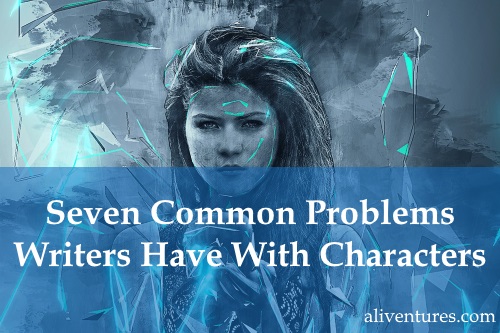 Most writers love creating characters and writing about them – but it can be a struggle to get characters right.

If you’re normally quite plot-focused, you might find yourself creating characters who are lifeless “pegs” that fit into the right-shaped spaces in your plot.

If you’re much more character-focused, you might struggle with the size of your cast (more isn’t always better!) … or you might find it really difficult to let your characters suffer and struggle.

In today’s post, we’re going to look at seven common problems that writers struggle with … and some ways to get past them.

Problem #1: Creating Characters Who Are Three-Dimensional

If you’ve been writing fiction for a while, you’ve probably come across the advice to avoid writing “flat” or “two-dimensional” characters. These are characters who don’t really seem to come alive. They might seem a bit boring, thin, or shallow to the reader: there’s no real depth to them.

This can be a tricky issue to spot in your own writing – but if you’ve been told that your characters seem “flat” or unengaging, or if you suspect that characterisation isn’t your strong point, you might want to:

Not all characters need to be well-rounded, of course. Characters who only appear briefly and aren’t important to the plot shouldn’t be too fleshed-out (or your reader will start to think that the taxi driver or waitress or bank manager are more important to the plot than they actually are). In some genres, too, flat characters make sense: comic characters might be known for one or two funny or exaggerated characteristics, and don’t necessarily need to be rounded out.

Some stories have a tight, focused cast of characters – but others are sprawling epics. (Game of Thrones, anyone?)

If you’ve got lots of characters – particularly lots of main or viewpoint characters – then it can get tricky for your reader to keep track of everyone. It can also create problems with the reader’s engagement: perhaps they really enjoy reading about two of your characters, but they’re not very interested in the other six that you keep bringing in.

To thin down your cast a little, it’s worth asking yourself whether you really need so many characters. Do you have to bring in two brothers for your protagonist, or would one be enough? Does that grumpy woman who lives down the hall have any real impact on the plot?

Walk-on parts don’t count here. No-one’s going to be bothered by you having a taxi driver to get your characters from A to B, or a bartender to serve them, or a cashier at the bank to tell them they’re overdrawn. Avoid naming these characters, and readers will assume they won’t recur (and thus won’t need keeping track of).

If you do need to stick with lots of characters, it helps to:

This is can be more of a plot issue than a character one, in terms of your writing. If your plot involves your characters being rescued by coincidence, an outside force, or someone who isn’t in your main cast, then your readers will feel frustrated or even cheated.

This is particularly true at the ending of your story. We want characters to earn their happy ending: we don’t want the hero to succeed simply because the (normally competent) villain makes a blindingly stupid mistake.

If your characters are constantly being rescued by other people, or if their successes rely on a change of coincidences, look for ways to let them solve their problems through their own strength or wit.

This problem might be related to the next one, too, if you hate to let your characters struggle.

Further reading: How to correctly use a “Deus-Ex-Machina” and not die trying, Duilio Giordano Faillaci, Medium

Without your characters facing problems … there’s not much of a story. Your main characters, particularly your protagonist, need to go through some difficult, sad, or downright painful events.

Depending on your genre, this could mean a lot of different things. The heroine in a romance might not suffer any physical injuries – but she might well be upset or hurt by a love interest, or might be distressed by a broken-off engagement.

In many genres, there’ll be all sorts of bad things that happen to your characters. They might be hunted by a serial killer (crime), they might be haunted by something strange and inexplicable that’s happening to them (mystery), or they might be running for their life or trying to save the world (adventure).

As a writer, it can be difficult to allow anything bad to happen to your characters. Remember, though, that if your characters effortlessly sail through the story without any sort of upset or harm, readers aren’t going to find it particularly engaging.

Let your characters get hurt, let them be miserable, and especially let them face up to the consequences of their actions.

I hinted at this in the last section: your characters, even the good ones, should have flaws that cause them to do things that complicate the story for them. This can often be a core part of your character’s growth.

If you have an irritable protagonist with a hair-trigger temper, perhaps they snap at their best friend one too many times … and their friend stops speaking to them.

If you have a character who’s a daring adrenalin-seeker, perhaps something goes wrong with their motorcycle stunt – and they get hurt. (Or worse, someone else does.)

Flaws also make your characters more realistic, and they help us empathise with them. Characters who are too perfect are usually two-dimensional (see #1) and they can be annoying or just hard to engage with.

Problem #6: Allowing Characters to Strive for a Goal

Your characters, particularly your protagonist, should have a goal that they’re trying to achieve. This might be something fairly small – and, if something bad has happened right at the start of the novel, it might simply involve returning to the status quo.

Often, your character’s initial goal isn’t the one they’ll end up striving toward during the rest of your novel. Perhaps they’re chasing a promotion at work, or trying to pass an exam, or preparing for a trip abroad. Their goal might be ditched or superseded by the events of the plot (e.g. the exam suddenly seems much less important when the person they love most falls mysteriously ill, and doctors are at a loss to help).

Make sure your character has something that they want to achieve (or to avoid – e.g. getting fired) right from the start of your story. This helps us to root for them – and encourages us to keep reading to see whether they get the thing they want.

Finally, this is a problem that some writers can have – particularly those who don’t tend to create an outline. (Not that I’m knocking that: my first drafts are very exploratory and I pretty much never have a full-blown outline in place.)

Some writers feel that their characters “take over” or “come alive” and send scenes spiralling off in unexpected directions. While that can be a fun way to write – and potentially a great way to come up with new ideas or plot twists – it can also end up with your scenes devolving into a bit of a meandering mess.

If you feel that your characters take over in this way, it’s worth drawing a clear distinction between bits of writing you’re doing that are intended to be exploratory, and bits that are part of the plot. Maybe you have a rough draft of a scene where your protagonist goes off in a direction you really didn’t plan – that doesn’t mean you have to stick with it!

If it becomes clear that your original plan wouldn’t be in keeping with your character’s personality, then you might need to look for ways to nudge them back onto the “right” path. This could mean throwing extra complications into the mix – either to prod them toward further action (if your characters mostly like to sit around, drink tea, and have a nice chat) or to rein them in (if your characters tend to do outlandish things that are hard to come back from).

Getting characters right can be really hard – but also very much worthwhile. I’m sure you can think of characters who’ve stuck with you for years after you read about them – characters who you loved like friends.

For more on creating and writing characters, check out the other pieces so far in our four-week series:

#2: How Much Should You Describe Your Characters? (newsletter)

You might also want to check out my “Advanced Fiction” self-study pack, which has three seminars relating to characters (Heroes & Villains; Handling Viewpoint in Fiction; Seven Ways to Add Depth to Your Characters).

You can find all the details of that, and my other self-study packs, here.