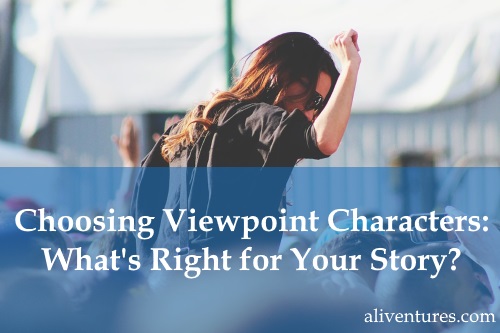 Sometimes, it’s obvious who the POV (point of view) character(s) will be for a particular story. Maybe you’re writing a first-person romance novella, for instance, with the heroine as the only viewpoint character.

Often, though, there isn’t a completely clear-cut choice. You might have multiple characters playing a large-ish role in the story: chances are, your protagonist will be a viewpoint character, but you may well have others too.

When you sit down to write any new story, viewpoint (often called POV, for point of view) is pretty much the first decision you have to make. Who will begin your story? What other voices will you bring in? The decisions you make will shape the whole of your narrative … and they’ll shape the reader’s experience of it.

Choosing a POV Character: One Person … or More?

The advantages to one viewpoint character, whether first or third, are:

If you have multiple POV characters, however:

There’s no “right” answer about how many viewpoint characters to have, but it’s also important to think about how long your story is going to be in total.

If you’re writing a short story, you’ll probably want to stick to one viewpoint character (unless it’s essential for the plot that you have two different perspectives).

In a novella, you might find that two viewpoints work well – maybe in a split narrative – but you won’t want to have lots of different voices coming in.

In a full-length novel, you might have quite a few viewpoint characters: in Lycopolis, for instance, I have seven (and Oblivion has nine). You’ll need to think then about which characters get the main share of viewpoint scenes – some of mine only have a couple of chapters each as their perspectives aren’t so important to the story.

What if Your Story’s POV Isn’t Quite Working?

Sometimes, a story that doesn’t quite come together has a viewpoint issue.

You might feel a tension as you’re drafting: in Write a Novel and Get it Published, Nigel Watts mentions struggling with the draft of his novel Billy Bayswater, only for it to fall into place when he changed the narrative from third person into first person.

Or, you may get through your first draft but then feel – on re-reading – that the story simply isn’t as gripping as you’d hoped, or that one character’s scenes read far better than another’s.

Here are a few things to think about if you’re considering changing what POVs you use:

What POV characters are you using in your current work-in-progress? Are they a good fit for your story, or are you thinking about changing things around? Share your thoughts with us in the comments below.