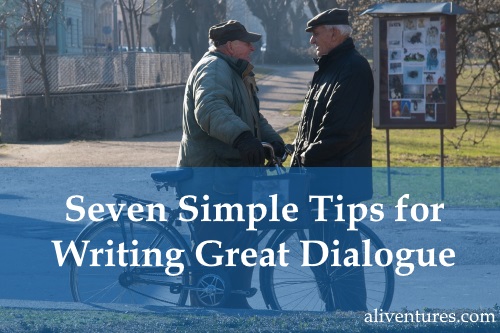 This post was first published in March 2012 and updated in November 2021.

A lot of fiction-writers struggle with dialogue. It’s tough to make fictional people sound convincing. And on an even more basic level, it’s tricky just to punctuate dialogue correctly.

But dialogue is an essential part of your story. It makes your characters seem real; it’s often vital to the plot. It keeps your story fast-paced and easy to read, partly because of the way dialogue breaks up a page of text.

I usually find dialogue much easier to write than action or description. Even so, I’ve picked up plenty of tips over the years – and I’m hoping these will help you too.

#1: Your Dialogue Needs to Sound Real

Your dialogue should be convincing, so your readers can “hear” the conversation that’s taking place. This means:

“You’re in deep poo,” said Peter. “They found out what you did to that kid at school, and now they’re gonna make you do time out in the Belt.”

The dialogue isn’t a true representation of how children speak (especially as Card’s child characters are extraordinarily intelligent) – but it sounds realistic, with the use of contractions like “you’re” and non-standard words like “gonna”, as well as the insults (“moron” and “turd”).

It’s all too easy (and I’ll confess I’ve fallen into this trap) to go a bit too far in trying to make your dialogue realistic.

Yes, if you listen to any real-life transcript of conversation, there’ll be a lot of pauses, “ums”, “you knows”, run-on sentences, and so on. Your job as an author, though, is to give a flavour of real dialogue, not a faithful reproduction.

This, for instance, could be a verbatim reconstruction of a conversation, but it’s going to (a) quickly become annoying to read and (b) make the characters sound slightly moronic, even if they’re not supposed to be.

Save the pauses, “you knows” and “ums” for when you really want to convey hesitancy or uncertainty; don’t use them as part of every conversation.

It’s the speaker’s name (or a pronoun referring to them) plus a speaking verb. This “tags” the dialogue as belonging to a particular character.

When I was a budding writer at primary school, I remember being taught to vary dialogue tags – we had to come up with a list of different words to use instead of “said”. While this is a great exercise for building a child’s vocabulary, it’s a useless one for real writers.

Readers don’t notice the repetition of “he said” or “she said”. We’re so used to reading these that our eyes just skim on over them.

But if you throw in a few unusual dialogue tags, those will stand out. Tags like “snarled” or “expostulated” probably don’t belong in your story, unless you’re writing a humorous piece.

The tags I tend to stick to are:

I’ll occasionally use “whispered” or “yelled” if a line needs to be delivered at a particular volume!

It’s also a good idea to avoid using adverbs and adjectives with your dialogue tags. Often, your character’s tone will be apparent from the words they use; you don’t need to tell the reader “John said angrily” or “Susan asked impatiently”.

#4: … Or Take Dialogue Tags Out Altogether

You definitely need some dialogue tags in your short story or novel, but you don’t need to tag every single line of speech. Here’s another way to assign dialogue to a character:

John looked up from the paper. “I don’t see what all the fuss is about.”

It’s obvious that John’s speaking, because the dialogue comes straight after his action. (The action part is called an “action beat” or a “dialogue beat”.)

You can do it the other way round, too:

“He should have been home by now.” Sarah paced around the room, pausing long enough to glance out of the window at the empty street.

If you have a conversation between two people, you can sometimes get away with just having the lines of dialogue, with no tags at all, for a short space. This works especially well if the characters have quite different speech patterns.

Here’s an extract from Jeeves and the Feudal Spirit by P.G. Wodehouse. The first line is Wooster’s, then the second is Jeeves’.  If you’re at all familiar with the characters, it’s very easy to tell who’s who!

“Under the tiddly-poms of whatever-it-is … How does the rest of it go?”

“Under the bludgeonings of change their heads are … pardon me … bloody but unbowed, sir.”

“The title of the poem is ‘Invictus’. But did I understand Mrs Travers to say that Lord Sidcup was expected, sir?”

…and it goes on with a few more lines before there’s a line of action.

#5: Every Speaker Should Get a New Line

This, for instance, is incorrect:

“Could he be right?” David asked, turning to Rachel. “I don’t know,” she said.

Instead, it should be:

“Could he be right?” David asked, turning to Rachel.

(You could get away without the “she said” here, too, because the new line indicates the change of speaker.)

If a character does something just before they speak, you’ll also want to move their action onto the new line.

“Could he be right?” David asked, turning to Rachel.

If you’re ending dialogue with “she said” or any other tag, then the dialogue sentence should finish with a comma, not a period, and the tag should start with a lower-case letter (unless it begins with a name, obviously).

If the dialogue is followed by action, it should end with a full stop like any other sentence. Compare these:

“I found out all about it,” she said.

“I found out all about it.” She turned away.

In both cases, the punctuation still goes inside the quotation marks.

#7: You Can Break a Line of Dialogue in the Middle

Most of the time, dialogue tags or associated actions go before or after the dialogue. Sometimes, though, you’ll want to position a dialogue tag or action in the middle of the speech.

Here are a couple of examples:

“What the hell?” Tom looked around at the others. “Did any of you know about this?”

Usually, you do this to indicate a pause. It’s also a useful way to get the dialogue tag in near the start, if a character is going to deliver several sentences of dialogue.

If you split up a sentence, then the second part of the dialogue should start with a lower case letter. (At some stage I was taught the exact opposition – that the second part should always start with a capital – but it seems like that’s not how it’s supposed to be done!)

Dialogue is a lot of fun to write, though it can be tough to do well – it’s definitely a good idea to go back and edit your dialogue carefully after writing the first draft.

For more help with dialogue, check out: