Split Narratives: Dividing Your Story Between Two or More Narrators 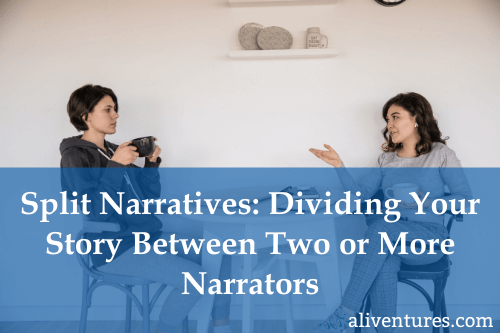 This post was originally published in June 2015 and updated in January 2022.

There are several perfectly good ways to structure a story in terms of viewpoint, but (probably) the more common ones are:

A slightly more unusual choice is to use two (or more) first person narrators. Here are a few examples:

Gentlemen & Players by Joanne Harris – the narrative is divided between two first-person narrators; the identity of one of these is concealed, though hinted at.

The Chaos Walking trilogy by Patrick Ness – a particularly interesting one as the first book has one first-person narrator, the second book has two, and the third book has three.

The Help by Kathryn Stockett – with three first-person narrators, Aibileen, Minny, and Skeeter, all with a different voice.

Gone Girl by Gillian Flynn – with two first-person narrators, their narratives combining to give two sides of the story.

Me Before You by Jojo Moyes – this one is much less of a “split” narrative as it has one main narrator (Lou) and occasional brief chapters from other first-person narrators (Treena, Camilla Traynor, and Nathan) as well as a third-person prologue

Why Structure Your Story This Way?

As a reader, I enjoy strongly-voiced first person narratives, though they can sometimes take a bit of getting into. (If you’re after unusual/strong narrative voices, with a single narrator, try Room, The Observations, or 600 Hours of Edward.)

One key advantage of a dual or triple perspective is that it offers variety and contrast: it can balance out a strange or unhinged narrator with a more conventional one, or it can allow two flawed narratives to complement one another.

It seems to lend itself particularly to novels involving a core mystery, as it allows the author to conceal information without relying solely on the device of an unreliable narrator: Gentlemen & Players does this cleverly.

A split narrative also allows both sides of a story to be told: particularly handy if the author is seeking to explore issues like the lies we tell ourselves (and others), or the ways in which events are inevitably filtered through our experiences, our pasts, our moods. Gone Girl does this by splitting the narrative between Nick and Amy, two partners in a strained marriage.

It’s obviously not going to be the perfect narrative choice for every story, but if you’ve got a novel (or short story) that has two or even three main character rather than a single protagonist, it could well be the best way forward.

Whether you’re splitting the narrative between first-person or third-person narrators, there are a couple of key things you need to do in order to make it work – i.e. to make it a good reading experience, one that couldn’t be easily, or even better, delivered by a different narrative structure.

1. Give the Narrators an Equal Amount of “Screen Time”

While you don’t need to divide the book so that two narrators get precisely 50% of the word count, or three narrators get 33% each, it could be tricky to pull off a book with one first person narrator and occasional interjections from another.

(If you do want that, something involving diaries or letters might work for bringing in the additional voice – or a framing narrative where one narrator only appears at the beginning and end of the novel.)

Generally, with two narrators, it makes sense to alternate back-and-forth between viewpoints – I think other structures, like having half the book from one perspective and half from another, would be very tricky to pull off.

Split narratives don’t work so well when the narrators aren’t in the same place and their storylines aren’t sufficiently impinging on one another. As a reader, I often find myself much more invested in one character’s story than another (maybe it’s more exciting, maybe I just prefer that character) – and the other sections of the narrative drag.

If a split narrative is really going to work, the characters’ lives need to be bound up with one another. They don’t necessarily have to be in the same place or even narrating from the same time point within the story (take a look at the use of Amy’s diary entries in Gone Girl, for instance) for this to work.

For an example where – for me, at least – this wasn’t quite working, see the second book of the Chaos Walking trilogy, The Ask and the Answer, where Todd and Viola are apart for much of the book. They’re both bound up in the same larger-scale action of the plot, but the narratives feel disconnected.

If you’ve got a complex story to tell, with two or more protagonists (or a protagonist matched with a fairly sympathetic antagonist), then a split narrative could work very well. It’s also a good choice for mystery novels, or ones featuring an unreliable narrator – or even two unreliable narrators.

Having two first-person narrators is often useful in narrative terms, letting you share details that one person doesn’t know. But a large part of the enjoyment of two (or more) narrators, for both you and the reader, is giving them distinctively different voices and ways of looking at the world.

One of your narrators might be abrupt and cynical; the other might be cheerful and find the positives in life. Giving your narrators different ways of telling the story makes your book more interesting and engaging. It can also be a great way to show a character who rarely says what they truly think or who’s hiding important parts of themself from the world around them.

Splitting your narrative between two first-person narrators isn’t a choice to take lightly. It’s more complex than having a single first-person narrator and it won’t necessarily work in every genre: most romance, for instance, is told from the female character’s point of view. But for the right book, a split narrative could make your story much more engaging and memorable.

If you’re interested in using this technique, why not try it out in a short story? You won’t be committing so much time as you would for a full novel, plus you’ll get a hands-on insight into what works well (and what might be trickier) with this type of narrative.