Seven Habits of Serious Writers to Help You Go Further 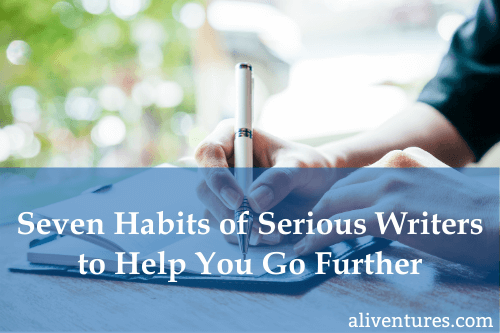 This post was first published in January 2011 and updated in April 2021.

With thanks to Michael Pollock for the article suggestion.

I’ve been writing, on and off, since my early teens – but it wasn’t until 2008 that I truly took my writing seriously.

It made a dramatic difference. By the middle of 2008, I was freelancing for a living. By the end of 2008, I’d embarked on a creative writing degree and started a novel, which became Lycopolis. In 2012, I wrote Publishing E-Books For Dummies, and in the years after that, I juggled starting a family with writing two more novels, a novella, a lot of blog posts, and a whole bunch more.

Over the years, I’ve been lucky enough to work alongside and get to know many great writers. I’ve noticed that serious writers – people who finish novels, who publish ebooks, who have popular blogs, or who run successful freelancing businesses – typically have most of the following seven habits:

To be a serious writer, you have to write.

Yes, that’s obvious. But I’ve met a lot of would-be writers who don’t actually write on a regular basis.

Maybe you’re one of them. You’d love to call yourself a “writer”, but most weeks, you don’t really get anything written. You have plans, sure. You read writing magazines or blogs. Perhaps you feel that you’re not quite ready to write yet – you’re not good enough yet.

Unfortunately, you won’t get any better at writing unless you actually write.

I know it’s tough. I know that it’s really hard to get over that resistance to write – which can seem almost insurmountable at times.

You can do it.

Writing “regularly” is key here. That doesn’t mean you have to write every single day. If you can write every other day – three or four days a week – that’s fine. Even if you can only write once or twice a week, that’s fine. Just don’t let week after week slip by without any writing at all.

Write. Every week. Find small blocks of time to set aside for writing, and use them. (Even 15 minutes is worth doing.) Don’t worry about how good your writing is – just concentrate on getting words down on the page.

Maybe you’ve planned to write for two hours on a Saturday morning. You sit down at the computer. You have a quick glance at the news headlines – and then you check Twitter or Facebook, and follow a link …

Writing is hard work – and you’ll come up with all sorts of distractions to keep you from it. Don’t feel guilty or bad about this: it’s something which every writer experiences, at least some of the time.

Serious writers, though, know how to help themselves focus.

That might mean turning off your internet connection, working in a library, or simply closing the door while you’re writing.

Focusing isn’t just about willpower – it’s also about setting up the right writing environment, and finding ways to remind yourself to stay on task.

When you’re writing, set a timer for fifteen minutes (you can increase this as you get used to it). While the timer’s running, write and do nothing else. No checking emails, making coffee, or scrolling through social media.

If you’re a writer, your job is to take thoughts, emotions and ideas and turn them into words. This isn’t as simple as it sounds – it can be tough to convey something accurately, or poignantly, with nothing but black marks on a page.

By reading, you’ll see how other writers tackle similar problems. You’ll learn what works, and what doesn’t. You’ll know what’s been done before, over and over again, and what hasn’t.

In today’s always-on world, it’s hard to find time to sit and read a book. I find that if I’ve got a book to hand – on the coffee table, at the side of my bed, in my bag – then chances are, I’ll pick it up.

Grab one of those books that you’ve been meaning to read for ages – and start on it. Try to read for at least half-an-hour a day.

Simply reading isn’t going to teach you everything that you need to know as a writer. You could read dozens of novels, but you’d probably still struggle to see how best to put one together yourself. You’re only seeing the finished product – not the process of planning, structuring, drafting and redrafting that led up to it.

There are tons of books, websites and courses that can help you become a better writer. Look for some which tackle your specific area of writing (e.g. writing an ebook) or ones which help with a particular writing problem (e.g. improving your grammar).

Browse through these great writing blogs that focus on improving your craft. Pick a couple of articles to really dig into and learn from.

(And feel free to stick around here at Aliventures, too ;-))

Ernest Hemingway famously said “The first draft of anything is shit.”

Rewriting (also called redrafting) means more than simply checking for typos. After the first draft of a long work, like a novel or ebook, redrafting will often mean cutting, adding and merging whole chapters or sections. Even with a shorter piece, like a blog post, redrafting could well mean making quite major changes.

When you pick up a paperback in a shop, that book has inevitably been through more than one draft by the author, and has had an editor’s attention too. So don’t be disappointed if your first draft doesn’t seem good enough – it’s the same for every single author. You just don’t get to see their first drafts.

Go back to something which you drafted but never rewrote. Look for the potential in it – and reshape the piece to bring out that potential.

Having a professional attitude to your writing means, essentially, taking it seriously. Valuing what you do, and doing it well.

Generally, behaving professionally also means making attempts to get your work published – whether that’s online, on paper, paid or unpaid.

If you’re a freelance writer (even if you work around a day job), professionalism means sticking to agreed deadlines, communicating well with clients, setting high standards for yourself – and meeting them.

Even if you’re not yet making any money from your writing, it still pays to behave professionally. Other writers – and associated gatekeepers, like agents and editors – will take you much more seriously.

Look for places to submit your work – perhaps guest posts to blogs, or short stories to competitions. Follow the guidelines carefully, and remember that agents/editors are typically swamped with unsolicited manuscripts.

That means putting serious thought into your work-in-progress, particularly when it comes to the redrafting stage. It means being a bit introspective about your writing process – for instance, figuring out your best time of day for writing.

Reflection is about taking a step back, so that you can see more clearly. You might journal about a particular project, recording any problems that come up, and writing about how you solved them – this is useful if a similar problem crops up again in your next piece.

You’ll also want to think about your writing career as a whole. What have you accomplished so far? What could you build on? What are your goals? Where are you hoping to get to? You don’t need to look at these questions every day, of course – just stop and take stock once a month or so.

Where would you like to take your writing over the next year? How can you make sure you’re on track for that?

Bonus: Get REALLY Serious with “Time to Write” 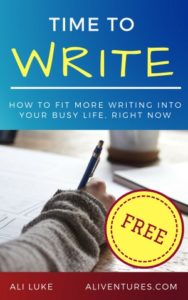 If you’re going to be a writer, you need to make time to write … which is one of the biggest challenges that most of us face.

When you join the Aliventures newsletter, you’ll get my free mini-ebook Time to Write: How to Fit More Writing into Your Busy Life, Right Now. You’ll also get new blog posts straight to your inbox (every Monday) plus exclusive short articles about writing (every Thursday).