Are Your Writing Dreams Unrealistic? 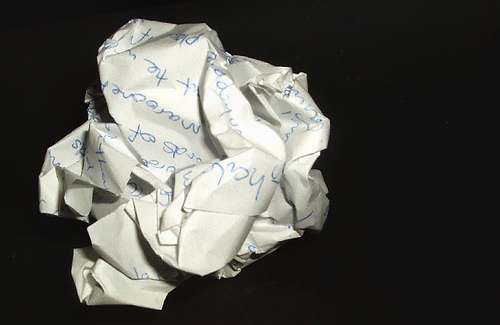 I enjoyed your blog post on making money from your writing. I’d love to make a living writing but I don’t know if that’s unrealistic.

I make a living writing, and I know lots of other (pretty normal!) people who do too.

I’ve written to dozens of writers, telling them all about my background and my writing ambitions. I want someone to mentor and help me get my book, How to Avoid Papercuts, published and sell a million copies.

(They usually go on a fair bit longer than that.)

The truth? It’s an unrealistic ambition. First-time books by unknown authors (especially on topics that interest the author and pretty much no-one else) just aren’t going to become bestsellers.

And, nice as it might be to imagine a top writer spotting how talented you are and helping you out … every writer I know is busy enough with their own projects and their own life.

It’s Nice to Daydream, But…

This dream of being “spotted” by someone in the industry – whether it’s a well-known writer, an agent, or a publisher – is understandably popular.

Maybe you hope that if you send your manuscript to the right person, they’ll love it and do everything in their power to help you.

Maybe you hope that someone super-influential will stumble across your blog, share it with their 100,000 Twitter followers, and give you the big break you’ve been waiting for.

But … there are an awful lot of other aspiring novelists and bloggers out there who’d love the same thing.

And while you are talented, they are too.

This is good news. (Really!)

Your success is in your hands. You don’t need to wait for months – years, decades – in the hope that someone will stumble across you and love your work.

You can get out there and start on the path to your dreams right now. You’ll get a huge head-start on all those other hopeful, would-be writers … because you’re actually doing something, rather than sitting and waiting for success to appear.

Getting a Clear Idea of Your Talents

Now, obviously, to achieve pretty much any writing goal (whether it’s “sell 2,000 copies of my book” or “become a full-time freelance writer”), you need to be good at writing.

Now, you may not be quite there yet – and that’s fine. Whatever stage you’re at, there’s always room for improvement.

And every writer you know started out in exactly the same place. They weren’t born able to write. Gradually, over many years, they got to where they are today. (One excellent illustration of this is Charlie Gilkey’s post Becoming Yourself and Growing Your Blog, where he looks at how several popular bloggers’ styles changed as they found their voice.)

Many writers worry, quite unnecessarily, that they aren’t good enough.

I’m confident (because it’s held true for so many of the writers I’ve worked with) that you are a better writer than you think.

Here are some simple ways to know if your writing is good enough for your dreams to be realistic:

If you can say yes to any of those, you’re good enough!

And even if none of those are true right now, there’s every chance you could make one or more of them happen in the next six months.

Run your own writing dreams past these and see whether they look more like the “realistic” or “unrealistic” options.

(Often, the only real difference is giving yourself more time for a goal, or being willing to take on some extra activities like marketing.)

Keep in mind that “realistic” doesn’t mean easy. All of these would require plenty of hard work, and willingness to learn.

I believe this is a realistic option for almost every writer – and if you want some help in knowing what to do first, check out Seven Crucial First Steps For Your Writing Career here.

Plenty of other people just like you are already writing full-time. They’re no smarter than you. But they took the first steps toward becoming a professional writer … and carried on from there.

Unrealistic: Making a Living Writing About That Obscure ’70s TV Show You Love

This one’s not impossible. If you can build a popular blog (hey, there are bound to be other fans out there in the world), you may well be able to monetize it through ads or affiliate product sales.

But you’ll have a much easier time making a living writing if you focus on topics that plenty of people want to read about, or that companies want to pay you to write about.

Realistic: Becoming a Full-Time Novelist in the Next Five Years

With the ease of self-publishing today, novelists have an unprecedented amount of control over their careers.

Getting good at writing fiction takes time (and you may want to take a course, join a workshop group, and hire an editor), but if you give yourself five years and write for half an hour a day, you could easily produce three full-length novels.

Unrealistic: Becoming a Full-Time Novelist in the Next Five Months, When You’ve Not Yet Started Your Novel

Even if you write at NaNoWriMo speeds, you’re going to need time for editing, publishing and promotion … and authors are almost never able to make enough money from their first novel to actually live on.

It may well take you three novels, five novels, or more to get to the point where your sales can support you full time.

Building a blog isn’t rocket science. If you write great, interesting posts, and promote them through guest posting on similar blogs regularly, you will grow your blog. (Easier said than done, I know!)

Unrealistic: Building a Popular Blog with 30,000 Subscribers with an “If I Write It, They Will Come” Approach

Ever since I started blogging in 2008, there’s been a myth in the blogging world that all that matters is writing great content. The theory is that if your posts are good enough, readers will share them, link to them, and you’ll get tons of traffic and subscribers.

The truth is that – particularly in the early stages – you need to promote your blog yourself. That means networking with other bloggers and supporting one another, guest posting on other blogs, being interviewed on podcasts, and so on.

But do you really want to hold out the hope of being one in a million … or would you rather take things step by step until you reach your goals?

Personally, I’d rather be realistic. I’d rather work hard, take ownership of my dreams, and stand or fall by my efforts.

I don’t want to be that writer who, twenty years down the line, is still waiting for success to just happen.

How about you? What’s your writing dream? Does it feel realistic, unrealistic, or somewhere in between? Share it with us in the comments below.