Are You Too Old (or Too Young) to Become a Writer? 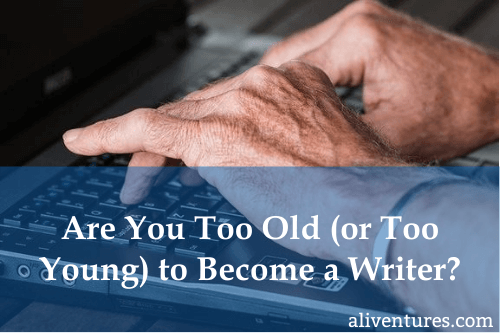 This post was originally published in March 2016, and updated in August 2020.

An email from an Aliventures reader landed in my inbox with the subject line, “Am I too old to become a writer?”

Here’s part of my reply to her:

Plenty of people wait till they’re retired — heck, I’m sure to a lot of just-getting-started writers, you’re young. Hurrah for you getting on with the novel now!

But whatever her age, my answer would’ve been the same: you’re not too old. Keep writing.

Because you’re never too old to become a writer.

Getting Started Young Does Help, But …

Obviously, if you start writing seriously and regularly when you’re still in your teens, you’ll have plenty of years of practice – and thousands, perhaps even millions of words, under your belt by the time you’re 37.

And that does give you a bit of an advantage.

We do sometimes hear about authors who get a very early start on success – I’m thinking people like Zadie Smith and Helen Oyeyemi – but the reason they make headlines is because they’re the exception.

Most writers wanted to write for a long time before they ever took that calling seriously.

And most writers who get started a little later have a ton of other advantages. They’ve got a lot more experience of life – and more to write about. They may have gained other skills (like marketing, or public speaking) that will help them get their writing career off to a quick start.

Trust me, I have spent my share of time regretting things I didn’t do (like: getting on with my writing) in the past.

I’m not suggesting you should try to forget what didn’t go so well for you. Instead, learn from it.

Focus forward: what’s going to change? Ten years from now, you could have a half-dozen finished books under your belt. How will you make that happen?

The time will pass – whether or not you use it well.

Whatever life looks like right now, find a way to carve out some time to write. Start that novel. Because you don’t want to look back, ten or twenty or thirty years from now, and wish you’d done things differently.

If You Really Do Feel Old: Ageism and Writing

As an older writer, you might might worry that agents or publishers or readers simply won’t be interested. You might be reluctant to join a writing course that you suspect will be full of bright young 20-somethings.

The reality will – hopefully! – be different. However, it’s hard to deny that we live in an ageist society – particularly for women.

I don’t know what it’s like to feel invisible because of your age, or to feel that people are dismissive of your writing because they think of you as some little old dear.

I don’t know what it’s like to put your writing aside for 20 or 30 years to raise a family or to work a job that’s not your calling – only to finally have the opportunity when you retire.

I would encourage you, though, not to give in or give up. Try out that writing course (the courses and groups I’ve attended have always had a healthy proportion of older writers). Put your work out there.

If You’re Much Younger: Getting a Head Start

Of course, some writers get serious very early on. I started writing a novel when I was 13.

The big danger here is feeling like you’ve got your whole life ahead of you. Well, you do … but it’s very easy for those years to slip by, while you’re waiting to feel “ready” to become a writer. If you’re living with your parents and siblings, or with roommates, it can also be difficult to get people to respect your writing time.

Your conditions might never be absolutely ideal to write. You’re never going to feel ready.

You’re never going to know everything you think you should know.

You’re never going to have read all the books you think you should have read.

The very best way to grow as a writer is to write: steadily and consistently, for years, while life goes on. The sooner you start your apprenticeship, the sooner you’ll be able to see your work out there in the world.

Of course, there are advantages to waiting. If I’d begun at 18 instead of 13, I’d have no doubt written a considerably better first novel. I’d have known more.

The novel I wrote in my teens was – looking back – nowhere near a publishable standard. But I had plenty of fun and learnt a lot along the way.

Ultimately … you will never be too old, or too young, to be a writer. Don’t let other people’s expectations and biases – however heavy those may feel – hold you back.