How to Start Writing a Novel: Get Inspired and Get Going 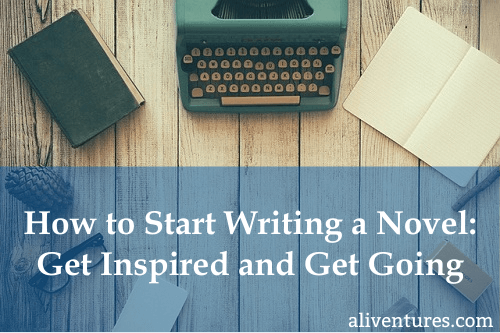 This post was originally published in April 2016 and updated in July 2020.

You’d like to write a novel … but how do you even begin?

I’m not thinking here about ways to write a great opening (if that’s what you’re after, check out this excellent article from The Write Practice).

Because before you can write the first page of your novel, you need to face some big questions like:

I imagine that if you spoke to a dozen different novelists, you’d find their novels had a dozen very different starting points. You’d probably find that some of those seemed unpromising or simply odd.

Chances are, though, you’d also find some common ground between those starting points. Here are some potential ways in which the inspiration for a novel might arrive:

#1: With an image. C.S. Lewis’ famously said that The Chronicles of Narnia “all began with a picture of a Faun carrying an umbrella and parcels in a snowy wood.” Perhaps you have a particular scene, or part of a scene in your head. Like Lewis, you might have carried that image with you for years, even decades.

#3: From a prompt. My very first novel attempt, when I was 14, started in response to a competition entry … and kept going. If you’re coming fairly new to creative writing, try spending a few weeks playing around with prompts and trying out some freewriting – you might find that a particular idea catches hold.

#4: With a concept. My novel Lycopolis began with one clear concept: “a group of online roleplayers summon an evil demon into their game … and into the world”. A ton of things changed from planning to drafting to second draft, but that core idea is still central to the novel.

#5: With a character. Some authors come up with a compelling character then develop a story around them. If you enjoy character-driven fiction, this could be a good way to make it work. Most often, though, you’ll probably find that a character comes to you along with a concept or an image.

#6: From other art. Here, I’m using “art” to include literature, music, etc, not just what you’d find in an art gallery. Perhaps something you’re reading inspires you – it could be a particular character, a plot point, or even a single line of dialogue. Maybe the lyrics in a piece of music speak to you, or there’s a photograph or painting that you keep returning to. A novel could grow from that seed.

(If you want to read several authors’ descriptions of where their novels began, check out What Inspires Authors to Write Their Novels? from the Huffington Post.)

What if You Still Don’t Have an Idea?

You can’t force an idea to emerge. If you don’t feel that any particular idea is calling to you right now, you might choose to spend a bit of time on short stories, poems, or other short-form writing.

However, while you can’t force an idea, you can certainly try to make it easier for one to come to you.

That might mean setting aside some time to (hopefully) be inspired. That could mean going away for a weekend’s retreat, or simply finding a quiet nook in your house where you can curl up with a notebook and a mug of tea and spend a couple of hours playing around with any fledgling ideas that are lurking in your head.

Once you do have an idea, you’ll need to decide whether or not it’s one you want to stay with for quite some time to come…

Can You Stick With This Story Idea for Two Years?

I’ve written a bunch of short stories that I didn’t particularly care about – they were just competition entries, designed to fit a particular theme. That can be perfectly good practice … but with a novel, you need an idea that interests you enough that you can commit to it for a significant length of time.

Realistically, if (like most writers) you have a day job, kids, and/or other commitments, you’re looking at spending a good two years of your life on this one novel.

How do you know upfront if this is the novel for you? I’m not sure you can ever be certain, but I definitely advise going with your gut feeling here.

If you’re dithering, ask yourself “Is this exactly the kind of book I’d love to read?” If so, you’re probably onto something good!

So, you’ve got an initial idea – now it’s time to develop it into an embryonic story, by developing characters and a rough idea of what’s going to happen.

At this stage, I’d suggest you lay in some supplies:

When you work on paper, it’s easier to stay away from distractions. You may well feel freer to put down possibilities instead of fixed ideas – whereas typing into a linear document can feel rather formal.

Try coming up with your characters on a single sheet of paper – I like to draw these as a sort of mindmap, with lines linking them (where appropriate) and very brief notes about each one.

Another sheet of paper can be a good starting point for the events of your story and how they link together: the plot of your novel. What’s going to happen to your characters? Do you have a sense of how it all ends?

You can spend as long as you want on this. There’s definitely no “right” way to do it: some authors like to plan out lots of details before they write a single word, others have the barest idea of where they’re going, and a couple of characters to enjoy the journey with.

A Quick Note on Novel  Structure

I don’t worry overly about structure and “plot points” until after the first draft of a novel.

Structure is at least partially instinctive – we’ve all read and watched plenty of stories, and you may well find that a good structure naturally emerges as you write and rewrite.

If you do want to have a clearer structure from the start, or if you’ve got a first draft that needs working into shape a bit, K.M. Weiland’s book Structuring Your Novel is excellent. There’s also a workbook version.

For a very basic version of novel structure, I like Nigel Watts’ “Eight-Point Arc” – you can find a post I wrote about it here on Daily Writing Tips (so long ago that eagle-eyed readers will notice I was still writing under my maiden name).

Taking the Plunge: Getting Your Novel Underway

Ultimately, writing a novel is a messy business – one that’s at least partially conducted at a subconscious level.

You’ll probably find that ideas come to you at odd moments, sticky problems finally work themselves out after weeks of wanting to bang your head on your desk, and your first draft ends up containing squeamishly bad passages of writing alongside gripping scenes that really come alive.

There’s definitely no perfect way to begin: what matters is that, once you’ve got an idea you’re excited about, you do begin. I know it can be hard to take that plunge, though!

Here are two simple things you can do to make it easier:

Get your calendar and pick a date to start writing – it could be today, it could be three months from now. Try not to make it any longer than that.

Three months should be enough to get your characters and plot pinned down (see above) and to arrange life so you’ve got some regular writing time.

And yes, you’re busy – but realistically, are you going to be less busy any time soon? You may need to make time rather than waiting to find it.

Yes, first lines are important, and making your very first mark on a blank page can feel momentous – and daunting. But chances are, you’ll rewrite your opening a few times (I went through about sixteen drafts of the opening to Lycopolis) and your first attempt doesn’t need to even approach “perfect”.

When your designated day rolls round, just begin.

You almost certainly won’t feel ready. Trust me, no-one does! If you wait until the “right” moment … you’ll be waiting a very long time.

Write. Breathe life into your characters. Set the wheels of your plot spinning faster and faster. Watch the words flow onto the page.

And if you falter during the early days or weeks of writing – if it seems like you have a very long way to go – then remind yourself that you’re going after your dream, and that step by step, word by word, you will reach it if you just keep moving forward.