Getting Apostrophes Right: From the Easy to the Tricky Cases 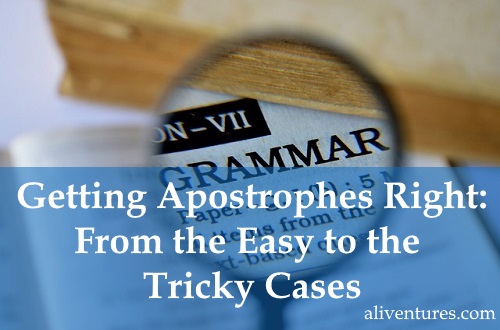 This post was first published in November 2016 and updated in January 2022.

I think it’s a safe bet that you’ve come across the apostrophe before. (If not … there are two in the previous sentence.)

But even experienced writers can struggle with this punctuation mark. And that can really damage your credibility. If you’re a freelancer, making mistakes with apostrophes looks sloppy (and might make clients worry that you’re making other mistakes that they haven’t noticed). If you’re submitting work to literary agents or publishing it yourself, misusing apostrophes makes your writing look unpolished, at best.

The good news is, it’s really not too tricky to get apostrophes right.

In this article, I’m not only going to explain the basics of apostrophes, I’m also going to run through the tricky cases that often trip writers up.

The Two Basic Uses of Apostrophes

In English, apostrophes are used for two primary reasons:

They are never used to indicate a plural.

That’s so important that I’m going to say it again: apostrophes are NEVER used for plurals.

Example: This is Sarah’s piece of cake.

Here, the “apostrophe-S” added to “Sarah” creates the possessive.

Most people find this type of apostrophe pretty straightforward to use. (We’ll come onto some trickier cases later, though.)

Example: That isn’t your cake.

Here, “isn’t” is a contraction of the words “is not”. The apostrophe is positioned where the missing letter (“o”) would be.

In English, most plurals are formed by adding -s to the end of a word.

You do NOT use an apostrophe in plurals. This is such a common mistake, and crops up quite often on shop signs and restaurant menus.

I can see why this happens, because adding s for a plural is dangerously similar to adding ‘s for a possessive. If you find yourself making this mistake, always proofread carefully and double-check all your apostrophes.

Where Apostrophes Get Tricky

There are a few cases where apostrophes can be particularly confusing.

Sarah’s cake is easy … but what if the cake belongs to Chris?

There’s no firm rule on this, and different editors will do things slightly differently.

If you want to stick to the most common conventions, you should do the same as you do with any name – add an apostrophe and an S:

Some people prefer to write it as Chris’, which might be considered less formally correct, but isn’t likely to bother most readers.

For Biblical and classical names, it’s conventional to leave off the final S:

Again, though, if you add a final S to these, it’s unlikely to bother your readers.

How about if the cake belongs to a group of teachers?

The convention here is to add the apostrophe but omit the additional S:

Note that plural nouns that don’t end in an S are treated in the normal way:

Possessive Pronouns: His, Her, Your, Its

When these become possessive, they do not gain an apostrophe:

Some companies drop the apostrophe from their name to make it more streamlined: there’s a whole post about this practice here.

In this case, use whatever the company uses as their official name on their logo, shops, brochures, website, etc even if it’s not grammatically correct. E.g. write “Waterstones” not “Waterstone’s”.

Most contractions are pretty straightforward, e.g.:

A few are a tiny bit more complicated, though. The main ones to watch out for are words with multiple missing letters in different places: they still only have one apostrophe:

All the above used to be spelt with multiple apostrophes, and you may see them written that way in old (think 19th century) novels.

The only word I can think of that still gets spelt with more than one apostrophe is “fo’c’sle” or sometimes even “fo’c’s’le” . This is a contraction of “forecastle” – the front part of a sailing ship.

When writing about decades, some people use an apostrophe like this:

This is generally considered incorrect, or at the very least confusing! Plurals never normally take an apostrophe, and “1960s” is just as clear – and recommended by most style guides.

If you’re abbreviating a decade, it’s correct to use an apostrophe for the missing digits:

Apostrophes can be tricky, even for experienced writers. If you get stuck, just check the list above. If you’re working with an editor, it’s a good idea to check their preferences (e.g. on issues like Chris’ vs Chris’s), too.