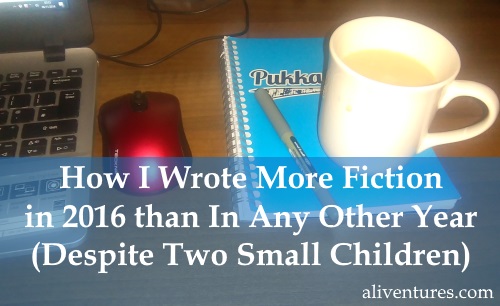 I finished two full drafts of my novel, the third Lycopolis book, by mid-November 2016 … the most fiction I’ve ever written in a year.

This is despite 2016 being a pretty hectic year, with two small children, limited work hours, and fiction-writing being squeezed into a 30 minute slot most days.

In past years, I often binge-wrote: I’d spend a few days focused on my novel, only to stop when life got busy … and I wouldn’t go back to it for weeks or months.

In 2016, fiction was a much more consistent priority for me. It was rare that I had a whole day to write (I did a day retreat in March and an overnight hotel stay in November to focus on my novel) … but I wrote most weekdays all year.

I found this helped me keep up the momentum: in the past, when I’ve had long breaks from writing, it’s been hard to get back into the story and pick up where I left off.

I know I’m not the first parent to notice this: once you have kids, you are forced to get better at getting things done, because there’s simply so much to do! As Hannah Booth puts it in her Guardian article How to write a novel this year:

Unfilled hours are notably scarce, which lends them a preciousness. As a result, I am profoundly productive: in a single, rare hour to myself, I can shower, run to the supermarket, make two phone calls, pay a bill online and cook lunch. This has spurred me into action: after years of procrastination, I want to start writing.

My Writing Time was Scheduled In

This is, I think, what made the biggest difference. I set my writing time as 5.15pm – 5.45pm (this fits neatly between the kids teatime and running their bath!) – a time of day when my husband was almost always home from his PhD office and ready to take over looking after the kids.

Having this time set aside for writing meant that despite being busy, I wrote. If I’d instead told myself that “I’ll write when I have time,” I’d probably have written all of ten words this year. 😉

Since making scheduled writing sessions a regular part of my week, I’ve found that Mark McGuiness, author of Productivity for Creative People and Cal Newport, author of Deep Work both highly recommend it.

My Writing Sessions were Short

This might sound rather counter-intuitive: surely I’d have written more if I’d had longer writing sessions?

In the past, I always thought I needed several hours at a stretch to write – or at least a full hour. I’d tried writing in short daily blocks and it made me feel frustrated: I preferred having two or three long weekly sessions.

Over the past few years, though, I’ve got the hang of writing in short sessions. It’s much easier to focus when you know you only have 30 minutes … and while it can be frustrating to stop after only making a bit of progress through a scene, it’s rewarding to watch the novel progress quickly over the course of a few weeks.

Writing Became Something to Look Forward To

My writing time became a treat: something to look forward to at the end of the day. It was a much-needed bit of time alone with my own thoughts – with something to show for my work other than a (temporarily) clean floor or clean child!

My Laptop Wasn’t Connected to the Internet (Mostly)

I wrote at the top of our house, where my rather feeble laptop can’t connect to the wifi. Perhaps unsurprisingly, I found my writing sessions were far more focused and productive when I didn’t plug my laptop into the ethernet cable, but instead left it entirely internet-free!

If you’re determined to write more fiction in 2017 than in 2016 … or more fiction than you ever have before! … then try some of these:

Take your writing seriously. Don’t see it as something trivial that can be shunted aside for more “important” things. And don’t tell yourself it’s something that you can only indulge in once all your “proper” work / chores are done.

Schedule your writing time. If you can, put this in between two other commitments in your day, so you’ve got a natural start and end point. For instance, you might choose to write between taking a shower and going out to work, or during your lunch break, or as soon as you get home from work and before cooking dinner.

Improve your writing environment. For me, that usually means writing in a full-screen mode to avoid distractions, and switching off the internet altogether! You might also try getting out to a local library or coffee shop, if family / household demands tend to distract you at home.

If you want to write a novel around the demands of a busy life, check out Your Two-Year Plan for Writing, Editing and Publishing Your Novel: there’s a quick-start version plus a detailed blog post there, and you can even download an in-depth .pdf if you want further help. You only need 3 – 4 hours per week (around 30 minutes per day, or 15 minutes every morning and evening) to create a finished, polished novel in two years.

Pop a comment below to tell me what YOU will do in 2017 to write more than ever before (or what you’ll do to keep up your output, if you’re already writing a lot) – I’d love to hear about your plans.

And … if you’ve got kids of any age (or care for kids, are planning kids, etc…) then check out my Parent-Writers Support Group on Facebook. It’s totally free, and a great place to get help, encouragement and practical tips from other people who’re facing the same challenges as you. It’s a closed group (so we can chat privately), which means you may need to wait for a few hours for me to approve your membership.