Is Your Writing Art – and Should it Be? 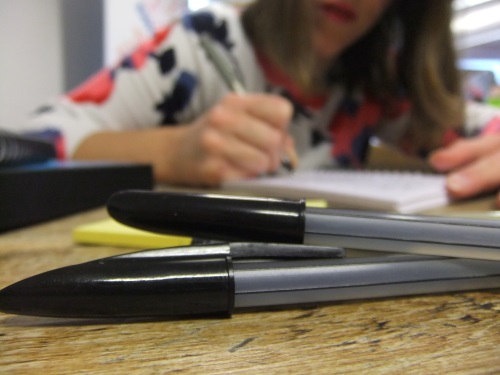 Welcome to the revamped Aliventures! If you’re reading this by email or RSS, you might want to pop over to the site (aliventures.com) to see how it looks.

I’ve got a new tagline for the site, up there in the banner (along with the rather huge picture of me): Master the art, craft and business of writing. I think the “craft” and “business” aspects are easy to grasp, but perhaps like me, you wonder whether your writing really counts as “art”.

Where Do We Draw the “Art/Not-Art” Line?

There are certain types of writing that you’re probably comfortable thinking of as “art”:

And there are types of writing that are pretty far removed from art:

But somewhere in between those, there’s a massive grey area.

Books like The Da Vinci Code and Fifty Shades of Grey … that’s a bit tougher.

Is it About the Money?

Some people feel that once you start writing for money, rather than for love, that’s when you stop producing art.

I really don’t think that’s true. After all, fanfiction is written with no (legal) possibility of monetary reward … and yet I don’t think most of us would consider it more worthy art than, say, a Booker prize-winning novel.

(That’s not to knock fanfiction, by the way; plenty of it is really well written and more enjoyable to read than some Booker prize-winning novels.)

Most authors write “for the money”. That doesn’t mean that the money is their sole motivation, or that their work is just hackery. Shakespeare (with wealthy patrons) and Dickens (paid per instalment) wrote for money.

There’s a rather aggravating idea in some literary circles that writing for money, particularly daring to hope to make a decent living, means that the writing is somehow lesser:

Right now there is a distressed writer sitting in front of her computer somewhere, worrying not about whether she’ll make enough money to give up the day job or how many copies she will sell, but obsessing over form and language, meaning and truth. Exactly what, in the long term, readers will always be hungry for.

Whatever happened to writing for love, not money?, Sameer Rahim, The Telegraph

Perhaps Sameer is blessed with the ability to only focus on one category of things at a time, but personally, I’m quite capable of worrying about how many copies my books will sell while also wanting to make them as good as they can possibly be. I imagine Dickens felt the same.

If you want or need to write for the money, there is absolutely nothing wrong with that – and it in no way takes away from the art of your writing.

After all, writing “for the money” basically means writing for an audience who care enough to pay for your work. Doesn’t that imply not just a certain level of quality in “form and language” but also an ability to touch readers with “meaning and truth”?

Is ALL Writing Art?

We can’t just say that all writing is art (unless you want to include shopping lists and automated emails and spammy web pages) … and I don’t think we can even say that all fiction is art, though that’s closer.

I think motivations start to come into play here: art isn’t just about the finished product but also about the person who created it.

If I wrote erotica, I’d probably buy a “how to” book and set about it like a paint-by-numbers activity – in much the same way I wrote plenty of technically decent but emotionally barren short stories around the start of my creative writing Masters degree.

But perhaps if you wrote erotica, it would be something truly from your heart, not something coldly calculated to make money. It would be a book that readers loved, rather than one they bought, read, and discarded.

I think it’s very much about the intention of the author and – inextricably bound up with that – the experience of the reader.

Putting Your Heart into Your Writing

Those emotionally barren short stories I wrote years ago worked on a craft level, with decent narrative and dialogue and characterisation … but they didn’t resonate with the reader. I wrote them as relatively cold-blooded exercises, with the hope of getting a few small competition wins. (I managed a couple of prizes.)

Two separate tutors, both with quite different teaching styles, told me I needed to put my heart, not just my head, into my writing and I finally listened.

For me, that meant writing the novel I’d been thinking about for years – Lycopolis.

For you, putting your heart into your writing that might mean working on poetry or a memoir or an epic fantasy trilogy or a blog or whatever it is that you’d love to write.

You can’t expect it to matter to a reader if it doesn’t matter to you.

But if it does matter to you – if you love what you’re writing (at least some of the time), if you keep getting drawn back in, if you want to get it right, if you can’t just stop and walk away and never pick it up again … then that’s when you’re producing art.

The Dangers of Art

Of course, “art” isn’t necessarily better than “not-art”. Putting your heart into your writing leaves you open to some potentially major problems:

#1: Not Being Able to Detach Yourself from Your Work

If you want to get your work in front of readers, you need to clearly distinguish you from your writing.

While it’s perfectly normal to feel a bit down when your work gets negative feedback or a rejection, you have to avoid seeing it as a personal attack. However much it might feel like it, people aren’t criticising you – they’re giving you feedback on the craft of your work.

#2: Thinking That Art is Enough

You can pour a whole lot of passion and enthusiasm into a piece of work without it necessarily being worth reading.

I’ve seen a few writers over the years feel that art should be enough. They dash out a first draft, and think they’re finished. When they’re workshopped, they fiercely defend every word, refusing to listen to suggestions.

Most writers, of course, know that craft is just as important: that the first raw rush of words, while often great fun to write, will require careful reworking and editing.

#3: Treating Every Writing Project as Art

Not everything you write needs to be a work of art. You don’t have to pour your heart and soul into work-for-hire … especially if doing so leaves you drained and unable to work on the writing projects you truly love.

I don’t do as much freelancing these days as I used to, but I still do a bit. It’s a nice break from other writing projects, because I’m not invested in the same way, and I’m not trying to produce art – just decent work for a decent wage.

This also applies to emails, forum posts, tweets, and other more ephemeral forms of writing: they don’t have to be masterpieces worthy of a place in your bibliography some day.

You’re perfectly entitled to see yourself as an artist and your writing as art without having to apply that to everything you write.

If you want your writing to be art, write what you love. Write wholeheartedly. Write because you can’t imagine not writing.

I’d love to hear about your current writing projects, whether you consider them art or not: drop a comment below and tell me what you’re working on.