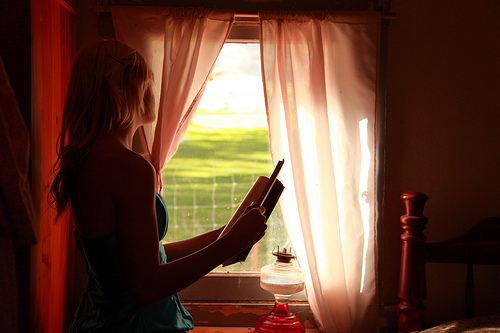 One of the most common pieces of advice given out by writing teachers is show, don’t tell.

It’s a neat little phrase. But you might wonder what exactly it means, and why it matters. After all, you’re telling a story … is that so bad?

I’m going to take you through a few examples of telling versus showing in writing, and also look at some instances where appropriate to tell instead of showing.

Let’s get started with the main problem with telling:

Telling is Usually Too Abstract

When you tell the reader something, it can come across as rather flat. You’re giving them information – and that often stops the story in its tracks.

Here are some examples of telling:

#1: John was always impatient with his children.

#2: The house was run-down and dirty.

Does the reader care that John is impatient with his children? Do they really get a picture of the house? Do they empathise with Tina?

Probably not. So what can we do differently in the writing?

#1: John grabbed the doll that was lying on the sofa and thrust it into his daughter’s hands. “Can’t you ever pick up your toys?”

#2: The flowers in the front garden were long dead, and paint was flaking from the window-frames. As Sarah pushed open the front door, a musty smell hit her. There were patches of damp mould creeping up the walls. She almost slammed the door shut again in disgust.

#3: Work was deathly dull, so Tina browsed Facebook; it didn’t make her feel any better. One friend from school had just been promoted to managing director; another had got engaged. All she had, five years out of college, was a cat, a tiny rented apartment, and twenty thousand dollars of debt.

None of these are necessarily great prose … but I hope they’re a bit more engaging than the “telling” versions.

How to Show not Tell

When I come across something in my work that I’m tempted to simply tell, I ask myself how I can “make a scene of it” and whether that would be more effective.

Making a scene of it means:

Sometimes, your choice of narrator means that you need to show things and trust the reader to understand. Emma Donoghue’s Room is told from the perspective of a five-year-old boy. It starts with:

Today I’m five. I was four last night going to sleep in Wardrobe, but when I wake up in Bed in the dark I’m changed to five, abracadabra.

We’re not told where exactly he and his mother are, and why, but details slowly come out. Even from this first sentence, the reader’s going to have questions; why is the boy sleeping in the wardrobe and waking up in the bed? Why are Wardrobe and Bed (and, reading on, the rest of the items in the room) all capitalised? As the reader continues, it becomes clear that there’s something very wrong with the situation – even though the narrator treats everything as though it’s completely normal.

Don’t force yourself to avoid telling at all costs – it’s a natural part of fiction. It’s fine to tell us “Thomas was overweight and balding” rather than spending a couple of paragraphs describing Thomas huffing his way up the stairs or standing in front of the mirror touching his bald spot – especially if Thomas is a minor character. The key is to avoid letting telling become a short-hand that stops you from developing major characters and situations.

Here’s an example from the first page of Rivers of London by Ben Aaronovitch:

The responding officers reported back to control, who alerted the area Murder Investigation Team whose duty officer, the most junior detective constable on the team, arrived half an hour later: he took one look at Mr Headless and woke his governor.

We don’t need to know who the officers are: it’s not important to the story. The “telling” mode is an appropriate one here – it gets the information across fast and keeps us moving. There’s also a hint of the first-person narrator’s voice (“governor” is slang for “boss” in this case – you’ll often hear it on British cop dramas).

If it’s essential that the reader has some specific piece of knowledge, it may well be best to simply state it in the narrative, rather than trying to make it into a scene. (Even better, try to dispense with it altogether: yes, you may have spent hours researching the intimate workings of black holes, but does the reader really need to know more than “if you go past the event horizon, you’re not coming back”?)

Sometimes, you might deliberately adopt a writing style that includes a lot of telling, and that’s fine. You may be using an omniscient narrator (rather than writing from a particular character’s perspective) or you might be using telling for comedic effect. You don’t always need to avoid telling: just be aware of the choices you’re making, and why.

If you’re concerned that your fiction involves too much telling and not enough showing, look for a specific instance of telling – and try to turn it into a scene. If you get stuck, just pop a comment below, and let us know what you’re struggling with.

To make sure you never miss out on a post, click here to get the RSS feed for Aliventures, or pop your email address in the box below to receive posts straight to your inbox. I usually write a new post once or twice a week.