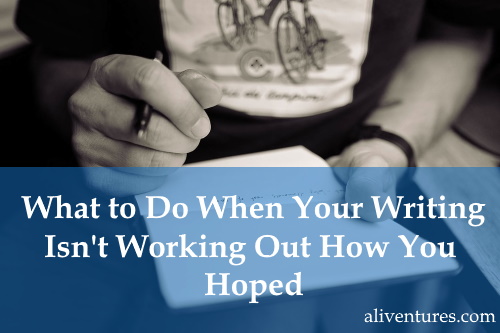 Are you getting as much writing done as you’d like?

Are you seeing the success you want?

For most writers, the answer is “no” … and that’s perfectly normal.

Maybe, for instance, you thought that quitting your day job to freelance would give you plenty of time to work on your fiction-writing … but paying work has got in the way. (I hear this a lot from fellow freelance writers and editors, and I’ve definitely experienced it myself.)

Or maybe you had high hopes for your writing … but those hopes haven’t yet come to fruition. Perhaps your book didn’t find a publisher, or you self-published it, but found it really hard to sell any copies.

Something else that happens – for almost all writers at some stage in their career – is that life gets in the way. Perhaps you’ve had kids (which the attendant dramatic drop in free time!) or perhaps you’re caring for an elderly or disabled relative. You might be grieving a loss, coping with a major house move, or going through some other major life event.

When your writing isn’t going well – when it’s been months or even years since you last wrote much, or when your goals all seem a very long way away – then you might start to wonder if you should just give up on writing altogether.

Don’t Pay Too Much Attention to “Success Stories”

Have you ever come across an article or blog post about a writer who seemed to be superhuman?

Maybe they got up at 4am every day to write a chapter of their novel before heading into the city for their high-flying job.

Or maybe they wrote six novels in six months despite having a baby and a toddler to look after.

Or maybe they shot to bestsellerdom despite never having previously published a word of fiction before.

There are plenty of success stories out there – and it’s always lovely to hear about writers who are living their dream.

But – if I’m being totally honest! – it can also be more than a bit discouraging to read these sorts of stories. After all, if Famous Writer succeeded despite all the obstacles facing them, why can’t I find the time and energy to write more fiction?

What I remind myself, and what you might need to remind yourself too, is that you only see the “outside” of someone’s success.

You don’t know what’s going on “inside” their life.

Their reality might not match up to what you imagine.

Maybe their first novel was a runaway success, yes … but they spent a decade writing away, publishing nothing, before that.

They could have advantages that you don’t see.

Perhaps they’re financially supported by their spouse, or maybe their parents are on hand to do a ton of childcare. Maybe their baby is one of those almost-mythical ones that sleeps through the night.

Or they might be running headlong into problems that you’re avoiding.

Maybe they’re facing a health crisis or burnout due to working long hours. Perhaps they’ve taken some unethical shortcut, like plagiarising someone else’s work. Maybe they’re a workaholic who, frankly, isn’t all that lovely to live with.

Alternatively, they might simply be lovely, constantly hardworking, focused, able to thrive on five hours sleep, and great at writing. Which is fabulous, but we can’t all be superhuman! 😉

Never beat yourself up because you’re not as “successful” or “productive” as another writer.

Enjoy Writing for Its Own Sake

I know this can be hard – especially if you’re short on time.

But, as much as possible, allow yourself to enjoy writing. See it as something you can do for fun, just because you want to – not something that has to lead to a finished story or chapter, or something that has publication or a large readership as the goal.

For me, this means thinking back to how I enjoyed writing in childhood and in my teenage years. Yes, I hoped it’d be an eventual career for me – but I also wrote simply because I loved to.

Give yourself permission to have fun with your writing. That might mean something as simple as spending five or ten minutes writing in response to a prompt, or writing something that you’d never want to share with anyone, just for the love of it.

It could also mean exploring a non-commercial area of writing, where you’re not doing it with any expectation of money – fanfiction is a huge area, for instance, though you might also consider writing something like a family history aimed at a readership of your descendants, or a poem for a relative or family member.

Take a Break if You Want To

You’re still a writer even if you take a break from writing.

Maybe you’re at a point in your life or your career where you can’t comfortably fit in the writing you want to do: where doing so would mean sacrificing other things that are important to you, or where you’re simply tired and need a rest.

It’s fine to stop writing for a while.

It’s also fine to decide to write less. That might mean changing the timeframe of your goals, or committing to a small daily target (e.g. “write for five minutes”) rather than an overly ambitious one (“write for two hours”).

My son is in full-time school as of this morning, and – co-incidentally – my daughter turns six and a half today. That means that this is the first week in six and a half years where I’ve had five six-hour workdays available to me.

Over that time, I’ve taken several breaks from writing, in various ways … and while I’m very much looking forward to having more time for my writing career, I’m glad was lucky enough to have plenty of time with my kids during their early years.

You might have a similar situation in your life: something which is temporary (even if overwhelming) and which means you want to cut back on your writing, or even hit “pause” for a while.

It’s fine to do that. You’ll return to writing with a host of new experiences … and, hopefully, an abundance of enthusiasm and energy.

Having big dreams for your writing is a wonderful thing … but it can also be very disappointing when reality doesn’t live up to those dreams.

Don’t give up dreaming. Focus on your path forward (not on other people’s success stories); enjoy writing for its own sake, as much as you can; and don’t be afraid to take a break – or at least minimise your expectations of yourself – when you’re going through a tough or busy period.

I’m going to be running On Track – my six week course/challenge for writers who want to make progress on their writing, with the help of a supportive group – for six weeks from Monday 23rd September onwards.

You’ll be able to join from this Thursday, and we’ll be setting our goals from next Monday (16th) and starting properly on Monday 23rd.

For a quick peek at the details, or to join the waiting list so you get an alert as soon as I open up the doors, head to the On Track course page.