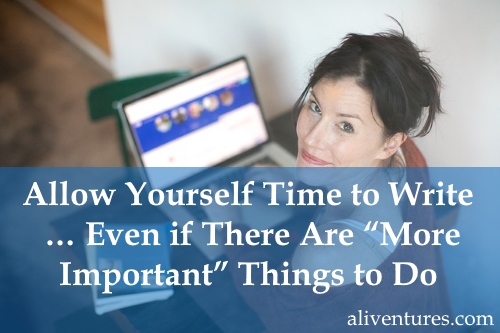 This is the second post in a month-long series about procrastination. You can find the first post here: Three All-Too-Common Writing Fears Holding You Back … and How to Beat Them.

In the Aliventures survey a couple of weeks ago, one reader wrote:

“When I have the time and get my butt in the seat, my brain turns on me and says that I don’t really want to be doing this work anyway. I convince myself that writing isn’t for me and that there are more important things to be doing with my time.”

I think this sense that there are “more important things to be doing” is a stumbling block for a lot of writers.

I had a dig around online to find some other writers describing this type of writing guilt, and I found plenty of examples. Here are just three:

I feel selfish and indulgent when I take time out to write my fiction. I find myself doing my paid writing first (which of course should come first) and everything else that needs doing before I allow myself time to write. By this time, it is usually 10pm at night and my bed is beckoning!!

I recently spoke with a fellow writer who also shared her concerns around spending her limited free time “luxuriating” in writing. The struggle of doing more of other activities, attending to more chores, or doing something that others find “a better use of her time.” She was recently told that because her writing isn’t being compensated then it isn’t really a good investment. That’s a shame.

(Writing When You Don’t Want To Write, Kimberly Charleston, KimberlyCharleston.com)

For the past three years, I’ve been putting the heat on myself to find an agent and a publisher because I thought I couldn’t justify spending time writing when I should be cleaning the kitchen unless I got a publishing contract.

A couple of things jumped out to me here:

While chores need doing, I don’t think most of us would say that chores are the most significant thing going on in our lives.

Why Writers Feel Guilty About Taking Time to Write

So what lies behind this guilt about writing?

One huge issue is that some writers really struggle to see their own writing as something important.

They might see writing as something important in the lives of others – of freelancers, perhaps, who make money writing, or of published well-known authors who make lots of money, or of literary authors who might not make much money but who receive critical acclaim.

But their own writing seems like, at best, a hobby. And often, it feels like something rather too self-indulgent – like eating too much chocolate, or binge-watching a whole series in a weekend on Netflix.

Well, even if writing is “just” your hobby, we all deserve hobbies!

And if your writing is something more than that to you – you’re hoping to get a book published, or to establish a new career – then that’s totally valid too.

Every day, people start businesses. Every day, they fail. Loads of businesses fail, from tiny ones involving a single self-employed person who later goes back to their day job, to giant ones, headed by CEOs who take twelve years to turn a profit.

Why Isn’t Writing Always Seen as a Worthwhile Use of Time?

Let’s say you’re a mother to two young children. One is in school; one is at home with you during the day and still has a nap after lunch.

When you take time to write during nap time, you feel guilty that you’re not doing something more “productive,” like cleaning the house. After all, you’ll probably never make much money from your writing.

Let’s imagine, instead, a father to two young children. One is in school; one is at home with him during the day and still has a nap after lunch.

When this father takes the time to draw up a business plan and apply for funding during nap times, you don’t think of him as being “unproductive”. You don’t think “he should get the dishes done instead”.

And yet, that father will – statistically – probably never make much money from the business.

Now, I realise I’ve drawn stark lines here where there are, in reality, no lines. There are plenty of men who write novels and plenty of women who start businesses.

So if you’re a woman, or non-binary, and you’re struggling to see your writing as worthwhile, here’s a question to ask yourself:

If I imagine a male writer, in exactly the same circumstances as me, would I think of his writing as worthwhile?

If you would – then why isn’t your writing just as important as his?

Now, your situation may be different. Perhaps the type of writing you’re doing just doesn’t seem important to you, even though you really enjoy working on it, or maybe you really do have to get all the housework done because you’re a single parent / a carer / the partner of someone who works really long hours outside the home.

Whatever your exact situation, here are some things you might want to try in order to beat the writing guilt:

#1: Set aside a specific day or time for writing. Many writers find it easier to feel that they’re legitimately using their time to write if they’ve made a decision ahead of time that “Tuesday afternoons” (or whatever it is) is for writing.

#2: Get out of the house to write. I find it a lot easier to sit and write in my local library (which is where I’m drafting this!) than at home because there’s literally nothing else I “should” be doing when I’m in the library.

#3: Schedule housework. The nature of housework or chores around the home is that there’s always more that could be done. You do one load of laundry and there’s another load within hours (or at least it seems that way in our house). It’s all too easy for housework to take up the whole of your day. One way round this is to schedule it in:give yourself a specific slot each day/week when you clean, and have a rota on what you do when.

#4: Meet with other writers. If you can join an in-person, local writing group, I highly recommend that. But if that’s not possible or practical for you, online groups can be hugely helpful and supportive too. Simply talking about writing with other writers can help you realise that your writing is valid and significant.

If you struggle to see the worth of your writing, or if you often find yourself hesitant to write or feeling guilty about writing because there are other things you “should” be doing, please do feel free to reach out in the comments below or by email. I’d love to be able to send you some encouragement.

Also, if this is a battle you’re fighting at the moment with yourself, do let us know what’s working for you: maybe your tip will help someone else in a similar situation. Hang on in there, and keep writing – it is important and worth prioritising. 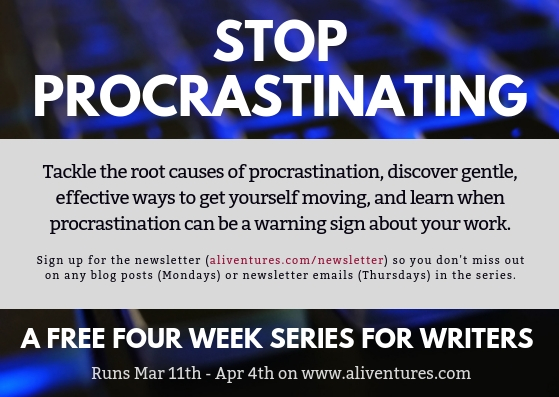 Over the next three weeks, I’ve got more posts (and newsletter pieces) planned about why writers procrastinate, how to focus (and refocus), how to know when procrastination might be due to a problem with your writing, and more.

Make sure you’re on the newsletter list so you get the Monday blog posts and the short Thursday newsletters straight to your inbox.

If you missed them, you can catch up with earlier instalments in the series here:

#1: Three All-Too-Common Writing Fears Holding You Back … and How to Beat Them (blog post)

#2: What’s Really Behind Your Procrastination? (newsletter)