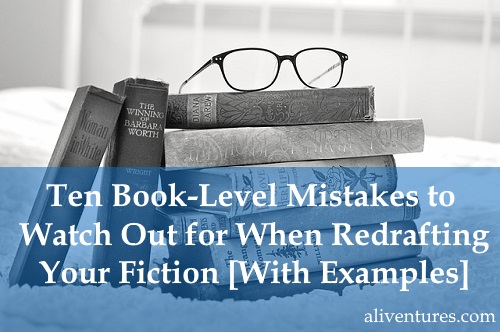 A few weeks ago, I posted about sentence-level mistakes: ones that are easy to spot from a page or a paragraph of writing.

Even if you write flawless prose, though, it’s possible to make bigger-picture mistakes over the course of a novel or novella … and these can sometimes be trickier to notice.

Here are ten that always make me wince (and, often, cause me to put a book down altogether, never to pick it up again):

#1: Too Leisurely a Start

When you’re first getting into a new book, chances are, you want to be drawn into the story quickly. Most readers don’t have much patience for long, slow chapters that exists essentially to set the scene. Even if the author is laboriously setting up elements of the story that’ll become important later in the plot, this isn’t obvious at the time, and readers can lose patience.

From a very unscientific poll of my Facebook friends, it seems that fantasy novels are particularly inclined to get off to a frustratingly slow start.

Example: While I love C.S. Friedman’s writing, her Coldfire trilogy didn’t draw me in at all for the first 100 pages or so. I’m glad I stuck with it, because I then devoured the rest of it in under a week (and all three books are hefty ones!) … but she nearly lost me in the earlier chapters.

I don’t believe that, as a writer, you need to create characters that are always “sympathetic” – but your characters do need to be interesting to read about.

Bland, one-dimensional characters will quickly bore the reader. Characters who are annoying may work if it’s primarily other characters who get annoyed, or if they play a minimal role in the story: if the reader finds them insufferable, and they’re a major part of the story, that’s likely to get your book slammed shut in irritation.

Different readers may, of course, react differently: some may find a character endearingly pathetic while others find them a spineless, passive wimp.

Example: Ana in Fifty Shades of Gray. To be fair, some readers like her; others find her overly naive and prone to the same few annoying character quirks (rolling her eyes, biting her lip, thinking about her “inner goddess”…)

Even if your characters aren’t exactly bland, they can be rather too one-dimensional. Sometimes, this is what readers of a particular genre expect (action stories and thrillers may get away with a strong focus on plot and less well-developed characters) … but personally, I think any novel will benefit from complex, multi-faceted characters.

If your characters seem like thin stereotypes, readers don’t have a reason to care about them. If anything, you might be better off with outright annoying characters: at least, that way, readers will have an opinion.

One mistake I feel some writers make here is to rely on a “character questionnaire” or a list of interesting quirks to try to make characters three-dimensional. I think characterisation goes a lot deeper than that. If you do want to use some prompts to help, try Holly Lisle’s excellent Create a Character Clinic (Amazon.com / Amazon.co.uk).

Example: For me, the film Suicide Squad suffered a bit from this – I gave up after the first half! While Harlequin, for instance, had an interesting backstory, she was played too much as “crazy hot chick”. Other members of the “squads” felt thin and undeveloped – perhaps because they were all introduced so quickly.

Whatever type of fiction you write, you’ll need to pay attention to the pace.

Some genres naturally lend themselves to fast-paced fiction: things happen quickly, without long passages of description or introspection. (Think thrillers, for instance.) Other genres can have a more leisurely pace – literary fiction, in particular – without readers minding.

With most genres, you’ll probably want some variety within your pacing; in particular, you’ll likely want a sense of the action speeding up as you move towards the climax.

While most of the pacing issues that have bothered me involve novels that run too slowly, going too fast can also be an issue (particularly if you yank the reader through too many plot twists and revelations in a row).

The Redemption of Althalus by David and Leigh Eddings – I felt like this needed to be cut considerably to work (and a lot of reviewers on Amazon felt, like me, that the dialogue is excessively chit-chatty).

Little Face by Sophie Hannah – this had too many twists too suddenly at the end; I felt like I needed time to catch my breath!

#5: Scenes That Don’t Achieve Anything

This ties in closely with poor pacing: some novels involve scenes that simply aren’t going anywhere. To be fair, most of these get excised from published fiction … but it’s easy to let them creep into a manuscript-in-progress.

Sometimes authors get a bit bogged down trying to show everything that happens: in fact, it’s fine to “tell” – i.e. summarise – to keep your story moving. Maybe your characters go on a four-hour drive to get from Plot Point A to Plot Point B. You don’t need to describe what happens on the drive (unless something significant takes place – something that reveals or deepens characterisation, or that changes the plot). You can just start a new chapter with, “Once they arrived…”

Example: Harry Potter and the Deathly Hallows. While this wasn’t as bad as I remembered on a recent re-read, there’s definitely a sense of the main characters wandering endlessly and fairly unproductively during several long scenes.

As one reviewer puts it: “The seemingly endless scenes where Harry and Hermione are in their tent hiding out around the country trying to decide where to look for Horcruxes are irritating. It feels a little as though Rowling got caught on a theme because at first, those the tent scenes with Harry, Hermione and Ron do serve to show the difficulty of the task ahead of them and the strain that it’s putting on their friendship. As it progresses however, it feels like a chase scene without resolution as Harry and Hermione disappear and reappear around the country, pursued not by bears but Death Eaters and Ministry officials.”

Have you ever been introduced to lots of people at once, only to forget all their names? It’s much easier when you meet new people one or two at a time.

Some stories actively require lots of characters (family sagas, for instance); if that’s truly the case for your novel, consider including a list or family tree at the start to help the reader keep track. Don’t introduce everyone at once, either: let the reader get to know your characters a little more gradually.

If you have a lot of relatively minor characters, it’s worth considering whether you can remove or amalgamate some (does your protagonist really need four best friends, or would two be enough)?

Example: The whole Harry Potter series has a lot of named characters, some of whom get very little more than a name – for instance, a lot of readers thought Blaise Zabini was female until Half-Blood Prince. School-based stories do tend to be prone to having a lot of named but very minor characters, and this isn’t necessarily a fault … but it’s something to be aware of if you’re writing a story set in a school.

#7: Confusing Jumps in Time or Place

If your story moves around a lot – perhaps following two timelines, one present, one past – then you need to be really clear with the reader when and where they are at any given time.

Sudden leaps back or forward in time, or jumping to a new location without any indication of how the characters got there and how much time has elapsed since the previous scene, can be very disorientating for readers.

You might want to check out Handling Time in Fiction for some general advice, or my newsletter piece on Handling Time Jumps for advice on novels which move back and forward in time.

Example: While Behind Closed Doors, by B. A. Paris, wasn’t generally confusing, it did seem to jump back and forth between two timelines in a way that perhaps could have been reduced: I’m not sure it made the novel any stronger and it became a little annoying to keep getting shunted from past to present.

#8: Sudden, Accidental Death of a Protagonist

While I’m sure this can work well, as a reader, I’ve not yet come across a novel that manages to make it work. My normal expectation, as a reader, is for protagonists to survive to the end of the book (even if they go through some dark times along the way).

If a character is murdered or killed through some sort of meaningful plot event, I can live with that. I don’t like it when novels try a little too hard to emulate life with a character dying in an accident, especially when the novel is close to done. It might work in the early chapters, as part of the set up, but not when I’ve spent the vast majority of the book getting to know the characters.

Example: One Day by David Nicholls and My Sister’s Keeper by Jodi Picoult. In both, a protagonist dies in a road accident before the end of the book. (Sorry about the spoilers!)

This is a tricky one. Some genres accept (even encourage) a certain degree of sensationalism. Even so, if you go too far, you’re going to lose readers.

If characters are graphically tortured, even if you’re writing dark horror, you may put find that some readers can’t stomach it. If anything, I think too much focus on gore distances us from characters, and if your novel does involve some really dark happenings, you can include those without describing them graphically.

Of course, if you’re writing in some genres, there’ll be serious limits to how sensationalist you can be: cosy crime isn’t going to be a good place for extremely bloody murder scenes, for instance, and fans of Christian/inspirational romance won’t be too keen on your very explicit sex scenes…

Example: Stephen Leather’s The Basement, which is a mystery/thriller novel (rather than one billed as horror). I had thankfully nearly forgotten this rather horrible novella, but one reviewer summed it up well here:

#10: An Unsatisfying or Rushed Ending

In some genres, the whole point of the novel is the ending: think mysteries and thrillers. If you get it wrong, that means that readers have spent hours reading your book only to find the payoff entirely unsatisfying.

Unsatisfying ending tend to involve one of these:

Example: Behind Closed Doors by B.A. Paris had, for me, a not-entirely-satisfying ending. Yes, the good characters triumphed – but I wanted considerably more of a showdown between the protagonist and antagonist.

All of these mistakes are ones that you might get away with (as you can see from these published examples!) – but they’re ideally things you want to look out for, and fix, when you’re drafting. They’re not necessarily about how good a writer you are, either: some of the books I’ve mentioned were great on the sentence-by-sentence level, but they just didn’t quite work overall.

Have you run across any of these mistakes in your reading? Or do you have a different book-level mistake to add? Let us know in the comments…