Practical Ways to Handle the Passage of Time in Fiction 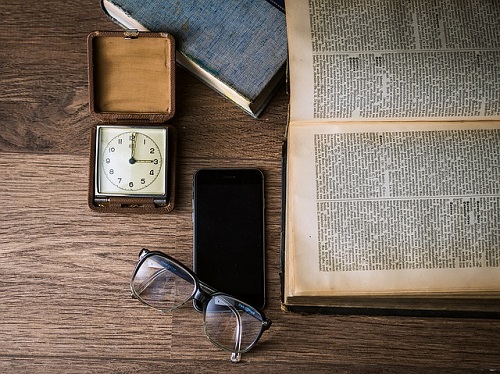 Whether you’re writing a short story or an epic novel series, fictional time is going to pass during it.

Obviously enough, fictional time is not the same thing as real time (unless you’re watching 24). Your novel might take four hours to read – and cover events that take place over the course of two years.

That novel that takes four hours to read could take a year or more to write.

This means that before you think about how to show time passing during the story, you need one tool firmly in place.

The Crucial Tool that Will Save You Tons of Editing

You need to know when every single scene of your novel (or short story) takes place.

You can put this in a spreadsheet or write it in your chapter plan. Here’s an example:

That was the spreadsheet I made to attempt to fix various time-related issues, and revise bits of the plot when going between Draft 2 and Draft 3, in Lycopolis.

Note: I have no idea what past-Ali was thinking, setting a scene on “Monday or Tuesday” . Be clear with yourself (even if the reader never needs to know the exact date). 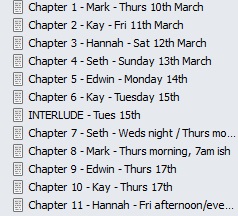 My current favourite way is to (a) include a day, date and rough time of day when planning scenes and to (b) put the day and date into each chapter’s Scrivener title. (My chapters are essentially single scenes.) You can see my novel-in-progress chapter titles to the right.

I’m a bit embarrassed to admit that I’ve made the mistake of leaping headlong into the first draft without a time plan not once, not twice, but three times. Every time, when I’ve hit the editing stage, it’s been a huge pain to sort out time-related problems – like a character, or a critical McGuffin, being in two places at once.

However you organise your time plan, make sure you have one. Know who’s involved in each scene, and when that scene takes place.

(If you don’t want to plan your whole novel in advance, that’s fine. Each time you sit down to write a scene, add in the day, date and time it takes place at the top – you can delete this when you edit.)

Why Time in Fiction Can Be Problematic

In real life, time passes at a constant rate (even if it feels like it’s slowing down or speeding up at times). We sadly don’t have the option to skip or fast-forward through the boring bits.

In fiction, readers will expect you to focus on story-relevant events … and leave out the rest. Unless the conversation over breakfast is important to the story, you don’t need to show your characters sitting down with their cereal and toast. Unless your protagonist’s commute to work involves something interesting happening, you don’t need to show him getting in his car and driving there.

It can feel even more difficult when you’ve got large gaps of time in your novel. Perhaps there’s a six month period in the middle where nothing much happens – or you want to jump 30 years or 100 years in the middle.

We’ll take a look at big jumps in time first (weeks or more) and then look at smaller jumps (between days, or between parts of the day).

Dealing with Big Jumps in Time

Let’s say your novel begins with two characters, Tom and Annie, as seven-year-old children playing together. They promise to marry one another when they’re grown up.

Annie moves abroad, though, with her parents, and loses touch with Tom. Twenty years later, she’s about to marry someone else.

How do you handle that twenty-year gap?

What I wouldn’t suggest is that you summarise their lives apart. Long passages of summary aren’t generally very interesting to read – by their very nature, they’re undramatic – and if the events of those 20 years are going to be important to the rest of the story, you can work them in later on.

And Then It Happened (Amazon.com / Amazon.co.uk), by Linda Green, is split into two parts; there’s a jump of about three months between them.

The second part begins, like the first, with a date, “Tuesday 19th August 2010,” then the narrative resumes with a chapter that includes a fair amount of summary. (The viewpoint character has a strong, engaging voice, so this works fine.)

Ender’s Game (Amazon.com / Amazon.co.uk), by Orson Scott Card, begins when Ender is six; he’s twelve by the end of the novel.

The reader is frequently clued into time passing, often with a reference to characters’ ages. (“Valentine celebrated Ender’s eight birthday alone” … “The boy is fourteen, the girl is twelve”). Sometimes the length of time that’s gone past is simply explicitly mentioned (“But things were quiet now, had been quiet for a year”.) Often, there’s a time jump at a chapter break.

Dealing with Small Jumps in Time

Almost every novel is going to involve small jumps in time – perhaps from one day to the next, or from morning to evening.

Let’s say you’re writing a novel that takes place across several weeks. There’ll be days when nothing particularly interesting is happening (maybe your characters are at work or school) and days when lots of plot-relevant events are taking place.

There are several ways to move readers from the end of one interesting event to the start of the next. You can:

Pure summaries are usually best kept very short. For instance, The train was running late and horribly cramped. By the time Joe got off, his smart new suit was hopelessly wrinkled.

Almost any novel will involve small jumps in time – keep an eye out for them in whatever you’re currently reading.

Here are a couple of examples from novels I’ve read recently.

Hitch stayed where he was and looked up at the moon. Seemed like the old girl was winking at him. Might it be she knew something they didn’t? What secrets did she hold within all that silence?

Walter liked the early mornings, especially in the summer – with the full moon still hovering near the horizon, on its way to setting.

It’s immediately clear that we’ve moved on a bit in time, and it seems safe to assume (particularly with the use of the moon in both chapters) that Walter’s scene takes place during the following morning, rather than several mornings after the events of Chapter Two.

At last the poovers can be emptied. On the way to the maintenance sheds, the other bod is boasting about his scores. Paftoo can only nod; he has had quite enough. All he has heard for hours is the rattling slurp of his machine and it has put him half to sleep.

(later, after a double line break)

Finally, the sun starts to set. The sky is darkening and the clouds are tipped with orange. Soon it will be night.

Paftoo feels such relief. He is looking forward to night. That’s when they switch off.

We get a sense of the monotony of Paftoo’s day without having to live through every moment of it. Words like “at last” and “finally” not only clue us in that some time has gone past, they indicate how Paftoo feels – he’s bored and time has passed very slowly for him.

Readers are well-used to stories moving forward in jumps, whether small or big – and as you can see from the examples, simple statements like the current date, or “for a year” are fine.

Handling time can feel a bit awkward when drafting, and it may be something that you want to revisit when you edit your work-in-progress – to check that transitions feel smooth, and that readers don’t get lost about “when” in the story they are. In the first draft, just make sure you know when everything’s taking place.

Have you got a different technique for handling the passage of time in your novel or short story? Or have you come across this done particularly well – or particularly badly! – in something you’ve read? Share it with us in the comments below.

This post is filled with practical suggestions for using clear time markers, so the reader doesn’t feel confused or lost.

Time Marches On: Dealing with the Passage of Time Between Scenes, Janice Hardy, Fiction University

Janice brings together a bunch of great examples, particularly relevant if you’re writing fantasy or adventure.

Altering the Quality of Time in Your Novel, C.S. Lakin, Live Write Thrive

C.S. takes a slightly different tack here and looks at the quality of time – how the passage of time within your story feels to the viewpoint character and, by extension, to the reader.

How to Write Fiction (And Think About It) (book, Amazon.com / Amazon.co.uk) has a whole part devoted to “How to Manage Fictional Time”, with lots of examples. It’s a more theoretical / academic book than most writing guides, but well worth a read even if you’re writing genre rather than literary fiction.