Why Some Writers Are Much Faster Than Others: Four Quotes and Six Key Reasons 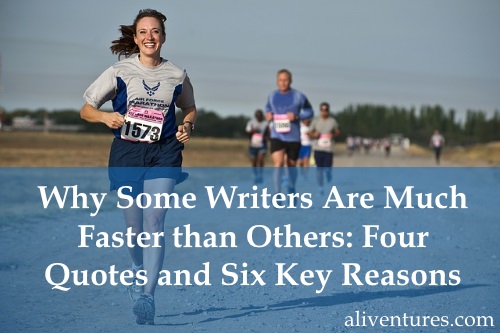 This post was originally published in November 2017, and updated in June 2020.

I’ve written before about writing fast versus writing slow – but it’s an issue I wanted to look at again, particularly in terms of how many words per hour or per day is a “good” rate of writing.

I’ve come across writers for whom a hundred words in an hour is great … and others who won’t be happy unless they’re hitting 3,000 words per hour or more.

Are the slow writers just procrastinators?

Are the fast writers just hacks?

I don’t think so. I think that there are a lot of factors affecting how fast (or not) writers physically get words down onto the page – and neither fast or slow is “better”.

Before we take a look at some of the factors that affect writing speed, I’ve got a few quotes from you from different writers about how fast they write:

10k a day is my high point as a professional author whose child is now in daycare (PRICELESS). I write 6 – 7 hours a day, usually 2 in the morning and 4-5 in the afternoon, five days a week.

If the material fails to convince me after several sessions I put it aside but if direction and form begin to emerge a point will come when the notes merge into drafting. Whether there are ten drafts or over a hundred I carry on until the poem feels settled.

How Long Does it Take to Write a Poem, Myra Schneider, Poetry Magazines

So [my wife] and I came up with a plan. I would, for a four-week period, ruthlessly clear my diary and go on what we somewhat mysteriously called a “Crash”. During the Crash, I would do nothing but write from 9am to 10.30pm, Monday through Saturday. I’d get one hour off for lunch and two for dinner. […] I kept it up for the four weeks, and at the end of it I had more or less the entire novel down: though of course a lot more time would be required to write it all up properly, the vital imaginative breakthroughs had all come during the Crash.

Kazuo Ishiguro: how I wrote The Remains of the Day in four weeks, Kasuo Isiguro, The Guardian

Why Some Writers are Much Faster than Others

There are plenty of reasons why some writers get down many more words per hour than others (beyond the obvious one of “some writers procrastinate a lot”). What you write and how you approach writing can make a massive difference.

I think we can take it as a given that poetry takes a lot longer to write, per word, than prose. A poet might easily spend a full day crafting a single sonnet – 14 lines, or about 100 words. With poetry, every single word needs to be just right. A great poem might be read over and over again, in a way that a novel wouldn’t.

I’ve read (and enjoyed) plenty of literary and classic fiction. I’ve also read lots of pacy contemporary fiction. Both are valuable in different ways. It’s hard to deny, though, that literary fiction takes longer to craft: the writing style itself is critical in a way that isn’t true for commercial fiction.

#3: (Fiction) Planning Before You Write?

Some of the very fast writers I know, like Johnny B. Truant and Rachel Aaron, have a process that involves careful planning. Johnny has written about using “beats” to plot out scenes ahead of time, and Rachel Aaron explains it as, “If you want to write faster, the first step is to know what you’re writing before you write it. […] I mean working out the back and forth exchanges of an argument between characters, blocking out fights, writing up fast descriptions.”

#4: (Non-Fiction) Planning and Researching Before You Write?

If you’re a non-fiction writer who separates the planning (and research) stage from the writing stage, you’ll be able to get words down much faster than someone who’s researching as they go along. A decade and a half ago, as a student, I could write a 1,500 word essay in under two hours because I had a very structured planning and researching process.

I’ve only tried dictating a tiny bit, and I still type nearly everything I write – I’m so geared to it as a way of thinking. But I know some authors who dictate their work, which means they can hit much a much higher words-per-hour rate than those who type: anywhere between 3,000 and 5,000 words per hour is common.

#6: Drafting Carefully … or Editing a Lot?

When I write novels, I like to draft fast then revise completely (as in, I normally start over with a new, blank file). Other authors prefer to draft more slowly but do less editing afterwards. Neither method is “better” – it probably takes the same length of time either way.

Whatever your own writing practice, and however fast you currently write, it’s worth looking at how that’s working for you. If you’re writing commercial fiction at a rate of 500 words per hour, could you increase that a bit – without any drop in quality? Are there ways you could focus better while writing, to get more done and enjoy it more too?

Conversely, if you’re writing at a breakneck pace – thousands upon thousands of words every day – is it sustainable for you? Are you enjoying the writing, or would you be happier if you slowed down a little?

As I say, there are no right answers! What matters is finding a way of writing that uses your time as effectively as possible and is sustainable for you in the long term. 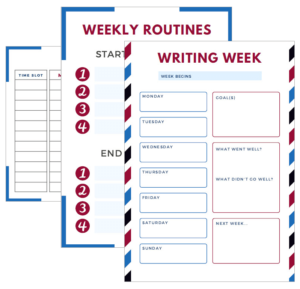 Want to fit more writing into your life? Then Supercharge Your Writing Week might be just what you need. It’s a 22-page guide plus a set of printables designed to help you make space in your week for your writing, with lots of tips on overcoming common problems along the way.

It’s currently just $5 until the end of this week (Friday 12th June).