Should You Ever Edit While You’re Writing? 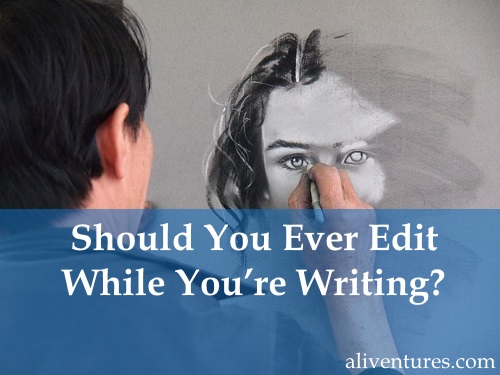 This post was originally published in October 2017 and updated in August 2020.

A lot of writers will say that you should never, ever edit when you’re writing.

You can even get software that disables the backspace key or that starts eating your words if you don’t type fast enough (Write or Die).

Personally, I think that’s a little bit extreme. A rather more balanced approach is fine!

While too much editing when you’re writing can be a real problem, if you’re occasionally hopping back a few sentences to tweak something, or if you backspace every so often to fix a typo, that’s fine. (I type fast, which means I tend to end up correcting mistakes several times in a sentence.)

Here are my rules of thumb for keeping writing and editing as distinct as reasonably possible:

#1: Try to Write the Whole Draft Before You Go Back and Fix Things

If you’re writing a novel, it’s almost inevitable that you’ll end up writing something you later change your mind about. You might include a scene, for instance, that you later decide to cut or radically change.

Try not to go back and make those changes while you’re still drafting. It’s easy to get bogged down taking out scenes (or entire characters!) – at the expense of forward momentum.

I don’t think I’ve ever written a novel draft that didn’t involve massive changes between Draft 1 and Draft 2, especially in the early chapters.

With my novella Not So Imaginary, I’ve  ended up cutting two early chapters of material going from Draft 1 – Draft 2.

When I drafted the first book in the Lycopolis trilogy, there were all sorts of things that had to change. I cut out two characters, for instance. So I could get through to the end of that draft, I didn’t go back and change the chapters they appeared in until I’d finished the whole thing.

If you realise, part way through drafting, that you’re going to need to do some heavy rewriting earlier on in your novel:

#2: Make Minor Edits As You Write (If It’s Helpful)

I mentioned this earlier: it’s fine to go back and fix a typo while you’re drafting – if you want to.

Personally, I find typos and spelling mistakes incredibly distracting. I’d much rather take the two seconds to fix them than to try to write on, gritting my teeth and ignoring them!

You might feel differently. When I was taking my MA in creative writing, I had a tutor who said he drafted without worrying about punctuation – he just added it all in afterwards. Just the thought of that makes me shudder, but it obviously suited his workflow.

What matters is that, overall, you’re making good forward progress. If you sit down to write for an hour, you want to finish that hour with a reasonable number of new words. (Your writing speed will depend on your genre and your experience – as a rough rule of thumb, I’d say 500 words/hour is fine, 1,000/hour is great, and 1,500/hour is amazing.)

If you tend to spend a lot of time changing each sentence before you move on, you could:

#3: Plan Your Scenes Before You Write Them

I have to admit that “plan your scene before you write” is one of those excellent pieces of advice that I often fail to follow! When I do stick with it, though, I find it really does help.

(With blog posts, I always plan before I write, and never have any problems doing so. I suppose fiction always feels to me like it should emerge more organically … though when I let that happen, I all too often end up with a mess.)

I’m sure lots of different writers have advised something similar, but the person who really sold me on this idea was Rachel Aaron, in her post How I Went From Writing 2,000 Words a Day to 10,000 Words a Day.

If you want to avoid writing scenes that meander, that don’t advance the plot, and that eventually get cut or seriously edited, then spend five minutes planning before you write.

Rough out what’s going to happen in the scene (you might include snippets of dialogue too).

You might even want to close your eyes and try to “watch” the action in the scene as if it’s playing out on a scene in front of you.

If you struggle to plan scenes (or blog posts, or whatever it might be) before you write:

Ultimately, your writing process is unique to you. It’s up to you to figure out what works: how can you produce your best work, without wasting time?

For me, this means drafting fairly quickly before working on extensive revisions – but for you, there might be a different balance of writing-to-editing. (K.M. Weiland, for instance, integrates editing at different points in her first draft – she explains her process here.)

Whatever you do, though, be deliberate about it. If you’re going to edit as you write, make a decision about how exactly that will work best for you. If, like me, you want to get that first draft done as quickly as possible, have a plan for how you’ll keep it at least more or less on track.

Do you tend to edit as you write or is it a habit you largely avoid? What one thing could you do to make better forward progress with your current draft this week?