Five Handy Ways to Patch Plot Holes in Your Novel 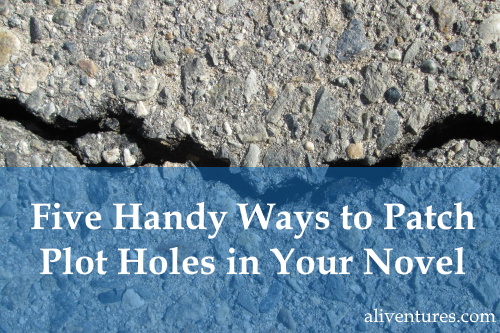 Sometimes, you feel like your story hangs together pretty well … until you re-read your whole draft.

That’s when you notice all the places where it’s not quite working.

If there’s a tiny inconsistency (like a character changing eye colour half way), that’s pretty easy to fix. Sometimes, though, you’ve got an actually plot hole.

What is a Plot Hole?

Plot holes can be a particular issue in fantasy and science fiction, where you’re making up the (physical and social) rules for your world. For instance, in a fantasy world with a spell to duplicate food, it doesn’t make sense for your magic-using character to be scavenging berries to supplement their meagre supplies.

Do You Need to Fix Plot Holes?

Some minor plot holes might well go unnoticed by readers (or viewers, if you’re writing for the screen). You definitely shouldn’t count on this, though! If even one reader spots a problem, that will spoil the story a little for them, by breaking their immersion.

It can be a pain to fix plot holes, but even ones that seem ambiguous (e.g. a character acting particularly stupidly) should ideally be addressed.

With tiny plot holes, it’s pretty easy to fix them. Perhaps you mentioned in an aside in Chapter 2 that your character’s house has two bedrooms – but in Chapter 11, they need to host a family gathering which requires them having at least three rooms. You can simply change the earlier reference.

With huge plot holes, you’re going to need to rewrite – perhaps extensively. If you discover the plot hole fairly early during the writing process, you might decide to simply take your story in a different direction. Instead of your character Joe miraculously travelling from York to London in less than an hour, have him arrive two hours late for a critical meeting … and explore the ramifications of that.

Often, though, you’ll want to keep your story on track and just patch the plot hole. If you can’t simply remove the plot hole altogether (however nice a detail it was), here are some useful ways to patch it up. I think of these as “plot tape” to plaster over the gaps:

Method #1: Injure or Incapacitate Someone

If you need your good guys to fail, despite their greater skill or strength in numbers, having them do something rash or stupid can frustrate readers (if there’s no good reason for it).

A better way forward is to injure or incapacitate someone on their team. This can be great for not only putting that character out of action, but also tying up other members of the team with helping or rescuing them.

A couple of good options are:

Method #2: Threaten Someone the Hero Cares About

Even the most cautious people can do reckless things if they’re motivated enough.

Need to get your hero back into the haunted house — even though they’ve got way more sense than to walk back in there? Have them hear a loved one calling for them — or maybe they could get a crackly phone call pleading for help.

Want your hero to start an ill-advised bar brawl with the villain? Have the villain hurt, threaten, or insult someone the hero loves dearly.

Depending on how volatile your hero is, this could work with something they care about – e.g. insulting their people/spaceship/friends/colleagues might be enough to get them to see red.

Technology can be a great fix for plot holes where you’ve realised you need your character in two places at once.

If you can’t figure out how to get Joe and Susan in the same place for a crucial conversation … then don’t! Figure out a different way for them to talk.

In a contemporary setting, that could be a video call (or a plain old phone call). In a historical novel, you might have them communicate by letter. In sci-fi or fantasy, you might have some form of telepathic communication.

Method #4: Motivate Them to Behave Out of Character

Maybe it defies belief that the character you’ve established as a rotten coward would leap into the fray at the crucial moment … or that your nicer-than-nice hero would callously leave the villain to drown in a vat of acid.

But characters are capable of a whole lot, given enough motivation. Perhaps that coward knows they’ll get a huge financial reward (or they’re fleeing from a worse threat). Maybe that hero has finally recognised how truly irredeemably awful the villain is, and how much harm would be done by allowing them to live.

By making the motivation clear and realistic, you can get your hero to behave in pretty much any way the plot requires – without it derailing their character development.

Method #5: Plant Crucial Equipment or Skills Earlier in the Story

It’s going to seem pretty unconvincing if your hitherto straight-laced protagonist reveals an astonishing skill at picking locks during the climax … so if you’re going to need them to use special skills, plant these early on. Show us their chequered past, or have them break into a room at some point when this is no big deal.

The same goes for special equipment. If your character needs to be able to leap from their bed and tackle a home invader in Chapter 20, then mention in Chapter 3 that they always sleep with a baseball bat under the bed.

Plot holes can be tough to avoid, especially if (like pretty much every author!) you end up drafting and redrafting your novel over a period of several months or even several years. It’s all too easy to forget what you’d established early on, or to end up with a situation where you have characters behaving in inconsistent or unrealistic ways.

By applying a bit of “plot tape”, though, you can fix those holes so they don’t show … and you’ll have a stronger story for it. 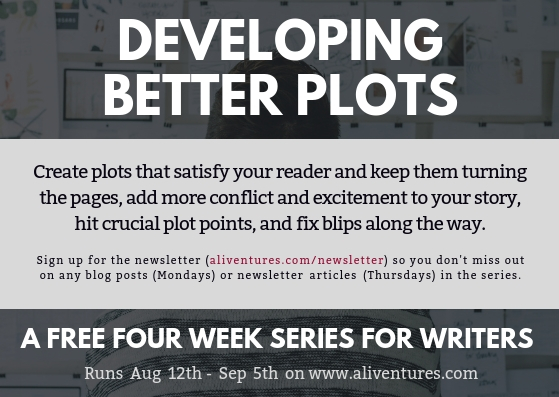 Want to develop stronger plots for your short stories and/or novels?

#1: What is Plot … and is it the Same Thing as Story or Narrative? (blog post)

#2: Is Plot or Character More important.. and How Should They Intersect? (newsletter)

#3: How Much Research Do You Need for Your Plot to Hold Together? (blog post)

#6: Five Techniques for Quickly Planning the Novel Scene You’re About to Write (newsletter)