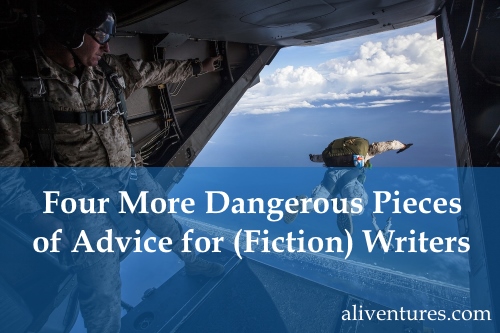 Last week, I gave you four pieces of bad – even dangerous – advice that writers all too often hear. Today, I’ve got even more bad advice! Most of this is aimed at fiction writers, though the final two could apply to any type of writing.

There’s a bit of a myth in the writing world that agents and editors hate prologues and will stop reading if they encounter one. While some agents may not be too keen on prologues, they’re clearly not going to reject an amazing manuscript just because it happened to include one.

Another part of this myth is that readers invariably skip prologues. I’m not convinced of that (I’ve read plenty of prologues!) but I do agree that it’s risky to start off one story only to abruptly jump into an entirely different one – or at least a very different part of the same story.

Here’s my take on it: don’t just have a prologue because it’s something that other books in your genre often do. (Fantasy writers, I’m looking at you!)

If you feel that your story really needs a prologue to set it up, though, then of course it’s perfectly allowed! You might decide to simply call the prologue “Chapter 1” (several of the Harry Potter books have a first chapter that’s essentially a prologue – e.g. in Harry Potter and the Philosopher’s Stone, the first chapter takes place 10 years before the rest of the book).

I’ve read plenty of novels that simply wouldn’t have been the same without the prologue: where the prologue added something essential (often plot information, but sometimes a particular tone). For some examples of prologues done well, try:

This is terrible advice. I think for many writers, it comes from their school days, when they might have been encouraged to come up with lots of synonyms for the word “said” in order to improve their vocabulary.

As a writer, though, you can use the word “said” an awful lot – and readers won’t even notice! It’s a good idea to use dialogue beats to avoid having too many instances of “said”, and you might occasionally want a different verb (e.g. “yelled” or “muttered”) … but stick with plain “said” as much as possible.

You want the reader’s attention to be on the actual dialogue, not on the dialogue tag. You don’t want them getting distracted by a fancy word like “opined”, or one that essentially restates the dialogue (e.g. “Please don’t hurt me,” she pleaded).

If you want more help with this, check out my post: Are You Using “Said” Too Frequently? Dialogue Tags and Dialogue Beats Explained.

Bad Writing Advice #3: “Don’t Use the Same Word Twice in a Paragraph”

While it can be awkward to have the same word coming up again and again within a few sentences, it really depends on what the word is!

The man stooped, picked up the ball, and dropped it carefully back over the fence.

I doubt you read that sentence and thought there were too many uses of the word “the”.

As well as misguidedly varying the word “said” (see point #2), some writers try to vary character names or descriptors in order to avoid repetition. I think this is unnecessary and also distracting.

For instance, contrast these:

“No point losing sleep over it, though, is there?” Max said.

“No point losing sleep over it, though, is there?” Max said.

His friend grinned. “Nah, given it up, mate.”

“What?” His own beer forgotten, the tall man said, “For good, you mean?”

Bad Writing Advice #4: “Let Your Characters Take Over and Follow Them Where They Lead”

I’ve been writing fiction with vaguely serious intent since I was fourteen, and one of the most consistently weird things I’ve heard from (often quite new) writers is that characters will “run away with the story” or “take over” … and that as an author, you should blindly follow the characters.

I can just about see where people might be coming from on this. It can take a fair bit of writing to figure out exactly who your characters are, what motivates them, what they’re most afraid of, and so on.

But characters do not simply take on a life of their own and run away with your story. They are, after all, figments of your imagination, with no actual existence outside your own mind.

A couple of things that could well happen is:

If you want to do some exploratory writing, go for it! But remember that your story still needs structure, your characters need to develop during the course of it, and you can’t simply use “the character wanted to do it” as an excuse to turn out a poorly structured novel.

Have you tried to follow any of these pieces of bad advice? Or have you come across some different writing tips that – on reflection – don’t seem to hold up? Let us know in the comments.