Should You Keep Writing Even if It’s Not Fun Any More? 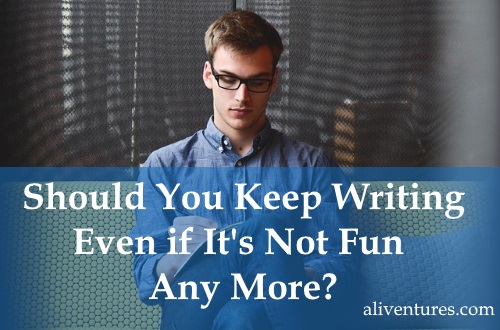 I mentioned in the Aliventures newsletter a couple of weeks ago that I finished NaNo on 23,000 words: not all that close to the 50,000 words I’d been aiming for!

So what happened? Several things: I had a bad cold, my kids were poorly, and we had a few unexpected little things go wrong. Some good stuff happened, too: I started volunteering one morning a week at my daughter’s school, and I picked up some more freelancing work.

All of this meant for less novel-writing time.

But one key thing that happened, perhaps more important than all the practical difficulties, was that I just wasn’t enjoying writing my novel.

Aiming for 50,000 words in a month was, frankly, unrealistic – and it was stressing me out!

On Sunday 11th November, for instance, I’d spent the day looking after the kids (Paul was out). I’d taken them to a birthday party, caught two trains home, given them tea, settled them into bed, and so on.

My five-year-old wanted me to stay outside her room while she fell asleep, so I sat on the floor with my laptop, trying to write a scene that just wasn’t coming together (and getting interrupted every three minutes by her wanting to ask for things).

This was possibly a new low in terms of “how badly can a writing session go”!

Maybe you’ve had similar times: times when you feel that you should write, but the fun’s gone out of it. When you feel overly pressured by a deadline, or when the project you’re working on has stopped being enjoyable.

Should Writing Be Fun?

There are plenty of types of writing that aren’t ever going to be “fun”, but that we do anyway. Maybe you have to write a lot of emails at work, for instance, or you’re a freelancer writing about topics that don’t particularly engage you.

In these situations, it may not matter that your writing isn’t much fun: you might be perfectly content to do it for the paycheck. And that’s fine! (Though if you hate the writing you’re doing, then it’s probably time to start thinking about a change of career or at least a change of clients.)

If you’re working on a novel, or a collection of poems, however, or you’re writing short stories for competitions – you aren’t necessarily ever going to see any money for your efforts. While there will almost certainly be tough times during your writing, you want – overall! – to be enjoying the process.

What You Can Do to Make Writing Fun Again

#1: Take the Pressure Off

Are you rushing to meet an unrealistic deadline, like I was with NaNo? Some people find deadlines helpful and motivating – I’m one of them! – but trying to cram writing into an overpacked schedule isn’t much fun at all.

Fix it: Unless you really have to hit that deadline, could you push it back a bit? Even an extra couple of weeks might make all the difference to how you’re feeling.

Sometimes, if you feel that your writing is a chore or a bit pointless, it’s because there’s an issue with the thing you’re writing.

Maybe you’ve dashed forward with your novel without really thinking through the plot (which was part of my NaNo problem, too). Or maybe you’re plodding away with something even though you’ve lost interest in that particular idea.

Fix it: If you want to stick with your current project but it feels like it’s not coming together, sit down with a pen and notebook and do some brainstorming. What could you change? What new elements could you add in – or what could you take out?

#3: Give Yourself Permission to Write “Just For Fun”

How often do you write something purely for the sake of writing – to enjoy playing with words, creating characters, exploring an idea, or whatever it might be?

When life’s busy, I want all my writing to be adding up to something productive, like a finished blog post, or another chapter of my novel. It can be really difficult to allow myself to simply enjoy writing: to focus on the journey itself, not the destination.

Fix it: Can you give yourself a little bit of time to just have fun with your writing – even if it’s just five or ten minutes once a week? You might want to use writing prompts to get you going (I like the “take three nouns” writing prompt generator).

#4: Quit a Project That Isn’t Working

Sometimes, you try something out and … it doesn’t work.

Maybe you started a blog full of enthusiasm, then lost interest after a few weeks or months. (I had two blogs before Aliventures, on two very different topics, and abandoned both years ago.)

Or maybe you began a novel, enjoyed writing the first few chapters, but have now realised it really isn’t going anywhere.

Fix it: It’s OK to quit. In fact, it’s good to quit things that have served their purpose in your life. Perhaps those first 10,000 words of your novel were a crucial writing experience that you needed to go through in order to write something new and better. Maybe that failed blog gave you the skills you need to start a new, successful one.

With any writing project, big or small, it’s normal to go through some difficult patches.

But, most of the time, your writing should be something that you enjoy: something you look forward to, rather than yet another chore you want to cross off your list as soon as possible.

How could you bring the fun back into your writing this week?