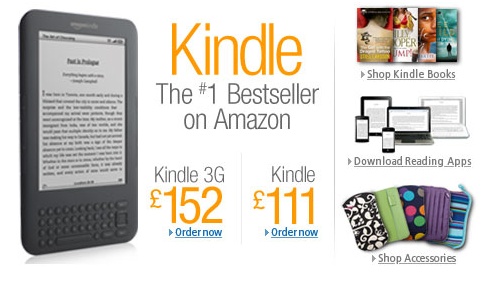 (A screenshot from Amazon.co.uk front page)

I’ve been hanging around in the writing world for twelve years, since I was fourteen. That’s when I bought my first book about writing, and when I first went to a writers’ group.

Lots of things which we pretty much take for granted now – like home broadband, blogs, Google and PayPal – were in their infancy.

The world has changed.

And that means that the nature of writing and publishing has changed too.

In all my time reading about writing and going to writers’ groups, self-publishing has been looked down on – either explicitly or implicitly.

I can see why.

Four years ago, I went to my first writing conference. I took a look at some of the self-published books on the bookstall. They had:

They didn’t look professional. And, judging by the content, they’d been self-published for a pretty obvious reason. They weren’t good enough for anyone but the author to think they were worth publishing.

I wish this wasn’t true, but it is.

Around the same time, I read the book Shadowmancer by G.P. Taylor (which was initially self-published, then taken up by a mainstream publisher).  It’s a good story – but it could’ve done with a lot more editing. There were clumsy passages of writing that any critique group would’ve picked up.

I realised that self-publishing had earned its stigma.

And I told myself that I wasn’t going to self-publish my work. Ever. Because, even if I managed to make it really good without the help of an agent or editor, it would be tarred with the same brush as all the crap out there.

I Self-Published My Ebooks and They Did Pretty Well, Thank You

In my little corner of the blogosphere, no-one talks about self-publishing. They don’t even necessarily talk about books.

They talk about information products and releasing and launching.

No-one, no-one, has ever told me that they weren’t going to buy one of the Blogger’s Guides because they were “self published” ebooks.

I’ve become an author, a publisher and a marketer. And you know what? It’s going pretty darn well for me. J

For months, since I finished my Masters in Creative Writing, and finished the third draft of my novel Lycopolis, I’ve been wondering what the heck to do with it.

Should I find an agent? (And was it all a waste of time if I don’t?) Or should I go it alone?

I’ve realised that a heck of a lot of authors are self-publishing their books, with some amazing results. With Kindle ebook sales overtaking print sales last year, ebooks have finally become mainstream. And on the Kindle, self-published authors are often outselling traditionally-published ones.

Two authors, Stephen Leather and Amanda Hocking, have made headlines in the last few weeks:

Amanda Hocking is a 26 year old author of young-adult paranormal novels. She’s got a fairly small online platform, and no experience of traditional publication. After publishing her first ebook last March she sold 164,000 ebooks by the end of 2010 – and 450,000 in January 2011 alone. (Read more in USA Today.)

Stephen Leather – an established, traditionally published author – caught my attention when I got my Kindle in December. He’s all over the Kindle Top 100 – and his books are amazingly cheap. I’d assumed this was some kind of publishers’ promotion, but no; he’s self-published these ebooks. He’s selling around 2,000 ebooks per day. (Read more in The Guardian)

The first-time novelists are doing it. Why? Because, as Jennifer Hudock points out, it gives them control over their work – and the stigma is slowly going.

The seasoned pros are doing it. Why? Because, as J.A. Konrath points out, they make much more money from their ebooks that way.

And why “indie” publishing? To emphasise the similarity to being an indie band or indie film-maker,  neither of which are seen as a bad thing.

(Sidenote: Just to add to the semantic confusion, “independent publisher” has traditionally been used for small publishing houses.)

My main introduction to indie publishing has been through Joanna Penn of The Creative Penn. I’ve been intrigued to see her launch her novel Pentecost, especially as:

In short, she did all the sorts of things that a “real” publisher would do.

She treated her work like a professional. She put her money on the line. She used her existing blog platform to launch her work.

If you’re going to be an indie publisher, that’s how it should be done.

Traditional vs Indie Publishing: The Scales are Balanced

Eleven years ago, it was obvious that self-publishing was a last-resort, to be considered only when you’d finished papering your garret with rejection letters.

In eleven years time, it might be obvious that indie publishing is the way to go – especially for authors who’ve build up a strong online audience, and who want full control over their projects. Plus, print on demand will probably keep getting cheaper, easier and more accessible.

Today, I think it’s pretty balanced. There are still many, many advantages to a traditional publishing deal, like:

On the other hand, publishing budgets are tight, and – in almost all cases – authors are very much expected to do their own promotion (with social media becoming more and more popular).

Indie publishing has a lot of advantages too:

Neither is better any more.

And in case you’re wondering, yes, I’m thinking about indie-publishing my novel. I’m going to be heading to some sessions at South by South West interactive on publishing-related topics, and I’ll be making a decision (and posting about it!) after that.

Whether you’re a writer or a reader, I’d love to hear your views on this post. Are indie publishers finally making self-publishing an acceptable choice? Would you buy an “indie” book or ebook?

The comments are open…