If You Don’t Get Published, Is Writing a Waste of Time? 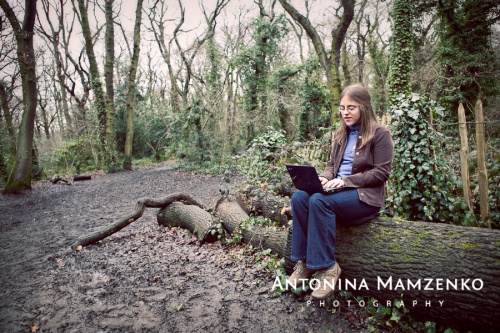 Like many photos on this site, this is with huge thanks to London lifestyle photographer Antonina Mamzenko.

If you’ve been reading Aliventures for … ooh, a couple of weeks … you’ll know that I finished a novel, Lycopolis, in 2011.

This novel represents hundreds of hours of work – possibly thousands. I put time into it. I put heart into it. I spent hours on scenes only to eventually cut them. I wrote and rewrote and rewrote until it was almost, almost the story I wanted to tell. (I had to let go of perfectionism in the end.)

I think it’s the best thing I’ve ever written.

And now I’m trying to find an agent.

It’s tough. I’ve barely begun looking, and I’m already feeling discouraged. There are so many aspiring novelists – and my novel isn’t an obvious genre blockbuster. I know that agents typically get hundreds of manuscripts every year and may only take on one or two.

Last week, I was telling Paul how frustrated I felt. “What was the point in spending two years of my life on this novel if it never gets published?”

Why didn’t I just stick to what I’m already good at – writing blog posts and ebooks? That’d be a far better way to reach out to the world. My novel’s been read by about five people, with maybe another dozen reading short excerpts. My blog posts get read by thousands.

Have I Just Wasted Two Years of My Life?

You might not rate your chances of success very highly.

Maybe, like me, you find yourself thinking I’ve wasted my time.

When I started my MA, I was working on short stories. Neat little short stories, sometimes with a carefully-plotted twist, which I felt confident about. I’d even won a couple of small competitions, and had a story published in a national magazine.

I was pretty good at these stories. But they weren’t a challenge. They weren’t the reason for doing an MA.

I wanted to find my writing voice. I wanted to get up the courage to tackle a story that was close to my heart, a story that had bubbled away for a couple of years. I’d not started on it at all, beyond a few tentative jottings in a notebook. It was going to be a big novel, with complexities that I didn’t know how to tackle.

In my first few weeks at Goldsmiths, I began writing that novel. I tried different ways to write the story-within-the-story element until I found something which worked for me and my readers.

I kept going. For two years, I kept going, finishing a first draft, then a second, then – last November – a third.

And then I emailed one agent, and felt disappointed that he didn’t email back.

“If it doesn’t get published, I’ve wasted my time. I’ve failed.”

What do you count as “failure”? For me, it all too often means not hitting some target that I’ve set, or not getting some external recognition – like a grade or a competition win.

Maybe, like me, you were used to getting straight As in school – the difference between success and failure seemed pretty clear. Or maybe you struggled academically – from childhood, you felt that you were a failure.

I’m starting to realise that failure isn’t really about not being up to some particular mark. Just as there are plenty of different definitions of success, there are different ways to look at failure.

When I went into that MA, I wanted to come out with a stronger writing voice. I fully believe I’ve done that. I saw my grades improve during the course, but more importantly, I could recognise the difference in my own writing.

Sure, I didn’t get it right first time. I reworked my assignments after feedback from fellow students and my tutors. I tried some things which just didn’t work. I showed work to agents, and they didn’t want to take me on.

What’s better – hitting easy goals every time, or stretching yourself further and further, learning and growing?

I’ve been given so much. I’ve got a loving family who continue to support me in so many ways (not least through giving us a great place to live). I’ve had great teachers. Words come easily to me. I’ve been labelled “bright” since I was a kid, and I’ve always believed it, and I’ve had a lot of confidence (and occasionally a bit of arrogance) about my own intellectual ability.

And there’s part of me which takes that for granted. Which wants to sit back, take the easy route, settle for quick wins and safe paths.

But that’s not only a fast-track to stagnation … it’s taking those gifts I’ve been given and throwing them away.

Lycopolis is the best thing I’ve ever written. It took a lot of work – frankly, far more work than I was initially prepared to put in. But as I went further and further, wrote more and more, revised, struggled, dreamt – I found that I was growing. I had more courage, more strength, more determination.

I know it might never be published. I know that my chances of getting an agent are, frankly, pretty slim. There are so many brilliant books out there, so many potentially great debut novelists.

But I’m going to give it my best shot. I’m not going to shrink back because I’m scared – of getting it wrong, of wasting my time. Because the more I put into this, the more I’m going to learn. And this isn’t the only novel I’ll ever write. Worst-case scenario … I’m just practicing for the next one.

Despite a few control-freak tendencies, I know that there’s a lot which I simply can’t determine. I can’t predict which agents will love my novel and which ones will turn it down with barely a second glance. I can’t make anyone publish it.

I can’t control the results I get.

What I can control is the effort that I put in. And it’s that effort, rather than hitting a particular marker, that’s going to help me continue to become more courageous, focused and determined.

Effort, not results, will make me a better writer. And, I hope, a better person.