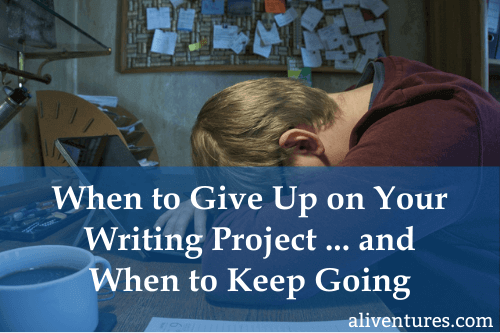 This post was originally published in January 2016 and updated in September 2020.

Have you ever given up on a big writing project part-way through – perhaps after months or years of work?

I’ve abandoned plenty (three novels and two blogs, at the last count). I’ve also stuck with others even when I thought of quitting.

If you’re currently struggling with a major project and trying to decide whether to give up or stick with it, here’s what to do.

This probably goes without saying … but don’t burn your novel manuscript and delete all the files or wipe your blog out altogether, however terrible it might seem might now.

If nothing else, you’ll want to look back in five or ten years and see how far you’ve come as a writer.

But there’s also the possibility that you’ll pick up the project at a later stage – perhaps when you’ve mastered new aspects of the craft and you can fulfil your vision for it.

So, hang on to what you’ve got, then decide whether you’re going to give up the project (at least for the foreseeable future) or plough on with it.

Ditch It When … You’ve Grown Too Much as a Writer

Some long projects span enough time that, during them, you change significantly as a writer – to the point where you realise that your initial idea was too small, too ambitious, or otherwise fatally flawed.

This is perhaps particularly the case if you get stuck into writing when you’re still fairly young. I wrote my first novel between the ages of 14 and 16, and by the time I’d finished the third draft, it was becoming clear that I needed to move onto something different in scope.

If something similar happens to you, please don’t have any regrets. All the words you wrote aren’t wasted in the slightest – they made you the (better) writer you’ve become.

Ditch It When … You Took on Something You Didn’t Love

If you want to write for money, by all means do: I’m a full time writer and I really enjoy it. But if you keep starting new projects with money alone in mind, that can be draining.

If you’re slogging away intermittently on a “for the money” project, maybe it’s time to ditch it for good and move on to something that fires you up instead.

The first couple of blogs I started didn’t get far. I learnt a lot from creating them and building an audience, but the topics were ones I’d chosen mainly with the hope of making some money someday. The same goes for a bunch of short stories that I wrote with the aim of furthering my writing career, rather than as an end in themselves.

If the thought of writing the next chapter of your novel or the next post for your blog fills you with dread rather than excitement, it’s time to move on. What do you really want to write?

Stick With It When … You Doubt Yourself

Of course, writing what you love brings up its own set of problems. Perhaps you’re riddled with self-doubt: you might be having a blast writing, but what if no-one wants to read your finished novel?

I’ve only rarely met writers who were full of confidence about their skills, and they tended to be (to put it mildly) a little self-deluded. Most writers go through at least occasional periods of doubt, and can easily fall prey to impostor syndrome.

Perhaps you have a little voice in your head telling you, “Who are you to be a writer? Who’d want to read that? You’re wasting your time. You’re never going to be any good.” That voice is lying. The best way to shut it up is to ignore it and carry on writing – that way, you can prove it wrong.

Stick With It When … It Just Isn’t Coming Together

This goes hand-in-hand with self-doubt: sometimes, what you’re writing just doesn’t seem to be working. Maybe there’s a huge plot hole in the middle of your novel, or the characters you can almost hear talking in your head seem flat and lifeless on the page.

If you’re a blogger, perhaps you’re struggling to gain any traction: no-one seems to be reading, and you feel like you’re pouring your words out into a vacuum.

I often find that the “aha” moment comes after a fair chunk of head-scratching and trying different things and seemingly wasting time. By all means take a break from your work-in-progress – but don’t ditch it completely just because you’re temporarily stuck.

Stick With It When … It’s Taking Too Long

Sometimes, life gets in the way of writing (and I think a lot of us have experienced that in 2020). Whether it’s a busy day job, caring responsibilities, young children, or a health condition, you might have something in your life that’s making it difficult to carve out much time at all for writing.

I know how hard it can be as a writer when you have very little time for your big project. It is tough to keep up the energy and momentum when life is hectic, and it’s easy to get discouraged when work proceeds at a snail’s pace.

But that’s not a reason to give up.

Novels take a long time to write – not just to draft, but to revise and edit. Sure, some writers finish a whole draft during NaNoWriMo each November – but they might then easily spend another 11 months getting it into shape.

Blogs take a long time to build – if you see a blogger achieve seemingly overnight success, that’s probably because they have a string of failed blogs to their name, and a ton of lessons learned.

Ten years from now, you’ll look back on what you’ve achieved (or not). Even if progress feels frustratingly slow, it can and will add up over time.

Over the past few years, I’ve been learning to trust my gut more when I decide whether to say “yes” or “no” to an opportunity or request.

If I get a sinking feeling as soon as someone asks me, “Ali, could you…” then I should trust that, and say “no”. I have never ignored that feeling, said “yes”, and been glad about it!

What’s your gut telling you about your work-in-progress?

If you decided to give up, right now, would you feel deeply relieved … or would you really miss working on it?

A while ago, K.M. Weiland wrote very openly and honestly about giving up on one of her novels – a couple of years of work. In it, she says:

The gut knows. There were times when I would have loved to have just thrown up my hands and quit on Dreamlander. But something kept me going. Every time I considered stopping, my instincts started howling. Keep going! You can fix this story! You have to see this through!

On the other hand, when I made the decision to put The Deepest Breath away for good, the loudest response I got from my gut was a big sigh of relief.

– K.M. Weiland, 3 Signs You Should Give Up On Your Story, Helping Writers Become Authors

Sometimes, you need to trust that gut reaction. When I’m still dithering, I flip a coin and see whether I’m happy or not with the outcome … and if I’m not happy, I go with the option I’ve just realised I’d prefer.

If you’re still not sure, try giving yourself a break from your project. Take 3 months or 6 months off, deliberately, and see whether or not you miss it. If you do, you can start working on it again; if not, then perhaps it’s time to let it go.