Why Repetition Can Be Powerful … and How to Get it Right 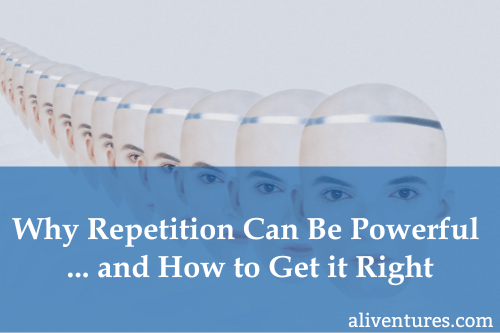 Is it ever okay to repeat the same word or phrase in your writing?

Unintentional repetition is something that authors are (quite rightly) warned to watch out for, particularly in fiction. And that may have given you the idea that you shouldn’t repeat words or phrases at all.

Intentional repetition, however, is a powerful tool: it can be used to make your points more memorable in non-fiction or to emphasise a particular motif in fiction. (You can probably think of plenty of poems, or even children’s books, that use repetition.)

Like most authors, I have a tendency to fall back on the same words or phrase a little too frequently … without really noticing. My editor, Lorna Fergusson from Fictionfire, is great at picking these up for me.

When you’re editing your own work, or reading a piece for another writer, look out for the same word being used too often within a short passage of text.

John stormed back into the room. “Back off!” he yelled.

Steven was taken aback; he’d thought the argument was over. He backed away.

The problem here is that the repetition and near-repetition of “back” isn’t creating a meaningful effect. Instead, it starts to jar; it feels almost comical.

Note too that the word “back” isn’t being used with quite the same sense each time: this can make it hard to spot repetition when you’re drafting.

Unintentional repetition is, thankfully, one of the easier writing issues to fix. Here’s a rewrite of the same passage:

John stormed back into the room. “Just leave it!” he yelled.

Steven was taken by surprise; he’d thought the argument was over. He edged away.

On a larger scale, it can be tricky to see when the same words or phrases recur a bit too often, especially in your own work. A useful trick here is, when you think you have one, to run a find and replace in your manuscript to see how often it comes up (and potentially to highlight each occurrence).

So how do you get repetition right?

It’s easy to see repetition at work when a fair proportion of the overall text is repeated: in a children’s book, for instance.

If you know The Gruffalo by Julia Donaldson, you’ll probably remember some of the key repeated sections, like this, which comes up three times unaltered:

Or in We’re Going on a Bear Hunt by Michael Rosen, each part of the bear hunt begins like this:

We’re going on a bear hunt.

We’re going to catch a big one.

What a beautiful day!

This sort of repetition would be too much for older children or adults, but you might be able to use repetition on a different scale in your work. That could be:

Use the Rule of Three

Think of all the fairytales you know that involve three: The Three Little Pigs, The Three Billy Goats Gruff, Goldilocks and the Three Bears … the number three works very well when you’re repeating something.

Three allows you to establish a pattern then break it for effect. In all of those stories, you have the set up of “normal” with the first two instances of something, then the surprise twist with the third.

Three feels complete. In The Gruffalo, there are three encounters between the mouse and large animals – a fox, owl and snake – and each of these proceeds in exactly the same way. (The surprise twist comes halfway through the book.)

Three is also memorable. (Think “stop, drop, and roll” or “reduce, reuse, recycle”.) If you want people to remember what you’re telling them, then coming up with three key points will work a lot better than five.

Here’s one classic example: you can find plenty more – and more about the rule of three – here.

Simply being deliberate isn’t enough to make repetition work. The repetition should matter.

In a poem or children’s story, it might give structure to the piece – or build a sense of anticipation.

In non-fiction, repetition is generally used to help make key points stick in the reader’s mind.

In a novel, it might be used to help link two scenes, potentially to create a sense of contrast or even humour.

Repetition could also be significant for the plot. For instance, if you’re writing a novel where a particular phrase has been repeatedly associated with the antagonist, and that phrase comes up in a letter purporting to be from a different character, it could be a clue to the reader (and the protagonist) that something’s amiss.

With the next book you read, whether it’s a novel trilogy (there’s that rule of three again…) or a children’s book, watch out for repetition. How’s it being used? Is it effective? Think about how you might use repetition in your own work – in large and small ways – to add extra depth or make it more memorable. 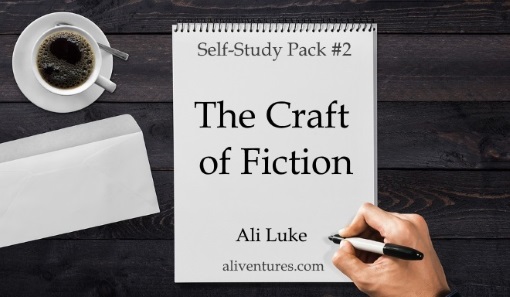 For lots more tips on writing great fiction, check out my Craft of Fiction self-study pack. It includes seminars on dialogue, flashbacks, scene structure,  and descriptions, all with lots of practical tips.

The Craft of Fiction costs $20, which gives you unlimited access to all four seminars, plus nicely-edited transcripts and worksheets. It’s part of a series of six self-study packs, and you can get all of them (that’s 24 seminars in total!) for just $50. Just click here to get all the details of what’s included in each.