Can You Edit Something You’ve Already Published? 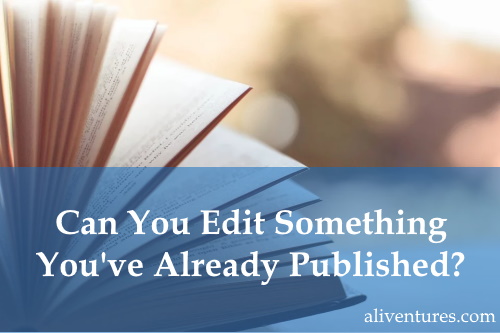 We’ve been looking at the importance of editing over the past few weeks and, so far, we’ve only been considering editing your work before publication.

It’s also possible – increasingly so in the age of self-publishing and digital publishing – to edit your work after publication.

While this is more common with some type of writing than others (non-fiction books on technical topics, for instance, very frequently get new editions), it’s possible for most types of writing.

It’s also nothing especially new, even if you’re a novelist: writers have been editing their work long after publishing it for centuries. Fifteen years ago, when I was an undergraduate student, I studied Samual Richardson’s novel Clarissa. It exists in several different editions, the final revision being more than a decade after the original was published in 1747-8. (Richardson was a printer by trade, which probably made repeatedly editing and republishing his work easier!)

Today, self-publishing authors sometimes edit and republish their novels (particularly early works that may not have been up to the standard of later ones), bloggers frequently revisit and edit posts that have become dated, non-fiction authors put out new editions of their books, and so on: David Gaugran’s Let’s Get Digital is on its third edition, for instance.

If you’re traditionally published, it’s going to be a lot trickier to edit your published work. I would have quite liked to update my book Publishing eBooks For Dummies, which came out back in 2011 – eight years is a lifetime in self-publishing! Sadly, the ongoing sales didn’t justify the costs for the publisher of creating of a new edition.

Assuming that you do have the ability to edit your work and republish it, though, why might you do so?

#1: Sales Have Dwindled (or Never Took Off)

If your book never sold as well as you wanted, then it might be worth taking a hard look at whether it needs a bit more editing. A lack of sales could be down to the price or book description, so it’s worth experimenting with those first (as they’re the easiest thing to change) – you might also want to explore getting a new cover.

After you’ve made (or at least considered!) those changes, though, it might be time to edit the book itself. This is particularly true if you’ve had reader feedback suggesting that your writing wasn’t quite there yet – e.g. if you’ve got quite a few low to middling reviews that point out specific flaws. Don’t revise your whole book based on a single one-star review, though: you can’t please all of the readers all of the time!

#2: The Information (in Non-Fiction) or References (in Fiction) Have Dated Quickly

When you’re writing about something that changes fast, like technology, a book or article that was totally up-to-date on the day of publication could be out of date within weeks or even days. Sometimes, you might write about a piece of software or feature that disappears entirely. As a freelancer, I’ve written a lot about blogging and social media over the years, and I vividly remember writing content about Google Authorship for one of my clients back in 2013 – a feature that showed author’s names and photos alongside their articles in search results. A year later, in 2014, Google stopped using it.

With fiction, you might find that a novel you wrote a couple of years ago now seems very dated due to technology or political changes. While this isn’t necessarily a problem – all contemporary fiction will become a period piece eventually! – it might well sway you towards editing and republishing in conjunction with other reasons.

#3: You’ve Grown as a Writer – and You Can See the Flaws in Your Work

Do you ever look back on your writing from a few years ago and cringe? Some bloggers update their earlier posts simply because they’ve become better at writing over the years and they don’t feel those pieces reflect as well on them as they’d like. The same applies with non-fiction and fiction too.

I’m currently thinking about radically overhauling my Lycopolis trilogy in the future, particularly the first book. While I did the very best job I could at the time (and my lovely editor helped me hugely), I can look back on it now and see things that didn’t quite work – particularly as I’d originally envisaged it as a stand-alone book but then decided to self-publish and write a trilogy. Which brings me on to…

#4: You Want to Turn a Stand-Alone Article or Book into a Series

Sometimes, you might publish a piece that’s complete in itself … only to later realise that you want it to form part of a series. This doesn’t necessarily need to require rewriting (I turned my posts on writing dialogue into a sort-of series by simply creating this post that linked to all of them) – but in some cases, it’ll make sense to rework the first piece in the series to allow more scope for the others.

While there’s no requirement that what you write should form a series, a lot of self-publishing authors are finding that series (of three or more books) are a good way to get readers to buy more than one book. They also lend themselves to “boxsets”, where you group several books into one – for a good example of this, check out J.F. Penn’s  London Crime and ARKANE series.

#5: Feedback and Reviews Have Highlighted Some Flaws

However much editing you do, and however many beta readers or editors you have, your published work is never going to be perfect. That’s not necessarily a problem at all: there are hundreds of books I’ve enjoyed, even loved, despite them having definite flaws.

However, if you feel that the feedback you’ve had suggests there’s still quite a bit of improvement that could be made, then that can be a good reason to revisit a past work. This is especially true if all the criticism is around one general area (e.g. that the first third of your novel is too slow-paced, or that your non-fiction book needs more concrete examples).

All of the above are perfectly good reasons to want to update something you’ve already published – and if several of those reasons apply to you, then it may well make sense to go back and make some changes.

However, you might also be tempted to edit a previously published work for the wrong reasons…

Some authors find it really hard to finish their work and move on. Maybe they write sequel after sequel, spinning out a great trilogy into a series that’s dying a slow death. Or maybe they keep tinkering with their work for years before even publishing it – and once they finally do take the plunge, they want to keep going back to it again.

While it’s perfectly normal to be attached to your work, there comes a point where you need to let go and move on. However engrossing your characters and world-building are in a novel, or however useful and insightful your non-fiction book is, you don’t want it to be the only thing you ever write.

#2: You Aren’t Working on Anything New

This goes alongside struggling to let go – because it can be very hard to disengage from a project when you don’t have anything else to move on to. While you definitely don’t need to jump straight into a new book the day after you’ve published the previous one, you don’t want to leave a huge gap between projects.

If you’re struggling for ideas, give yourself plenty of space (and creative input) and trust that something will come. If you’re struggling with the urge to get your previous book or work “right” before moving on, remind yourself that you’ll have plenty of opportunities to come back and edit in the future – and that you’ll have learnt more by that point, from working on new projects.

So … yes, you can absolutely edit something you’ve already published. I do this frequently with blog posts, and I’ve done it with non-fiction ebooks and courses that I’ve published; it’s also something I’m strongly thinking of for my fiction in the future, though not until I’ve got some new novels written and out there.

I’d love to hear your take on this. Would you ever edit your work after publishing it? Tell us a bit about your projects – and about why you might choose to edit them – in the comments below. 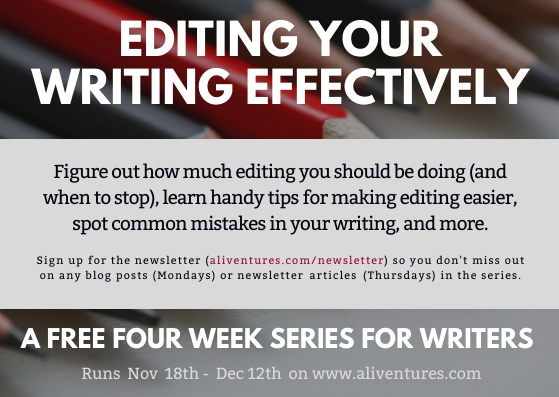 In Thursday’s newsletter, we’ll be looking at a fiction-specific editing issue: dialogue tags. Remember to sign up for the newsletter so you don’t miss that.