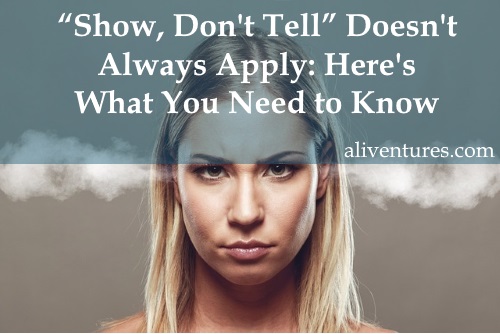 However … it’s not a rule you need to stick to all of the time.

Plus, even when “show, don’t tell” does apply, it can be tricky to be sure exactly what’s meant by it. Where’s the line between “telling” and “showing”?

Here are a couple of examples:

Michael was angry with Sarah, and sulked all day.

Sarah asked, tentatively, “Shall we get a Chinese or Mexican tonight?”

“Do whatever you want,” Michael said, “like you always do.”

He stamped off up the stairs, and didn’t speak to her for the rest of the afternoon.

The second example is much more vivid. We see how Michael behaves when he’s angry; we hear the characters speak to one another.

It’s also much longer – and this is often the case for showing versus telling. Sometimes, you can show readers something with a single well-chosen detail – but often you’ll need to expand a highly condensed bit of “telling” into more of a scene.

When You Should Tell, Not Show

All stories will involve some degree of “telling” … and there’s not always a clear dividing line between “telling” and “showing”.

For instance, here’s a line from the opening of Charlotte Perkins Gilman’s “The Yellow Wallpaper”:

John is practical in the extreme. He has no patience with faith, an intense horror of superstition, and he scoffs openly at any talk of things not to be felt and seen and put down in figures.

The (unnamed) narrator is telling us about John, rather than showing us what he’s like (though we quickly do see him in action). But through this telling, we are also shown something of the narrator – how, perhaps, she is someone who does not consider herself “practical in the extreme”, and who might have more time for faith and superstition and the non-material world than her husband does.

There are certain times when you’ll definitely want to use “telling”. For instance:

What if You Do Have Too Much Telling?

If you feel that you do tend to tell the reader too much when you should be showing them, think about how you could dramatise or demonstrate what you want to tell us.

For instance, if a character is excited, you might show us how they behave. Do they speak more quickly or loudly than usual? Do they clap their hands in glee? Do they jump up and down?

Any time you have reported dialogue – a common type of telling – ask yourself whether it would be better if you showed the conversation taking place. Sometimes, it wouldn’t: the conversation is boring or relatively unimportant to the story (probably, the outcome is the only thing that matters).

When you’re reading, you can also keep an eye out for times where authors show something rather than simply telling you.

Here are a couple of paragraphs from the prologue of Stuart Neville’s Those We Left Behind that demonstrate how showing can be used to effectively and fairly quickly cue the reader in:

The mattress rocks. Warm air finds the tiny hairs on the back of Ciaran’s neck and waves them like the grass on the dunes, back when they were little, and things weren’t so hard and angry. A bare arm slips around his waist, the hand taking his. The chest against his back, all warm and cuddly, bony knees tucked behind his.

Ciaran sees the red points of blood on their wrists. Join the dots. Make a picture.

We don’t need to be told that Ciaran is young and vulnerable. We get this through words like “cuddly” and “join the dots” and “make a picture”. (We later learn that he’s 12, at the time of the prologue.)

We also don’t need to be explicitly told that there’s someone else lying on the bed with him. We see the bare arm slip around his waist, the chest and knees against his back, and we have the reference to “their wrists”.

How do you feel about “show, don’t tell”? Is it a rule you’ve found useful – or one that you think is too prescriptive? I’d love to hear your perspective in the comments.