How Do You Divide Your Novel into Chapters? 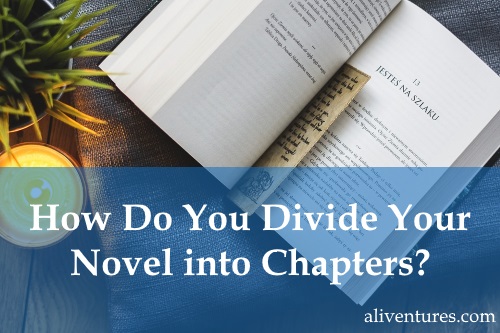 This post was inspired by an email conversation with Emma from the brilliant blog Science at Your Doorstep and by a question from an Aliventures reader. It was first published in April 2018 and updated in October 2021.

Pick up the nearest book. Whether it’s fiction or non-fiction, it’s almost certainly split into chapters.

As readers, we take that for granted. Chapters give us an easy way to discuss where we’ve got to in a new book (“I’m on Chapter 10 now…”) – and provide handy stopping points in the text where we can put the book down.

As writers, though, chapters can be surprisingly tricky.

How many should you have? How long should they be? Do you even need chapters at all?

Chapters, Parts, or … Nothing?

If you’re writing a novel or novella, you’ve got a fair few options for how you divide your text into pieces. You could have:

Option #1 is standard, ordinary, and familiar to all readers. Whatever genre you’re writing in, dividing your work into chapters is highly unlikely to be surprising or controversial.

Option #3 is unusual and tends to be a self-consciously literary option. That doesn’t mean there’s anything wrong with it, but it’s not likely to be a great approach if you’re writing in a commercial genre where readers expect chapters.

Option #4 was common in the early life of the novel (Dickens was serialised, mainly in stand-alone monthly parts; my favourite 18th century novel, Samuel Richardson’s Clarissa, is absolutely massive and was originally published in seven volumes between 1747-48 at different times).

But today, with, digital publishing, we’re seeing a resurgence in this type of serialised novel-length work: some ebooks are published as short “episodes” that are then collated into “box sets”, and fanfiction – on major archives, at least – tends to be published in “chapters”, though these may be tens of thousands of words long.

If you’re unsure what you should go for, I’d suggest looking at books in your genre. (If you’re writing cross-genre or something that isn’t easily pigeon-holed, find books that are at least vaguely similar.) See what they do.

Do Your Chapters Need to Be the Same Length?

I’m going to tackle this before we look at the question of where to end your chapters, because it tends to worry authors unnecessarily.

Your chapters do not need to all be the same length.

You can have one chapter of 2,000 words and another of 5,000 words. There’s no rule against it, and readers may not even notice, let alone mind.

What I would suggest is having a roughly “standard” chapter length in mind (mine tend to be around 1,500 – 2,000 words); if a chapter is significantly shorter or longer than standard, you might want to double-check that the pacing doesn’t feel off.

Generally, though, writers worry far more about consistent chapter lengths than readers ever will! What matters is that you tell your story at the right pace and in the right way. I’ve never, in years of reading books, discussing books and reading reviews, seen a reader complain that one chapter was only 5 pages and the next was 10.

Where Should You End a Chapter?

It’s entirely up to you!

As K.M. Weiland points out, a scene is a crucial structural unit – but a chapter can end (pretty much) wherever you want.

Here are a few things to think about:

If a chapter feels like it’s dragging on and on, then your problem might be with the narrative itself rather than your division of it. Maybe you’re giving too much detail (and it would be better just to end the chapter at a high point and leave the rest to our imagination), or maybe something needs tweaking slightly in the plot.

When I’m drafting, I tend to simply end chapters wherever it feels natural to do so. In the redraft, I often end up trimming and combining chapters (particularly early in the novel) that didn’t quite work – the important thing during the draft is just to keep moving forward.

How Should You Name Chapters?

Some books start each chapter with “Chapter 1”, “Chapter 2”, etc.

Others have a symbol or a character’s name, if the novel alternates between two different points of view.

Some (particularly children’s books and humourous fantasy) have titles for each chapter – e.g. the first chapter of Harry Potter is titled “The Boy Who Lived”.

Whatever option you go for, be consistent. You might have an occasional chapter that’s named differently (“Prologue” and “Epilogue” are the obvious ones; I’ve also seen – and used – “Interlude” in the middle of a novel).

When you edit, make sure you haven’t missed off a chapter number altogether, repeated a number, or skipped a number. This tends to happen to me when I’m shifting material around a lot as I redraft – thankfully my editor is great at picking up on it.

How Many Chapters Should You Have?

The number of chapters you have is, obviously, going to depend on the length of your chapters. If you want short chapters, you’re going to end up having quite a lot of them.

There’s no right or wrong answer when it comes to the number of chapters in your book. I’d recommend looking at other similar books (the same genre of fiction, or the same type of non-fiction) to see how many chapters they tend to have.

You don’t need to go out and buy or borrow a lot of books to do this: just use Amazon’s “look inside” feature, which will normally show the list of chapters for a book. You can also get a free sample of the book if it’s available on Kindle.

In general, full length novels will normally have somewhere between 10 and 40 chapters, but they can have far more. Richard Osman’s recent hit The Thursday Murder Club had 115 chapters, many of them quite short.

Ultimately, the number of chapters you have doesn’t really matter: what’s important is that you use chapter divisions effectively in your book, whether it’s fiction or non-fiction.

Want some help with issues like viewpoint and novel structure?

Check out my self-study packs, particularly the Advanced Fiction Pack (#5) and the Novel Editing Pack (#6).

Each pack costs just $20 and includes four full seminars (audio or video) plus nicely edited transcripts. You also get a worksheet summarising each seminar.

You can also get all six self-study packs for just $50. Find out about all of them here.