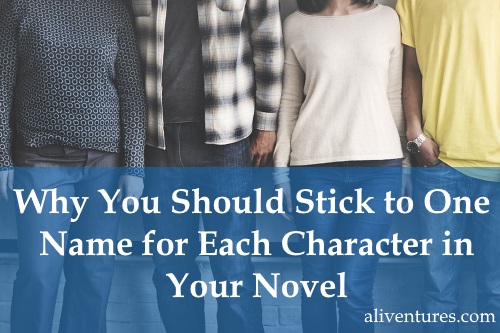 You’re probably known by several different names in your life.

I’m “Alison Luke” when I fill in a form.

I’m “Mrs Luke” to my bank and to cold-callers.

I’m “Mummy” to my kids, occasionally “Mum” (they’re not convinced that I even have another name).

I’m “Ali” to everyone who met me after I turned 18, and “Alison” to some of those who met me before that and never adjusted!

I’m “Kitty’s mum” to a lot of my fellow school mums.

Like real people, your characters will almost certainly have more than one form of their name. They might also have a particular role or profession (e.g. “solicitor”) that you could plausibly “name” them as.

When it comes to your narrative, though, your character needs to have one name that you use consistently.

It’s confusing for readers if you switch between their surname and first name a lot, or if you use descriptions to try to shake things up a bit (“the girl”, “the tall man” “his friend”, “the cop” etc).

Using a character’s name repeatedly is like using the word “said” repeatedly: readers will barely even notice.

Why Switching Up Your Character Naming Doesn’t Work

As Susie watched, Jason took a bottle of wine from the fridge and poured two glasses.

Her friend hadn’t even asked if she wanted something else instead. Surely Williamson knew by now that she very rarely drank.

Even if we already know that Jason is (a) tall, (b) Susie’s friend and (c) has the surname “Williamson”, it’s still a bit jarring to have him referred to in all these different ways in such a short space of time. It’s also confusing when she suddenly switches from “Susie” to “Susannah”.

Obviously, you should use pronouns (“he” / “she” / “they”) where appropriate; do use names if there’s the potential for confusion, though, or if you’re resuming after a break within / after a chapter.

Some writers, especially newer writers, think that it’s important to avoid over-using a character’s name. Instead of using the name, they write something like:

Generally, you should avoid this.

Why? It’s distancing. It positions the narrative further away from the character and can make the character seem less of a person and more of an archetype or depersonalised figure. (You may of course want this, which we’ll come onto in a moment…)

(For more on this, check out K.M. Weiland’s excellent post Most Common Writing Mistakes, Pt. 39: Referencing Characters by Title Rather Than Name.)

It can also be confusing to the reader if you use this type of descriptor. They have to stop for a moment and work out whether “the tall man” is definitely the same person as “Jason”.

Of course, there may well be times when you want to use a nickname, or more formal name, or a distancing reference to a character.

This is always OK in dialogue – and, of course, the names we use for people can be significant. (My children only ever get called by their “long” names when they’re in trouble…!)

Within the narrative, though, it’s sometimes appropriate to use something other than the character’s name.

Sometimes, you might have a good reason to use variant on a character’s name (e.g. a shortened form of their name). The main reason for this is when:

Do you name your characters consistently in your narrative? If this isn’t something you’ve consciously thought about before, you might want to read back over a few pages or chapters to see whether you want to make any changes.

I’d love to hear your thoughts about character names – and whether you think consistency matters here! – in the comments, too.