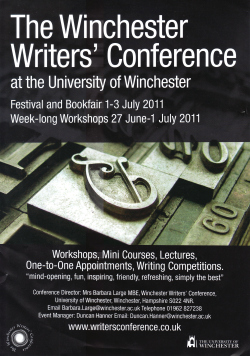 As you might have seen in my last post, or on Twitter (I’m @aliventures), I was away last weekend at the annual Winchester Writers’ Conference here in the UK. Run by the energetic, lovely and irrepressible Barbara Large, it’s a great festival of all things writing-related.

So … I figured you’d like to hear about what I learned.

I’m going to start with characters:

On the Friday, Lorna delivered a whole mini-course on building characters, and gave tons of specific advice, tips and exercises.

I have eighteen pages of notes from this course (!) so I’ll focus on just a few of the key points that I took away:

Lorna is a fantastic teacher and writer, and if you’re in the UK, I highly recommend trying to attend one of her day courses in Oxford – you can get details on her website, fictionfire. She blogs at literascribe and you can find her on Twitter as @LornaFergusson.

I’ve come across this exercise before, and it’s a great one for getting started on a piece of fiction. Lorna took us through it in the class (and it was fun to hear what objects other people had been given, and what they came up with!)

Write lots of different objects onto a sheet of paper: they can be completely mundane, or unusual. Cut it into slips and pick three at random. Write about a character who has all three objects.

When Lorna handed out her slips of paper, I ended up with “keyring”, “timetable” and “thong”… no, I won’t share the resulting story with you. 😉

If you want to try this exercise, here’s a list of objects that I’ve come up with:

One of the (many!) things that I love about Lorna is that she produces comprehensive handouts for her courses. She gave us two pages of fantastic quotes about characters. I particularly loved these two, debunking the myth that characters “run away” from their authors:

The legend that characters run away from their authors … implies that the writer is a fool with no knowledge or mastery of his craft. … the idea of authors running around helplessly behind their cretinous inventions is contemptible. (John Cheever)

My characters run away but not far. (Bernard Malamud)

(For full effect on the second one, read it in a kinda sinister tone…)

Lorna mentioned a couple of books, and a web page:

The Book of Tells (Amazon.com / Amazon.co.uk), by Peter Collett

This is a guide to body language – how we express ourselves physically. It looks like a fascinating book for anyone interested in deeper characterisation, and I’ve ordered a copy from Amazon.

I’ve heard this book recommended multiple times, so I’ve ordered this one too. It breaks down stories into key elements, and characters into key archetypes. (Note that several reviews mention the small print of the current UK edition – you may want to go for an older, second-hand version.)

This series, from The Independent, goes through a bunch of favourite characters. I’m particularly pleased to see that my personal favourite makes the list:

Thomas Harris’s Hannibal Lecter has exquisite taste, is well read, surrounds himself with utter beauty and is the meanest killing machine on the face of the literary earth. I wouldn’t mind him eating my kidneys as long as he fed me an excellent bottle of red wine beforehand. (Pauline McLynn, comedian and author)

Hope that provides plenty to think about! If you’ve got any questions about creating and depicting characters, pop a comment below and I’ll do my best to answer. 🙂

In my next post, I’ll be going through some more great advice gleaned from the Winchester Writer’s Conference: make sure you grab the RSS feed or pop your email address in the box below to have my posts sent straight to your inbox: