Unreliable Narrators: What Are They and Why Might You Want to Use One? 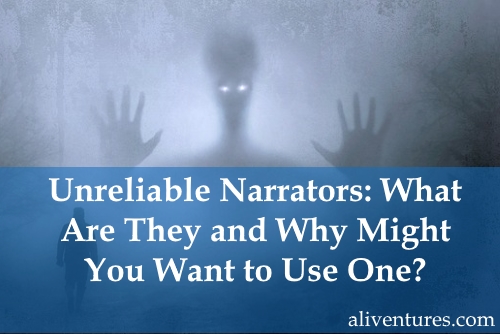 An unreliable narrator is a first person narrator who doesn’t entirely tell the truth.

We could argue that all narrators are at least a little unreliable: we expect them to show some degree of bias, and we expect their narrative to be clouded at least slightly by their own preconceptions. As readers, we filter these without really thinking about them to come up with a more objective truth.

But to be a true “unreliable narrator”, the narrator needs to be going further than this in omitting facts, or manipulating them, to put a very different light on events.

An unreliable narrator can serve a number of different purposes within a story. You might use one because:

Often, with an unreliable narrator, the story will be presented as if it’s being told to someone – perhaps an interviewer or therapist – or as if it’s being written down, maybe as a diary or journal.

In Jeff VanderMeer’s Annihilation, for instance, the unnamed narrator is keeping an expedition journal, designed to be read by others. There are several points at which she admits she hasn’t been entirely truthful or open about something before that point (e.g. when we find out about her husband’s connection to her mission).

How to Play Fair When You’re Using an Unreliable Narrator

There’s technically nothing stopping you from writing a first person narrative, only to have your narrator reveal in the final chapter that the entire thing was an elaborate fabrication, that most of the characters don’t even exist, and that their real story is very different.

This is unlikely to be a satisfying experience for the reader!

Part of the appeal of an unreliable narrator is knowing – or at least suspecting – that they’re unreliable, as you read the story.

This means cluing the reader in at a fairly early stage. That might be by:

Keep in mind that the format of your story may also influence how many clues you need to include. If the story is being presented as a straightforward narrative, not “told” to anyone in particular, then we don’t necessarily expect any lies; if the story is presented as a series of letters sent from a character in jail to a journalist on the outside, we might be more dubious about his protestations of innocence.

Unreliable narrators can be really fun for both writers and readers – but if they’re done badly, they won’t work. How do you feel about unreliable narrators?Is there a particular novel or short story you’ve read that makes great use of them? Share your thoughts in the comments below.