Is it OK to Use Swear Words in Your Writing? 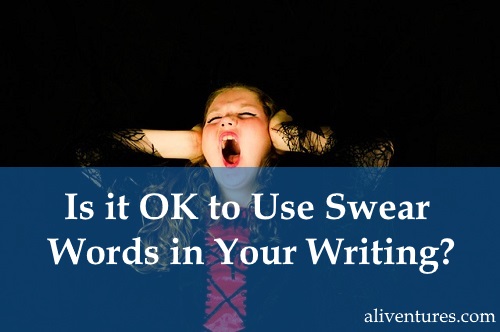 Swearing. Cussing. Strong / bad / foul language. Whatever you want to call it … can you use it in your writing?

It’s your writing, and you can do whatever you want!

Of course, there are reasons you might decide against swearing, or reasons why you might moderate your language in different contexts.

Here are a few things to consider.

What Will Your Audience Expect?

Do your readers swear – and do they expect to see swearing coming from you?

Sometimes, subverting expectations can work very well, particularly if you want to make people laugh. For instance, you might use some very strong language on a blog about parenting toddlers and it could be hilarious! Or you might juxtapose strong language with cutesy images.

If it works for you, go for it.

Sometimes, though, going against people’s expectations can really backfire. Maybe you’ve branded yourself as a consummate professional and you have a fairly conservative client base … if you suddenly start tweeting (or even retweeting) posts that include bad language, you could get a strong backlash.

Are You Writing Fiction or Non-Fiction?

If you’re a fiction author, then I think most readers will accept swearing (certainly in dialogue). Sometimes, you’ll have scenes where it would seem downright weird for character not to swear.

Of course, this still depends on your audience. If you’re writing conventional romance, for instance, readers might be really put off by anything more than quite mild curses. They may also have expectations about the types of characters who’ll swear – perhaps minor characters or villains can get away with it, but your heroine won’t be expected to come out with that sort of language.

In non-fiction, swearing can come across as rather gratuitous. This isn’t necessarily a terrible thing, and it may still work as part of your brand. On the other hand, strong language can be a good way to make a forceful point (especially if you don’t use it often) and it may surprise readers out of complacency.

How Do You Feel as a Writer?

Whatever you write, you’ll probably have a certain comfort level around swearing. Maybe you never swear and “gosh” is about as strong as your language gets. Or maybe you swear cheerfully and happily as part of your normal vocabulary.

I never swore as a young teen, though a lot of classmates did. I’ve gotten a lot more relaxed about swearing over the years. I include bad language in my fiction where it’s appropriate for the characters and situation – usually I feel fine with that, though there are one or two words in my Lycopolis series I’d blush to read out loud!

Don’t feel pressured into using swear words, though, if you don’t feel comfortable with them. A couple of my favourite bloggers (Naomi Dunford and Tim Brownson) swear all the time, and that’s fine for me as a reader … but I don’t try to emulate them here on Aliventures!

Let’s get down to the nitty-gritty: how do you actually write swear words? This isn’t quite as simple as it might sound! (I’m assuming you know the spellings…)

There are four main options for this:

Personally, my preferences are #1 and #4. I think asterisks look mealy-mouthed – everyone knows the word so you might as well spell it out! – and symbols seem rather old fashioned and unnecessarily coy.

Using Option #1: If you’re going to swear, swear! If not, choose a word that you’re comfortable typing. Maybe “shit” is a bit strong for you, but you’re OK with “crap”.

Using Option #4: If you’re writing about characters who’d use strong language, but in a genre where that actual language would not be appropriate, X swore or X shouted a torrent of abuse or similar is – I think – a good option. You see this quite frequently in children’s literature (e.g. in the Harry Potter books, you’ll get lines like “Ron swore”). It could also be a good option if you’re writing, say, light romance or a story for a women’s magazine like People’s Friend.

Ultimately, as I said at the start, it’s your writing and your choice. I realise this is an issue some writers have quite strong opinions about … and I’d love to hear yours in the comments!