Three Ridiculous Moans from New Writers … and How I’d Respond 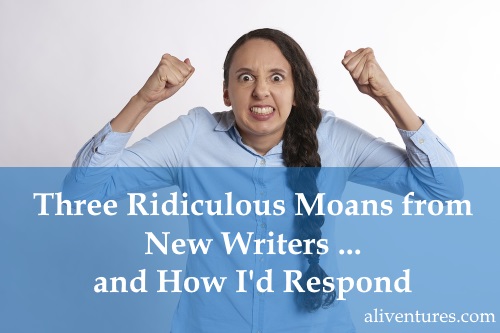 Most writers are reasonably pragmatic about the realities of writing. While they might daydream (secretly or not-so-secretly) about their talent being “discovered” by someone prominent in the writing industry … they know that’s not really going to happen.

Occasionally, though, I come across fairly new writers whose expectations are so far removed from reality that they’re genuinely unreasonable. I’ve seen these views expressed on blogs, on social media, and letters to magazines.

Three moans that I’ve seen come up again and again relate to:

Here they are … and here’s why I think they’re (at least somewhat) ridiculous.

Moan #1: “Agents Should Respond Quickly … and Read My Whole Submission!”

“I sent my manuscript to an agent three months ago and they still haven’t responded! It’s downright rude … and it seems to be typical. Perhaps agents should sign up to a code of conduct where they agree to read manuscripts within, say, eight weeks. It’s their job, after all! And they should read the WHOLE manuscript, not just the first page or two.”

(I can’t now lay my hands on the magazine where I saw a letter from an unpublished author suggesting agents should sign up to some sort of code about their response times … but it was such an outrageous suggestion that it’s stuck in my mind for years!)

Let’s take this in two parts.

Agents do not exist solely or even mainly to discover new talent. Their job is to represent their current “list” of authors. Their working day is spent making phone calls, sending emails, working with those authors on manuscript edits, and so on.

New manuscripts from unknown authors are, obviously enough, not a priority for them. For many agents, reading manuscripts is something they do as well as their day job, not during it: they might be sacrificing their evening or weekend to do so.

(For an excellent article covering this, see Harry Bingham’s Literary agents and the slushpile: slaying the myths.)

“… and they should read the whole manuscript.”

Some writers get very frustrated that agents will ask for, say, a synopsis and three chapters – but might only read a page, if that.

I can understand why this is frustrating: it feels like your work isn’t getting a fair chance. The truth is, though, that an agent (and indeed anyone experienced in the world of writing) can tell within a page – probably within a paragraph! – whether the writing is worth reading.

If you begin your story with a long, dull description of the weather and your synopsis is full of spelling mistakes, it’s going to be clear to the agent that it’s simply not worth reading more. And why should they? They don’t owe you anything!

Moan #2: “My Writing is Super Important and No-One GETS IT”

“I’ve been trying for years to make it as a writer. If only the people around me would actually support me! They simply don’t understand how important my writing is. My spouse thinks I’m just sitting at home staring out of the window and keeps asking me to help with the chores … but all that staring out of the window is a vital part of my creative process. And don’t get me started on my friends. Not one of them will proofread my 250,000 word novel for me!”

I agree writing is important. I also agree that daydreaming is an important part of the creative process (though I think it’s perfectly possible to daydream while also doing the dishes). It’s lovely when family and friends are supportive – but it is not their job to support your dream.

Most writers fully recognise this. If they feel the need for more support than they can easily get from their existing networks, they might join a writers’ group or take a course.

Some writers, though, seem to think the world should treat them as someone special – “A WRITER!” – even though they’ve never so much as had a short story published. They can be a bit unreasonably dramatic about what they “need” in order to write.

I’m sure I’ve had times when I’ve been a bit precious about my writing. There’s a fine line between recognising and acknowledging that your writing is important without expecting other people to go out of their way to support you.

As Mette Ivie Harrison puts it in Why Your Family Doesn’t Want You to Be a Writer,

You are not allowed to push off your responsibilities at home with the excuse that you are going to write. The dishes still have to be done, the laundry folded, the kids helped with homework or driven to activities.

Remember, ultimately, your writing goals are yours alone. If you need, say, some uninterrupted time to write, then by all means negotiate that with your family members – but be prepared to help them get time for their goals too.

This moan takes a number of forms. A couple that I’ve seen cropping up go something along these lines:

Most professionals (whether journalists, editors, freelancers, novelists, etc) are incredibly busy with their own work. Why should they review yours for free, or come and teach your group for free?

You might feel that you’re not asking a lot — e.g. “could you look over my short story” or “could you take a look at my blog and tell me what I’m doing wrong” — but they might get dozens of requests like that. (And even if they didn’t, there’s no reason why they should be obliged to help you.)

Asking an author to read your manuscript isn’t only a bit presumptuous, it also might not be that helpful. As literary agent Rachelle Gardner explains:

The problem with asking authors for feedback is that you put them in a no-win situation. They’re not in the business of assessing manuscript saleability, so they may love your book or they may hate it, but either way, they still might not have any idea whether it’s viable in today’s market.

Also, while someone might be kind enough to do you a favour, you certainly shouldn’t expect it of them. If you want feedback on your work, join a critique group when you help one another. If you want a professional to speak at your group or event, pay a reasonable fee! It’s not enough to say they can sell their books — they might have to prepare for an hour, travel for an hour, and attend your meeting for two hours … that’s four hours’ work for which they might be lucky to sell five books (netting them about a fiver, most likely).

You may also be wildly overestimating how much they earn from their books! Many published authors – even ones that sell quite well – still work a day job, or at the very least, only make a modest income from writing full-time.

I know it can be really frustrating when you’re at the early stages of your writing career and it feels like so many doors are closed to you. It’s completely understandable to wish that someone who’s “made it” would reach out and change your life.

But reasonable writers know this is a fantasy. And that’s, in many ways, a good thing! You don’t need to sit around waiting (im)patiently to be chosen … you can do a huge amount to help yourself.

For instance …. read writing blogs and get a good book or two on the craft of writing. Revise and edit your work to the best of your ability. Build your support network: join a local writers’ group or an online forum. Get feedback from your peers. Submit your work to competitions, magazines, editors, agents, whatever’s appropriate. Start a blog of your own. Look into self-publishing and see if that would be a good route for you.