Why Novel Series Are So Popular With Indie Authors … and Readers 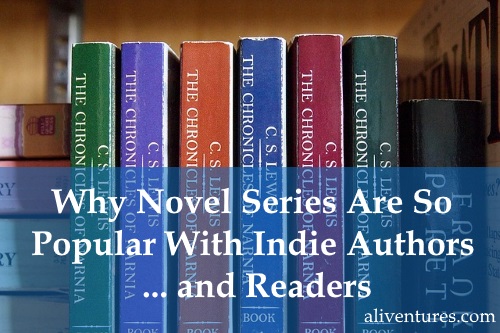 Book series – whether trilogies or longer – have been around for a good long while.

They’re especially popular, though, with indie authors (who self-publish their own work), and over the past few years, I’ve seen lots of great indie authors focusing or coming to series writing.

So why are series so popular?

For the sake of this post, I’m going to count a “series” as two or more linked books. It might be:

A series doesn’t have to be made up of full-length novels, either. Some authors do a series entirely of novella-length works (like Sean Platt and Johnny B. Truant’s Yesterday’s Gone); others weave together novels and novellas into a series (J.F. Penn’s ARKANE series includes Day of the Vikings, One Day in Budapest and One Day in Budapest, all of which are novella-length.)

Although series are generally associated with commercial fiction, they’re also an option for more literary authors: Joanne Harris, for instance, turned Chocolat into a three-book series, and wrote Blueeyedboy and Different Class as sequels of sorts to Gentlemen and Players. She writes on her website:

“So technically, this is a trilogy (I’ve always rather liked trilogies) although each story stands alone, and can be read in any order. […]I’m very fond of Straitley. One of the reasons I wrote Different Class is that I enjoyed writing his voice so much that I wanted to revisit him. ”

One of the big reasons why authors write series, of course, is simply because they enjoy them! K.M Weiland, who’s written a number of successful standalone books, had this to say about writing a series:

Last year, I began my first-ever series when my originally standalone portal fantasy Dreamlander turned into a trilogy on me. Outlining the follow-up books has been an entirely different, multi-faceted, and incredibly rewarding experience.

When I wrote Lycopolis, it was intended as a stand-alone novel … but after I decided to self-publish, I felt there was scope for a trilogy. My reasoning, as an author, was probably similar to most indie authors’:

Why Readers Respond Well to Series

Like all authors, I’m also a reader! And as a reader, I enjoy series of novels – whether traditionally published (I tore through Sophie Hannah’s Culver Valley Crime novels earlier this year) or self-published (I read the whole of J.F. Penn’s London Psychic trilogy on holiday last summer).

So why do series work for readers?

What are the Drawbacks of Writing a Series?

While I’m a big fan of series, from both the writing and the reading side of things, I’ll admit they can have drawbacks too.

As an author, one potential problem is boredom. Maybe you enjoy writing lots of very different stories, and you don’t want to stick with one setting and one set of characters – or even one genre or style.

As a reader, a series can feel like a big thing to get into. When I see massive series of eight or so books, I feel daunted even starting! (Authors can help here by writing shorter series, by creating sets of 2 or 3 books within a long series, or by writing a reasonably stand-alone book to serve as an introduction to the series.)

Ultimately, of course, no author has to write a series. But a series of books – whether loosely linked or closely following one another – can be a great way to draw readers in and give them a rich, detailed story to enjoy.