Internal and External Conflict: Why Your Story Needs Both (and How to Do Them Well) 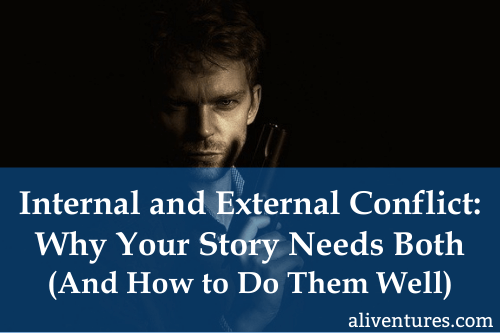 All stories, however short, need conflict: a clash between two (or more) people, ideas, or even motivations. Conflict is the engine that powers your story, driving it forward.

Without conflict, there’s not much of a story. Your main character knows what they want, they pursue it wholeheartedly, and nothing stands in their way. That’s not a story – it’s an anecdote.

So if your story doesn’t seem to be working, if the pacing feels slow or the plot seems thin, then that might be due to a lack of conflict.

And if your story feels rather one-dimensional, then that could be because you only have one type of conflict.

The most obvious type of conflict in literature is between a “goodie” and a “baddie”. This type of conflict comes up a lot in the bedtime stories I read to my 6-year-old son. Superheroes fight supervillains … and the heroes prevail.

But even in those stories, there’s often some other element of conflict. For instance, in one of the Spiderman stories, Peter Parker is enjoying a trip to the zoo with MJ … but he has to sneak off and don his spidersuit (along with his secret identity) to fight the Sinister Six.

As adults, we expect our stories to have multiple layers of conflict. Take the Avengers movie, for instance (a family favourite in our house). There’s conflict between a number of different groups: between Loki and his forces and the Avengers, most obviously, but also conflict between Loki and Thanos, who he’s working with. Within the Avengers team, there’s a lot of interpersonal conflict, especially between Tony Stark (Iron Man) and Steve Rogers (Captain America). There’s also internal conflict – e.g. with Bruce Banner’s struggle to control his alter ego, the Hulk.

Internal conflict is a fight between two parts of yourself. It can be a big part of what your character suffers. Plus, it’s often crucial for character development: if the better part of the character wins the fight, then the character grows as a person.

Your character might face a struggle between doing what’s right and what’s easy. They might be under a lot of pressure. Let’s say they’re struggling to pay rent and they have the opportunity to steal a large sum of money, without anyone knowing.

Or your character might have to face doing something brave versus staying safe. That could involve an act of physical bravery – but it might also be an issue of moral bravery (e.g. speaking up at work about an unfair situation, even if that could lead to punitive action).

One of the great things about short stories and novels is that it’s easy to show internal conflict. You can bring us right into a character’s thoughts as they grapple with a dilemma – showing us not only what they decide, but why. In a movie or TV show, it’s easier to show external conflict vs internal conflict (because it’s straightfoward to dramatise).

Examples of internal conflict include:

External conflict happens when your character knows what they want and is ready to go for it … but someone or something is standing in the way.

That opposing force could be another human being (such as a school bully, supervillain, or just a neighbourhood busybody).

It doesn’t need to be an enemy or antagonist, though. Your character might be opposed by someone who’s ostensibly on their side, like a parent or friend. They may care deeply about your character’s wellbeing, but still get in the way of their goals. For instance, a friend might try to talk your character out of going for a promotion, because they’re worried your character won’t cope with the stress of the new role.

External conflict doesn’t have to be between two people. It can be between your main character and society as a whole – though this will often be shown through individual opponents. And keep in mind that you don’t need to to pick external conflict vs internal conflict: often, they’ll tie into and reinforce one another.

Another form of external conflict is environmental conflict, where nature itself stands in the way of your character’s goals. The most obvious form of this is in stories where a character is struggling to survive against the odds, in a harsh, desolate, or dangerous environment. This type of conflict could also involve a human character against wild animals.

Examples of external conflict include:

For plenty of other ideas, check out my post on Making Bad Things Happen to Good Characters.

Using Internal and External Conflict Effectively in Your Story

How, then, do you use internal and external conflict in your story? Whether you’re writing a short story or a full-length novel, these tips should help:

1. Make the Conflict Fit Your Story

The conflict should arise from your characters’ personalities and from the situation they find themselves in. Don’t just throw in lots of conflict for the sake of it. If you feel that your story needs more conflict, look at ways that could come about. For instance, if your main character is very passive, it’s unlikely to make sense for them to suddenly start a bar fight … but they might end up in a situation where they’ve upset a friend due to their inability to say “no”.

2. Focus on Your Character’s Response to the Conflict

The exact nature of the conflict within your story doesn’t matter so much as how your character responds to the conflict. Do they immediately go looking for a fight? Do they stop and work through a plan? Do they give in to despair all too soon? Their reaction can tell us a lot about them. It can also drive the plot – especially if their attempts to resolve the conflict end up creating more difficulties for them.

3. Use Your Character’s Flaws and False Ideas

What are your main character’s flaws? Perhaps they’re brave and loyal … but also rather rash. Think of ways this flaw can cause conflict or make it worse. It’s also a good idea to think about what  K.M. Weiland and others call your character’s “ghost” – the false belief they have about themself or about the world. This will often play heavily into their internal conflict, and overcoming it will be a big part of their character arc.

A good way to create internal conflict is to force your character to choose between doing “the right thing” and “the easy thing”. Whatever type of story you’re writing, there’s almost sure to be an opportunity for this. Maybe your character faces the choice between telling the truth – even though that might have unpleasant consequences – and telling a lie. Or perhaps they’re faced with a dangerous situation where doing the right thing means putting themself into harm’s way, instead of walking on by.

5. Resolve the Conflict by the End of the Story

Internal conflict is often resolved along the way within the story, though it may not be fully overcome until the character’s arc is complete. But external conflict may carry on throughout a story, particularly when it’s interpersonal. Remember, readers will want to see this satisfactorily resolved by the end of your story: we want to see the bully get their comeuppance, or the smarmy lying colleague finally get caught out. Don’t leave loose ends when it comes to major conflicts, or the reader will feel a bit cheated.

Conflict strengthens your characters, deepens your plot, and drives your story forward. Using both external and internal conflict well means you’ll craft a gripping story that draws readers in and keeps them hooked … right until the end.

Want more tips on writing fiction? Make sure you join the (free!) Aliventures email list. You’ll get my weekly newsletter emails (which cover fiction plus a range of other writing-related topics), blog posts straight to your inbox, and a couple of exclusive mini-ebooks to help you make more time for your writing.