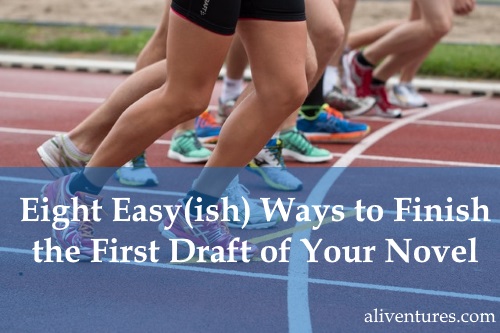 I’m doing NaNoWriMo this month – maybe you are too?

(For the uninitiated, “NaNoWriMo” stands for National Novel Writing Month. It happens every November, where people all over the world try to write a 50,000 word novel in a month.)

This is the eight book-length piece of fiction I’ve worked on (I have several unpublished manuscripts, plus three novels out there: Lycopolis, Oblivion and Dominion, and a novella coming soon). You’d think that, by now, the drafting might come easily! That’s not always the case, as you can see from my Facebook update six days into NaNo:

I know that many other writers find it tough to get through a whole first draft, too. It’s particularly difficult if you’ve never written a novel before – you might question whether you have the skills, or even the stamina, to see it through.

Whether or not you’re taking part in NaNoWriMo, here are four things to do – and four things not to do – if you want to finish your first draft.

(Note that these tips aren’t just for novelists. If you’re writing a novella, or even a long short story, they should help too; the same goes if you’re writing serial fiction – like a multi-chapter fanfiction.)

I’m going to assume, going into this, a couple of prerequisites:

So, with those in mind, here are four things to do and four things not to do, as you write your draft.

#1: Do … Figure Out a Regular Time You Can Write

If you only follow one tip on my list, make it this one! Without a regular time to write, chances are, your novel won’t get very far. Life is busy – and writing is hard work. It’s very easy to keep putting it off for a different day (or week, or month).

Some writers say you should write every day. That’s fine, if it works for you and your life: if not, don’t worry! So long as you’re writing at least once a week, you should be able to keep up the momentum on your novel draft.

During NaNoWriMo, I’ve been writing fiction four nights a week from roughly 8pm – 9pm. I’m also fitting in some extra sessions where possible, during occasional mornings while the kids are at school (and when I’m reasonably up-to-date with my freelancing work).

You might feel reluctant to fit your writing into pre-decided slots: won’t that take all the spontaneity and fun out of it? Remember, you’re still free to write at other times if you want to! These fixed slots, though, are there to help give you the space you need for your writing to flourish.

#2: Do … Book in Longer Writing Sessions if Possible

While short writing sessions – an hour, or even half an hour – can really help you focus, longer sessions are a great opportunity to make dramatic progress.

For several years, my fiction-writing time was mostly limited to a half-hour block on weeknights (5.15 – 5.45pm, after the kids’ teatime and before their bath). While the 400 – 500 words I wrote each time did slowly add up, it was definitely really motivating to be able to occasionally have a whole day of writing, and get 4000 – 5000 words down.

Every three months or so, I take an overnight break at a local hotel so I can write: just me and my laptop, undisturbed, from 2pm one afternoon until 11am the next morning. You might not be able to get away overnight, but maybe you could block out a full weekend day to write. Or how about getting out to a coffee shop for a full morning or afternoon?

#3: Do … Find Someone to Hold You Accountable

You probably won’t be ready to share your work itself with anyone while you’re writing – but that doesn’t mean you need to stay quiet about it. Find someone supportive who you can share your progress with, on a regular basis.

This could be your spouse or another family member (if they “get” writing and won’t be unthinkingly discouraging), a writing friend, or even a whole group of people. I’m sharing my NaNo wordcounts daily on my Facebook page (a fair few of my friends and family members are writers too – and several are also taking part in NaNo). Wanting to have a good wordcount to share helps keep me focused.

I’m not the greatest person at asking for help (just ask my long-suffering husband) – so if you struggle with this too, I do understand how hard it can be to reach out. But I know, and I’m sure you know too, that most people enjoy helping, if they’re in a position to do so.

The type of help and support you need might be:

(Of course, at some point you’ll almost certainly want writing-related help from a workshop group, beta readers and/or an editor … but that’s probably not what you need while you’re still trying to finish the first draft.)

Do ask for what you need. If you’re having a bad writing day (or week, or month), reach out to friends who’ll understand. Again, if you don’t have anyone, feel free to tweet me: @aliventures.

With practical help, again, do ask – instead of just hoping that the people around you will offer. Be clear (and unapologetic) about what you’d like from them: e.g. you might ask your partner, “could you take the kids to football on Saturday mornings so I can write?”

If you’re stuck on a scene of your novel, don’t spend days and days fighting your way through. You’ll lose momentum, and you may well lose all enthusiasm for your novel.

Maybe it’s just not quite the right fit, and you’ll be able to figure out how to make it work after you’ve drafted the next few chapters. Maybe it’s a scene of boring-but-necessary information that you could just summarise quickly for your own purposes, then work gradually into the novel during the next few scenes.

Another place you might get bogged down is with research. I know many authors find researching fascinating and fun (and perhaps a little easier than writing) – this can make it very tempting to carry on reading and reading, looking to uncover more information. While research is important – and, for many genres, crucial – it’s worth keeping in mind that you can always go back and do more research after your first draft is complete.

I know I’ve just told you to move on if you’re stuck on a scene – and that’s not what I’m talking about here. Some writers like to dart around, skipping huge chunks of their story to write the bits they’re most interested in.

While that’s fine if it works for you, it can often cause more problems than it solves. You might find it tricky to keep track of the plot, and details like who’s where, who knows what, and so on. You’ll almost certainly find it difficult to construct convincing character arcs: if you write chapter 20 right after chapter 1, it’ll be tough to fully account for the ways in which your character develops in chapters 2 – 19.

Generally, it’s best to work in a linear fashion, starting at the beginning and moving forward chapter by chapter. Yes, if you get stuck in the middle of a particular scene, you can move on to the next – but try to make sure you have 90% of your story complete, rather than leaving massive gaps all over it.

#7: Don’t … Worry Whether Your Writing is Any Good

There are lots of things I like about first drafts: the sense of possibility, the freedom to create, the great ideas that crop up that I’d never have thought of during the planning …

But one thing I don’t like is the all too frequent fear that my writing is no good. That my scenes are trite, my descriptions non-existent, my characters boring. I know – from talking to quite a lot of writers – that I’m not the only person who goes through this. And yet I know that I (and they!) produce perfectly good stories at the end of the process.

It’s very hard to judge the quality of your work while you’re in the middle of creating it. There probably will be some scenes that fall flat, some lines of dialogue that don’t ring true, and some dull passages you later need to cut out. But none of that needs to concern you right now. Your job is to keep on going … you’ll be able to cut and polish your work later.

I nearly titled this section “don’t edit while you write,” but that’d be a tad hypocritical of me! I spent last Wednesday evening editing a scene I’d already written – the rough draft was very bare bones, and I wanted to add more to it before moving forward.

First drafts are messy, and sometimes it might make most sense to go back and redo a scene before you go forward (perhaps, like me, you have a scene that’s important to the plot and woefully under-written – or maybe you have a scene that you abandoned in frustration but you now know exactly how to make it work).

So – it’s fine to edit, a bit, while you’re drafting. But make sure you’re striking a sensible balance: don’t try to perfect each scene before you go on. Over the course of a week or a month, you want to be mainly making forward progress – not repeatedly looping back to earlier chapters.

Whatever you’re writing, however long (or short) it is, I hope these suggestions help you get from the first words to “The End”.

If you’ve got a tip that’s helped you to complete – or at least make progress with – a novel draft, do leave a comment below to share it with us.

Also, I’d love to hear how you get on with your draft! Feel free to tweet me (@aliventures) or email me at any time (ali@aliventures.com) to share how it’s going.