Where to Find Freelance Writing Jobs (and Where NOT to Look) 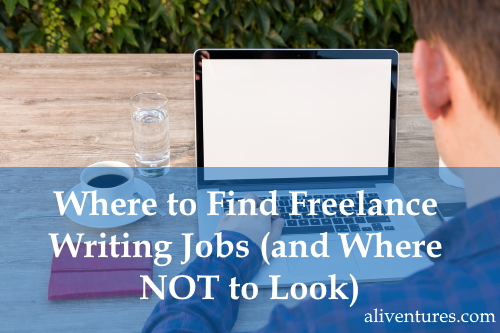 This is the third post in our series on freelancing, following on from our posts on reasons to give freelancing a try and mistakes to avoid when starting out.

Whether you’re just starting out with freelancing or whether you’re in a position where you want to take on more work …. you might be wondering where best to look.

The most obvious freelancing jobs tend to be on sites like Textbroker and Upwork. These can be easy to find and bid on – but they often result in a “race to the bottom” as you’re competing against other freelancers. That means you may end up asking for less money than you should.

Some freelance writers, particularly those new to freelancing, think that these jobs represent “normal” freelance rates. But that’s not true! There are loads of freelancing jobs out there that pay better: you just need to know where to look, and you need to be prepared to put in a little bit of extra work.

Where to Look for Freelance Writing Jobs

Here are five of my favourite places to find freelance writing jobs:

The ProBlogger Jobs Board

This job board has lots of gigs going (you’ll normally find anywhere from about one to five jobs being posted daily during the week) and most are aimed at freelance writers. There are also occasional jobs for other types of freelancers, like developers and designers, and a few jobs looking for full-time writers.

Top Tip: The first part of the job board (with a greyish blue background) shows “featured” job listings, where the advertiser has paid extra. These jobs aren’t necessarily any better than the non-featured ones, so do make sure you scroll down to see the most recent of those. If there are a lot of featured jobs, you may need to go onto the next page.

This website has been running for a good long time – I remember using it when I was brand-new to freelancing, back in early 2008! Each weekday, it lists writing jobs from a number of sources, so it’s a useful place to scan instead of checking multiple places manually.

Top Tip: Keep in mind that Freelance Writing Jobs doesn’t vet the jobs they’re listing, and most jobs are listed with just a title (no pay rate) – so take a careful look at the details of anything you apply for.

Make a Living Writing’s List of Markets for Freelance Writers

The blog Make a Living Writing has a great list of markets (mostly blogs, but also some magazines) that pay writers. This is a fantastic place to turn when you’re looking for freelancing work, as many of these won’t ever advertise for writers – they simply use freelancers who pitch them an idea. I started writing for one of my favourite clients (Craft Your Content) because of their entry on this list.

Top Tip: It can take a while to hear back when you send in a pitch (and you may find that some websites don’t respond at all). Don’t let that discourage you – just move on to someone else on the list and pitch them instead. The more pitches you send, the closer you are to finding a new steady source of writing work.

The Write Life’s Lists of Publications

The Write Life is a great all-round site for freelancers, but their regular lists of paying publications are particularly handy. These are often on a specific topic, so you might want to dig around to see what you can find that’s just right for you. You might start with one of these recent ones:

Magazines or Blogs You Read

Another avenue that some new freelancers don’t consider is looking at the publications that you already read. Do you subscribe to any magazines, or buy them regularly? A lot of their articles may well be written by freelancers. If you look in the very front of the magazine – usually before the contents pages – you’ll often find the names and contact details of the editor(s).

The same goes for websites you read. Look at their Contact or About page to see if they take freelance posts. Some will have a “write for us” page (like Craft Your Content here).

If you want even more options, Evan Jensen has written a great list for Make a Living Writing – Content Writing Jobs: 10 Handy Places to Get Hired Online.

Where NOT to Look for Freelance Writing Jobs

While I’m in the lovely position currently of having plenty of freelancing on (in fact, I’ve had to turn down work from several of my clients), I’ve also spent my share of time hunting for work.

These are a couple of places I don’t recommend, though.

“Content mills” are sites like Textbroker and Upwork that don’t pay well at all. I know several writers who’ve used them (and I signed up for a few myself in my very early days) … and jobs tend to be really badly paid. Plus, the jobs you get won’t be for large, reputable sites – so you won’t even get a useful piece for your portfolio.

While I’m sure there must be some decent writing and editing jobs on Craigslist occasionally, I don’t think I’ve ever actually seen one! The jobs listed on Craigslist tend to be vague, ill-paying, or both, and it’s not a great place to turn when you’re looking for work.

If you really do want to keep an eye on what crops up on Craigslist, just check out Freelance Writing Jobs’ daily listings, as they round up Craigslist writing/editing positions so you don’t have to trawl through them.

Finally … I know how stressful it can be when you’re struggling to find freelancing work, especially in your early days freelancing. The good news is that once you have your first few clients, it becomes much easier to get more, because word of mouth kicks in and because you’ll have built up a portfolio of work.

So keep on looking for positions that would be a great fit for you, and keep pitching blogs/magazines that you’d love to write for. A few months from now, you might well find that you’re having to turn clients away.