Academic Writing: Should You Ever Write for an Essay Mill? 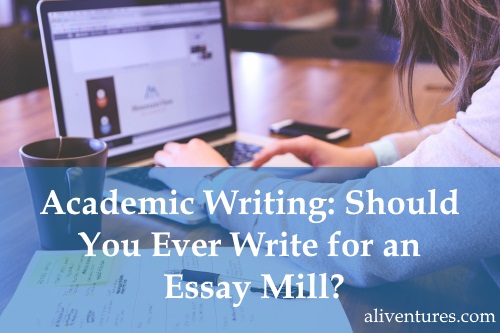 If you’ve been freelancing for any length of time, you’ve probably come across sites that sell essays to university students.

These are “essay mills”.

Briefly, in about 2008, I ran a blog about student life, and I was constantly approached by this type of site, wanting to advertise. Since then, on Aliventures, I’ve been approached by plenty of essay mills wanting to provide me a guest post (of dubious quality) in return for a backlink.

As a freelancer, I know that these sites are a market for writers, too – often desperate writers. And I’ve come across plenty of job ads for writers willing to write academic essays.

If you’ve been reading Aliventures for a while, you’ll know I’m not normally particularly outspoken. I’m generally happy to agree to differ with other writers, and I can see the plae for a lot of things that i might not personally agree with or want to write.

But essay mills are a step too far.

So I’m coming out firmly on this and saying you should not write for an essay mill, ever, or buy from one.

They’re no better than scams.

Oh God, I wish someone could write my essay for me and I could just hand it in tomorrow to score a 1st. If you have similar thoughts, take instant advantage of our 20% Discount NOW …

In the US, essay mills lie about their purpose, saying things like:

It is true that submitting plagiarized writing is dishonest. We provide our services for MODEL writing only. We are not encouraging you to submit our essays as your own. However, there might be circumstances that call for buying an essay or a piece of writing. Thus, you can become more productive and your work more efficient. (PrintWritings.com)

The services we provide are not prohibited by any colleges or universities and are LEGAL.
Use the paper you get from us to: Learn more about your topic; Write the paper yourself using our sample as a mockup; Apply referencing and paraphrasing; Cite our paper directly with correct references.

However, even with sites that have these false disclaimers, it’s obvious from the testimonials and the language elsewhere that students will be buying essays to sell.

After all, who would pay $100 or more for an example essay to simply learn from? If you want a sample to help you understand what your teachers or examiners are looking for, there are dozens of better ways to get one (like, oh, asking whoever teaches you? Or asking people in the year above you?)

And if this is just a sample essay, why would it need to be 100% plagiarism free? Who cares – you’re not going to be handing it in, are you?

But that’s what this is all about: students buying essays to pass off as their own work.

This is little better than copying off the person sitting next to you in an exam.

I’d be willing to bet good money that the majority of purchased essays are simply submitted without a word changed. Perhaps some get a quick going-over by students wanting to make sure the writing reads like their own … but frankly, I can’t imagine that most students engaging in this sort of chicanery are smart enough to even bother with that.

Why Writers Are Responsible, Too

So why do writers bear a moral culpability here? After all, if the student wants to do something immoral (submit someone else’s work as their own), why’s that the writer’s fault?

Perhaps they provided the essay for the ostensible purpose of being a “sample” to learn from. (I’d argue that anyone working for an essay mill knows exactly what the customers are buying those essays for.)

I believe that, as writers, we bear a moral responsibility for our work.

If we write something knowingly and deliberately false, and it causes harm, that’s on us.

If we use our talents to serve an immoral cause – writing a “how to get away with abusing your partner”, for instance – and crimes are committed as a result, that’s on us.

And if we write for dodgy essay mills, and a student achieves a result they didn’t deserve (or is thrown off their course for plagiarising), that’s on us.

This isn’t to say that the other people in these scenarios don’t bear any responsibility too. Of course they do. But we can’t dodge it either.

Writing for Essay Mills Isn’t the Same as Ghost Writing

Some writers – or essay mill owners, or students – might argue that if you write an essay that someone slaps their own name on, you’re essentially providing ghost writing services.

I am a ghost writer. It’s not a large part of what I do, but I have two current clients (and a bunch of past ones) who I write pieces for under their own names.

This is a normal, legitimate, business practice. My clients, quite reasonably, don’t tend to tell people that they’re using a ghost writer – but equally, they’re not going out there saying “I promise that this is all my own work and I deserve a recognised qualification for it” – which is the promise that a student makes with every essay they hand in.

Writing for Essay Mills Isn’t the Same as Editing

Let’s clear up another potential misconception: that writing someone’s essay for them is not very many steps removed from editing the work they have produced by themself.

Let’s say you’re a student. You write an essay, and you ask a classmate to look over it for you. They suggest a couple of paragraphs where your thinking could have been clearer. You also ask your tutor to look at your finished draft. They point out that you haven’t drawn a clear conclusion, and that your referencing is haphazard at best. You revise the essay, fix your references – and gain a slightly higher mark than you otherwise would.

This isn’t cheating: this is learning.

It’s normal and expected in academic life that you’ll receive feedback on what you write – you don’t have to hand in a rough draft that no-one but you has ever set eyes on.

But let’s be clear: getting someone’s opinion on what you’ve written, and making adjustments accordingly, is a very long way away from asking them to write it for you.

If your friend was to, say, rewrite the essay for you line by line and add in their own ideas, better references, and so on, that would be the point at which the essay would stop being your own work.

Between 2003 – 2006, I was an undergraduate student at the University of Cambridge, studying English Literature. We had short, intense terms: I’d write at least a 1,500 word essay a week for eight weeks running.

Unsurprisingly, I developed a bit of a system for writing essays. From research to finished draft, my essays took me around six hours each. Even if I dropped my hourly rate to $50/hour, that’d be $300 for a 1,500 word essay.

Can you see why paying $100, or even less, for an essay is not going to get you something that’s particularly good?

Cheap essay mills won’t provide high-quality essays, because writers who can actually write won’t work for them. (The fee you pay doesn’t all go to the writer, remember.) They’ll find a better paid job.

Many students who’ve used these services report receiving essays that were of shockingly poor quality – far worse than they could have written on their own.

Essay Mills Might Well Screw You Over as a Writer

For a moment, I want to stop thinking about essay writers and essay buyers and focus on the middle man: the owners of essay mills.

Who are these people? I think it would be reasonable to hazard a guess that they’re not exactly the most principled individuals.

They’re running a business – making money, potentially quite a lot of – by helping students to cheat.

Do you really trust that they’re going to pay you in full, on time, every month?

I wouldn’t! They’ve already shown, by dint of the business that they run, that they’re unscrupulous.

And what if their site ends up falling foul of laws? There are already calls for such sites to be made illegal in the UK. The site you’re writing for might disappear overnight – taking your money with them.

What if You’re Desperate?

Can I imagine a circumstance under which I’d write for an essay mill?

Sure. I’m a writer: I can imagine a lot of things.

So here’s the scenario. Let’s imagine all my other freelancing gigs have fallen through, and I’m at the point where I’m going to be unable to feed my kids. There’s no freelancing work available at all, except writing for essay mills.

Under those circumstances, I’d probably put my moral qualms aside and go for it.

But as matters stand, I can’t see any reason why any writer needs to write for an essay mill. There are plenty of other types of freelancing work out there – work you can be proud of. If you’re struggling, Carol Tice’s site Make a Living Writing is packed with good advice.

Don’t write for essay mills: if no-one did, they’d all go out of business within days.

Don’t buy from essay mills: it’s a waste of your money. If you’re so busy that you’re struggling with your course requirements, talk to your tutor. If you’re worried about your essay writing skills, get help from your university – there’ll be a course or class that can help.

I’m open to hearing other opinions on this, though. If you’ve written for essay mills, and you feel that I’m missing something, feel free to share in the comments!