Five Easy Ways to Write in a More Conversational Style 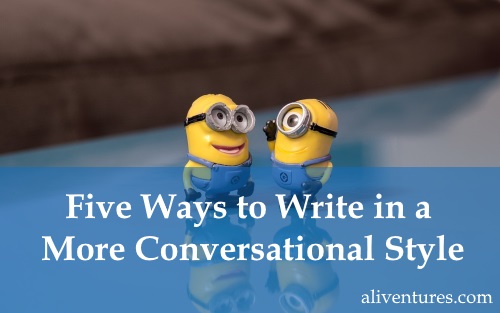 If you’re a blogger, you’ve probably been told at some point that you should “write in a conversational style.”

It’s common advice – for some book authors, not just for bloggers. When I wrote Publishing E-Books for Dummies, Wiley wanted a conversational style too.

Real life conversations, though, have a lot of features that don’t seem to support good writing. In a conversation with friends, you might:

A disjointed, rambling blog post full of references that no-one will understand and written with non-standard grammar isn’t going to be a great post.

So what do bloggers, editors and publishers mean when they ask for a “conversational style”?

I’m going to take you through some key ways to write in a conversational style … with concrete examples of how you can achieve each one.

Conversational writing is fairly informal writing. I like to think of it as if I’m writing an email to a casual friend: I’d make it grammatical and coherent, but I wouldn’t be stuffy!

Two easy ways to make your writing more informal are to:

#2: Talking Directly to the Reader

Conversations require more than one person … and this is something you can use in your blog posts (or articles, or book chapters). Write as if you’re talking directly to your reader: this comes across as friendly and immediate.

For instance, a few paragraphs ago, I didn’t write:

“This post will discuss some key ways to write in a conversational style … with concrete examples of how to achieve each one.”

“I’m going to take you  through some key ways to write in a conversational style … with concrete examples of how you can achieve each one.”

While this isn’t something you have to do to achieve a conversational style, I find it often helps to bring in some of your personal experience with the topic at hand.

That could be something as simple as a single sentence – e.g. in the introduction, I explained, “When I wrote Publishing E-Books for Dummies, Wiley wanted this type of style too.”

Just like using “you”, using the word “I” helps to draw a closer connection between you and the reader.

#4: Having a Sense of Humour

I’m not a naturally funny person and I sometimes have to make an effort with this one! But a little bit of humour can make your writing more engaging and accessible. You don’t have to crack jokes – you might gently poke fun at yourself, for instance.

In my post Why You Should Stick to One Name for Each Character in Your Novel, I wrote:

I’m “Mummy” to my kids, occasionally “Mum” (they’re not convinced that I even have another name).

While it’s not exactly laugh-out-loud funny, I’d hope that line at least raises a wry smile from fellow parents.

#5: Being Open to Responses

In a conversation, you (hopefully!) don’t do all the talking.

One simple way to make your posts more conversational is to ask for responses: to invite comments where readers can tell you what they think about a particular topic.

Like most bloggers, I tend to do this with an explicit invitation at the end of the post (and you’ll see one in a moment!) – but sometimes it can be helpful to pave the way for comments earlier on. This could mean writing something in your introduction like, “I’m sure I don’t have all the answers – so as you read through, if you feel that I’ve missed something out, do share it in the comments.”

So, over to you … what would you consider to be hallmarks of “conversational” writing? Do you deliberately try to make your own writing conversational – and if so, how do you do that? I’d love to hear your thoughts in the comments below.